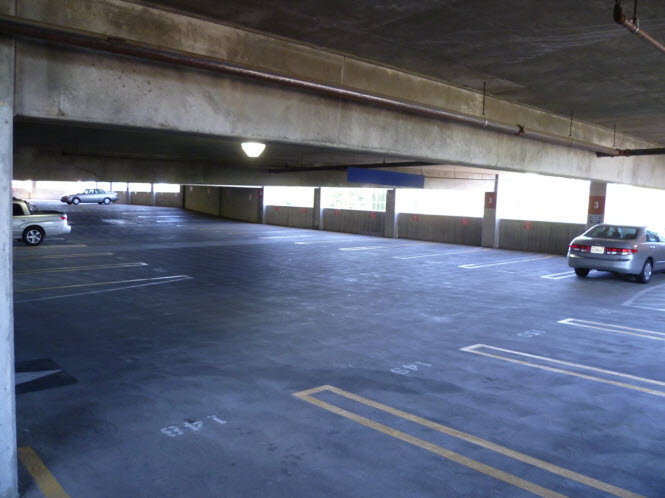 Two weeks ago the Vanguard put forward, once again, its proposal to put the entrance to a parking garage on Olive Dr. adjacent to the Design House.  It would then go over the tracks and consume the current parking lot by the Boy Scout Cabin.  The idea there would be to get people to turn onto Olive and get out of their cars at F and 1st streets, which would put people within about three blocks of most of downtown.

At that place there could be free trolleys and bike rentals to allow people easy access to the rest of the downtown.

Michael Bisch was rather disparaging, calling it “a fanciful op ed.”

He wrote, “As for your proposed Olive Drive parking structure project with visitors and employees streaming by bicycle and trolley into a pedestrian and bicycle only Downtown, the DPTF [Downtown Parking Task Force] is operating in the real world with real data and was tasked with providing viable solutions. We don’t have the luxury of simply ignoring the data, human behavior, Council directives, and generally making it up as we go along. There has never been any input to the DPTF of any kind similar to what you are proposing.”

The interesting thing is, later that same week, he went ahead and proposed a similar structure, except it would be in the Boy Scout Lot without the Olive Drive entrance.

Mr. Bisch told the Enterprise that the Downtown Parking Task Force had to give specific guidance about a garage or “the council will lose sight of the issue of increasing the parking supply.

“Let’s temporarily focus on this space, see what can be done there and if the initial feasibility says ‘Yeah, this can be done,’ put a funding scheme together and then let’s do it,” Mr. Bisch told the Enterprise. “If that initial feasibility study says that site is configured all wrong … let’s strike it off the list and look at a new site.”

“The Boy Scout Cabin lot sits on the south side of First Street where F Street dead-ends into First,” the Enterprise reported.  “While Bisch isn’t sure whether the space can accommodate a parking structure – that assurance would come through the feasibility study for which he’s aiming to gather support – he believes it’s the most logical space for a new garage.”

“All the research that we had been given said that the greatest demand for parking is in that part of the downtown,” Mr. Bisch told the Enterprise. “That’s the most impacted area, that’s where the consumer wants to park … (and) we want people to park in the periphery of the downtown.”

The Enterprise noted that the plan would require a bridge that would connect the new parking structure to the existing garage above the movie theater.

Mr. Bisch suggested that the expansion could be financed by parking-in-lieu fees, development impact fees – particularly from the Cannery project, and parking fee revenues, with budgetary shortfalls covered by the city.

The Enterprise noted that the proposal passed the DPTF 5-4, but three of the opponents noted that they opposed the motion because of the parking garage proposal but supported the accompanying suggestion for paid parking in the heart of downtown.

In addition, a couple of the people who supported Mr. Bisch’ motion did so primarily to keep the issue of paid parking alive, which they feared would have difficulty passing, but did not necessarily support the parking structure.

For the Vanguard, it seems strange that Mr. Bisch would suggest this proposal, which would dump a huge volume of traffic on an already-congested area of the downtown.  This area has to accommodate much of the eastern flow of traffic as it seeks to turn onto Richards Blvd, go under the underpass and onto the freeway or into South Davis.

While our proposal would necessitate the redesign of the already problematic intersection and probably force the city to handle the freeway off-ramp flows differently, it would have the advantage of diverting cars from going through the underpass to the garage, which would then allow people to exit their cars and begin their downtown experience at F and 1st Street.

From our view, Mr. Bisch’s proposal might deal with the need for additional spaces, but does not address the traffic congestion and flow problems.

One member suggested what this will do is begin the process of a feasibility study.  Would such a study necessitate studying other alternatives?

That is a key question that has been unresolved. However, most people we talked to do not believe that the parking garage idea will fly.   The paid parking issue figures to be hotly contested, even if it moves forward from the Parking Task Force to the council level.

For us, the key question really is what the vision is for the Davis Downtown.

As we noted last time, how can one discuss the long-term parking issues of the Davis Downtown without discussing the larger plan?  The Downtown has increasingly become one of restaurants and entertainment.

Davis Downtown is not set up to compete for retail with regional entities.  On the other hand, Davis Downtown can attract regional interest through what it does provide that is unique – unique dining experience and entertainment.

Some have expressed the desire for the downtown to become more than that, and suggested we need more retail options.

I am mixed on that view.  The development of retail seems to be outstripping the central core concept of a downtown.  I am not suggesting this is for the better, but I fail to see how a downtown can compete with the vast open areas that have been used to create the enormous retail centers in places like Woodland, Sacramento, Vacaville, West Sacramento and Fairfield.

Moreover, we should be discussing overall how we want to lay out and design the future downtown.  Do we want more of a promenade where people can walk and bike through key portions of downtown?  If that’s the case, why do you want street parking in the core, other than for very short-term needs?

I still think creating parking peripheral to the core and then allowing for easy access to trolleys and bikes and other secondary modes of transportation may accomplish much of what the downtown hopes.

But before we can decide all of this, we must decide what our downtown should look like in five, ten, twenty years of time, and design the parking system to fit those needs.

Right now, what I see is a lot of energy going to fix a system that is largely broken beyond repair.  We are going to put in meters and allow people to park longer?  Was not the entire justification for having the time limitations to free up spaces?

It makes very little sense to put long-term parking on the street.  The longer the parking, the further away people should be willing to travel to get from their vehicle to a business.