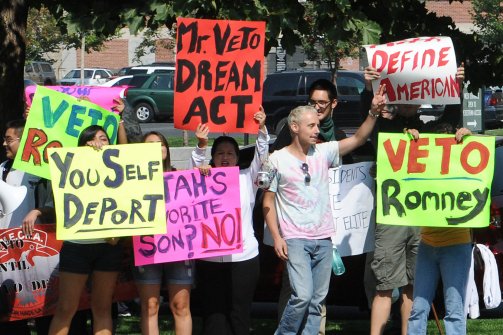 Nearly 50 years ago, as President Lyndon Johnson pushed through the Civil Rights Act, he remarked to Bill Moyers, “We just delivered the South to the Republican Party for a long time to come.”  It was a statement that proved correct.

In fact, the Democrats went through a period of time when they not only slowly lost over the south to the Republicans over the course of the next thirty years, but were completely non-competitive – with the exception of 1976 – in Presidential elections until 1992.

But demographics in this country are shifting rapidly and everyone seemed to recognize the polling results from the last election that showed the movement away from the Republican Party by, not just blacks (who have heavily voted for Democrats for the past fifty years), but also Hispanics and even Asian voters.

The growth in the number of Latino voters and the shift in the electoral fortunes in several critical states seemed to awaken the Republicans to the notion that they have to deal with immigration reform.  Now, more astute observers quickly realized that the Republicans had a deeper problem with Latinos than just immigration, but there was a general sense that the immigration issue and the stance of Mitt Romney antagonized large swaths of Latino voters.

There was a concerted effort, at least by some key Senators this year, to deal with immigration reform.  Again, I’m not sure that would have been the game changer I think some hoped for.

However, whatever hope the Republicans had to change perceptions is gone now.  That is the result of the Republican-led House effort to prohibit funding for the President’s “Dream Act,” which would have halted deportations of young immigrants – many who came here as children by the actions of their parents – if they have served in the military or are attending college.

The optics of this vote is horrendous for a party desperate to remake their image among Latino voters.

Senator Richard Durbin quickly jumped on the vote, calling the vote “shameful” and “mean-spirited.”  He said that it “shows that House Republicans have a tin ear for politics and cold hearts when it comes to compassion for young people who have only known America as their home.”

While it is easy to dismiss such comments as political banter and rhetoric, the optics here are way off if you are a Republican.  This act does not deal with the broader immigration issue.  It is very narrow – it deals with young immigrants who grew up in this country, it deals with immigrants who did not make the decision to come here but were brought here by their families, it deals specifically with people who are in the military or going to college.

Why target them?  Forget the politics, what is the policy goal here?

The program simply allows these young people in very specific circumstances to apply to gain temporary legal status and avoid the risk of deportation for two years.

As the LA Times reports, “The deferral program was largely seen as a stopgap alternative to the Dream Act, failed legislation that would give the young people a route to citizenship. The Dream Act is included in the bipartisan Senate immigration overhaul. Young people who call themselves Dreamers have become prominent in the immigration debate.”

And yet the response of Iowa Congressman Steve King is, in fact, tone-deaf.  He said, “Whatever people think of the impending immigration policy here in the United States, we cannot allow the executive branch to usurp the legislative authority of the United States Congress…  If we allow that to happen in immigration, it could happen to anything.”

So, basically, Steve King has thrown his party’s efforts to woo Latino voters under the bus in a turf battle.

This is an extraordinarily bad move from a political standpoint.  And it is a party-line situation.  Only three Democrats voted for it, while six Republicans voted against it, mainly in districts in California and Florida were there are large Latino populations.

But the damage is now done.  The message is clear.  In one ill-conceived vote, the Republicans have nullified any benefit they might have gotten from immigration reform.  The fact that this is largely symbolic makes it worse.

The Republicans have now handed the Democrats the Latino vote for at least the next generation and, with it, perhaps the keys to White House and eventually the Congress.

As the Times reports, “Except for the Senate bill’s bipartisan drafters, other Republicans have been cool to the legislation. Top Republicans, including Sen. Marco Rubio of Florida, a key author, have been working to bring Republicans on board. But a meeting with House Republicans this week showed little interest.”

Meanwhile, Speaker John Boehner has been working to reach out to Latinos.

In an op-ed in Spanish he wrote, “Making the process of becoming a legal immigrant fairer and more efficient will help America remain a magnet for the brightest minds and hardest workers.”

And then he turns around to vote for this legislation.  He might as well give up.  But I guess he can’t help himself.

Share:
Previous : A Troubling Picture Emerges of the Attacker in Davis Hate Incident
Next : Sunday Commentary: Council Must Kill Fluoridation to Save the Water Project

57 thoughts on “Commentary: Republicans Have Probably Squandered Any Chance At Latino Votes”