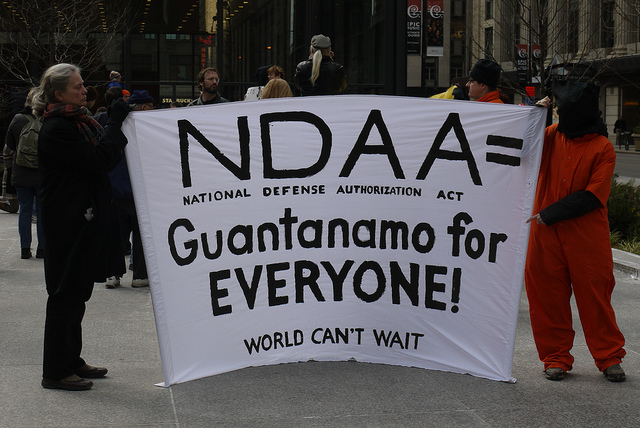 We, the undersigned Davis community groups, seek to restore our democracy by speaking out against Section 1021(b)(2) of the National Defense Authorization Act for fiscal year 2012, which subjects U.S. citizens to military detention, without trial, until the “end of hostilities,” for “substantially” supporting members of al-Qaida, the Taliban and “associated forces,” or “directly” supporting hostilities “in aid of such enemy forces.”

This sweeping legislation is now found in Public Law 112-81. Since the “end of hostilities” in the war against terror may never be decisive, there may be no end to detention for those who come under these vague provisions.

Our California senators and Rep. John Garamendi, D-Walnut Grove, voted for this law despite Garamendi’s objections to these provisions and his offered amendments that would have stripped this language from the bill. Garamendi has since been working to amend Section 1021 to require a trial for U.S. citizens who are arrested in the United States.

The National Defense Authorization Act for fiscal year 2013 has a provision (Section 1029) that appears to allow a federal trial for those arrested inside the United States under the sweeping provisions of Section 1021 (b)(2). However, our constitutional right to a trial should be available whether we are inside or outside the United States when indefinitely detained. In addition, the sweeping provisions themselves still affect other major constitutional rights.

A federal district court in Manhattan (Hedges v. Obama) recently ruled that Section 1021(b)(2) violates both the First and Fifth Amendments to our Constitution by interfering with freedom of speech and association (First Amendment) and containing vague terms (“substantially support,” “associated forces” and “directly supported”) that would leave anyone of ordinary intelligence in doubt as to what conduct falls within the scope of the statute (due process clause of Fifth Amendment).

Plaintiffs were writers, journalists and activists who feared indefinite detention if they pursued their careers in writing, speech and associational activities protected by the First Amendment. The Obama administration has appealed this decision, thereby leaving the sweeping provisions intact.

There is no guarantee that the U.S. Supreme Court would uphold the Manhattan district court ruling. “The (Supreme) Court’s conservative majority believes that matters of national security and the fight against terrorism are properly decided by the president and Congress, not through lawsuits.” (David G. Savage, Sacramento Bee, Feb. 27, 2013, Page A10.)

Since the courts cannot be relied upon, we must turn to Congress for a remedy. If we are silent in the face of this law, no action will be taken by our elected representatives. Write to Sens. Dianne Feinstein and Barbara Boxer and Rep. Garamendi, asking them to work to repeal or change the National Defense Authorization Act provisions to assure our constitutional rights.