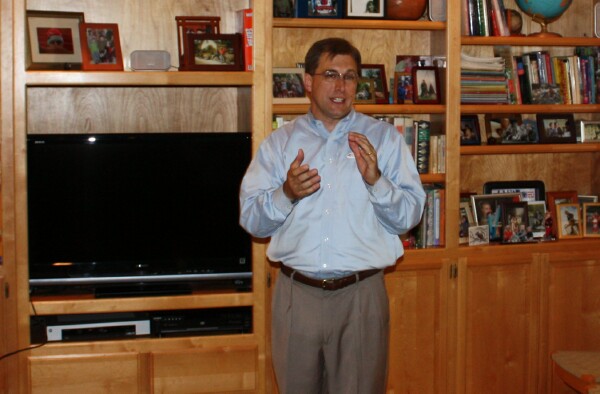 This weekend Joe Krovoza formally announced his run for the Assembly, citing his “20-plus years of volunteerism and public service in Yolo County through election to represent the 4th Assembly District in the state legislature. “

Mayor Krovoza  has led the City of Davis as its 34th mayor since 2011.  He was elected in June 2010 to a four-year term on the Davis City Council, which he will complete in full.

This weekend he released an issue statement.

FISCAL SUSTAINABILITY: “Immediately upon becoming mayor, Joe moved the city toward the tough decisions needed to improve Davis’ financial position.  Facing a projected deficit of $6-7 million over two to three years, Joe led the move to direct city staff to identify $2.5 million in cost reductions for the 2011-12 budget.  To achieve long-term fiscal sustainability, the City of Davis has reorganized its labor agreements, including changes in employee benefit systems that accomplish a significant savings in personnel costs over three years while maintaining services and providing cost-of-living increases for city employees.  To address looming pension and retiree medical liabilities, Joe’s council established a fund to ensure that the city has added resources to fulfill its commitments to employees.  Through Joe’s leadership, the city council dramatically reduced fire service costs by implementing a UC Davis/City of Davis partnership to consolidate management, training and operations protocols.  Under the integrated system, fire response coverage has been improved throughout the community.  Joe will bring these approaches and a willingness to make hard decisions to Sacramento.”

ECONOMIC DEVELOPMENT: “Joe forged a new relationship between the City of Davis, the local business community, and UC Davis to boost economic development.  Joe forged the city’s groundbreaking partnership with Davis Roots, a non-profit start-up business accelerator with the shared goal of fostering the formation and early development of new high-growth ventures.  He was a founder and leader of the city’s Innovation Park Task Force to identify lands that can contribute to job creation, support UC Davis, and match our community’s environmental values.  These approaches to job creation will provide sustained benefits for our regional economies.”

RESPECT FOR ALL: “Joe strongly supports the diversity of 4th Assembly District communities.  He actively engages all groups, joins numerous cultural events, and acts quickly to address bias incidents.  A strong believer in equal rights, Joe signed on for National Mayors for Marriage Equality.  Immediately after taking office, Joe delivered a heart-felt address to the Davis community on Martin Luther King, Jr. Day, demonstrating his enthusiasm to use his position of leadership to bring communities together.”

EDUCATION LEADERSHIP: “Joe has been a fierce and informed advocate for education since his days as a student leader.  Joe attended a trade-technical high school where he developed a firm commitment to youth and adult trade education.  While attending Pasadena City College, Joe served as the student on its Board of Trustees.  He was then a three-time gubernatorial appointee to the California Student Aid Commission where he served for seven years.  With his wife, Janet, Joe raised two daughters who attended Davis public schools, providing Joe with great perspective on what works and what doesn’t in K-12 education.  Joe’s oldest daughter served as the Davis Joint Unified School District’s student trustee and works as a teacher today.  Joe has an intricate understanding of how cities and schools partner through his three years of service on Davis’ “Schools-City 2×2 Committee.”

FOCUS ON THE ENVIRONMENT: “Joe is a life-long environmentalist, stemming from his days in scouting.  Joe led the Putah Creek Council for seven years and was its lead negotiator for the historic Putah Creek Accord of May 2000 – which established new flows to restore the creek’s historic salmon run and initiated a permanent restoration program that has attracted over $12 million in restoration projects.  Joe received Davis’ Environmental Recognition Award for these efforts.  Joe is a strong advocate for open space and wildlife protection, a solar photovoltaic user since 2001, and an avid utility bicycling advocate.  In 2006, Joe helped found Davis Bicycles!, a “back-to-our-Davis-roots” biking advocacy group.”

“Joe is an articulate and knowledgeable leader on the Sacramento Area Council of Governments (SACOG) for our region’s Blue Print Plan that integrates land-use planning, transportation and business development.  Joe is a lead spokesperson for Transportation Coalition for Livable Communities, a statewide group working to direct California’s cap-and-trade revenue toward local carbon reduction programs.  Joe is tireless in pushing the City of Davis toward its aggressive goal of carbon neutrality by 2050.  Recent examples are his successful work to add major sustainability elements to the Woodland-Davis water treatment project, and pushing for increased carbon reduction measures for the proposed 550+ unit Cannery Park development.”

“Joe will bring tremendous environmental expertise to his service for the 4th Assembly District.  He works for UC Davis where he directs the external relations units of the Institute of Transportation Studies and Energy Efficiency Center.  Through his day job, Joe affiliates with great minds in the same critical policy areas he will address in Sacramento.  Joe studied natural resources law at UC Davis and then practiced water law in Sacramento.  Last year the UC Davis Law Review published his research and analysis of a key state provision that protects fisheries below dams.”

Mayor Joe Krovoza grew up in Pasadena, where he earned the rank of Eagle Scout.  He received his J.D. degree from UC Davis School of Law (1994), where he studied natural resources and environmental law, with a focus on water law.

He began his undergraduate studies with an A.A. from Pasadena City College (1982) and concluded with an A.B. degree in Diplomacy & World Affairs and Economics from Occidental College (1985).  In his free time, he enjoys running, mountaineering, biking and unicycling, canning olives, jams and marmalades, and whitewater kayaking.  He is an avid SF Giants fan.

The 4th Assembly District represents all of Napa and Lake Counties, Rohnert Park in Sonoma County, Colusa County including Williams, northern areas of Solano County including Dixon, and Woodland, Winters and Davis in Yolo County.  The primary will be held June 3, 2014, and the general election November 4, 2014.