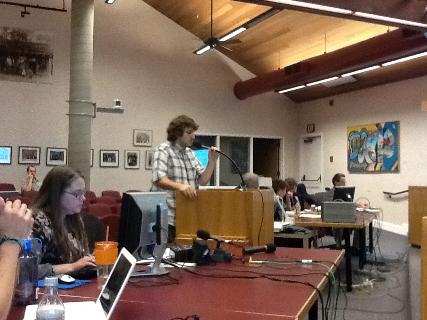 It was Councilmember Brett Lee who seemed to derail some of the discussion on the Single Use Carry-Out Bag ordinance, when he argued that the plastic bag ban was “misnamed.”

“It’s a plastic bag ban if you happen to be a supermarket, drug store, or liquor, there’s a whole broad group of businesses that are not touched by this approach,” he said.  “Are plastic bags bad or are they only bad when they come from a supermarket?”

He argued in both scenarios the usage will be reduced; he said the only question is where do we allow the consumers to have some choice.

In the draft ordinance it would mean a retail establishment that does not include a food vendor or restaurant “that provides single-use carryout bags to its customers as a result of the sale of a product.”  It could be a “retail supermarket, convenience food store, foodmart, or other entity which sells canned food, dry grocery, and Perishable Food.”  Or it could be over 10,000 feet of retail space that generates sales tax and has a pharmacy.  That would put stores like Target under the ordinance but not Big Five or Office Max.

City Staffer Jacques DeBra defended the differentiation, arguing that it provided for the largest percentage of plastic bags without impacting all businesses.

The draft ordinance would include a plastic bag ban, a 10-cent charge for paper and a greater than 10-cent charge for reusable bags, and would only be applicable to larger retailers including supermarkets, drug stores and convenience stores.

If passed, the ordinance could be effective by July 1, 2014.

However, Mayor Joe Krovoza said, “This is too selective for me.  I think it’s quite frankly inequitable.  I think it doesn’t treat businesses fairly and it doesn’t move us towards the objective.”

“I’m interested in some kind of a motion that sends us back, I want to move on it faster but I want it to be more representative of the overall objective,” he said.  “If I’m going to do something it’s going to be a meaningful act, I don’t want to do something that has people coming back to me saying, how come they didn’t have to do it and I had to do it?”

One of the crafters of the ordinance was concerned about the council change, noting that some of the smaller businesses were nonetheless very concerned that such an ordinance would put them out of business.  By exempting those businesses, the impact on the number of plastic bags in the community was minimal but the impact on the ability of small business to compete might be very great.

On September 25, 2012, the City Council directed staff to contract with ESA, an environmental science and planning firm with a location in Sacramento, to do an Initial Study/Negative Declaration for the City of Davis Single Use Carryout Bag Ordinance, in compliance with the California Environmental Quality Act (CEQA) and State CEQA Guidelines.

“The City of Davis has prepared a draft Initial Study and intends to adopt a Negative Declaration for the Single Use Carryout Bag Ordinance. Friday, January 25 marked the start of the 30 day public review period, which ends at 4:30pm on February 25, 2013,” according to a communication from Utilities Manager Jacques DeBra.

“On December 6, 2011, the City adopted a Zero Waste Resolution in which the City strives to implement zero waste strategies,” the city writes. “It is the desire of the City of Davis to conserve resources, reduce GHG emissions, waste, litter and pollution. The use of single-use shopping bags (plastic, paper, and biodegradable) have negative environmental impacts, including greenhouse gas (GHG) emissions, litter, water consumption, solid waste generation and effects on wildlife.”

The city adds, “From an overall environmental and economic perspective, the best alternative to single-use plastic and paper carry-out bags is a shift to reusable bags. Studies and impacts from similar policies adopted in other jurisdictions document that restricting plastic bags and placing fees on paper bags will dramatically reduce the use of both types of bags.”

“Despite their lightweight and compact characteristics, plastic bags disproportionately impact the solid waste and recycling stream and persist in the environment even after they have broken down,” the city continues. “Even when plastic bags are disposed of properly, they often become litter due to their aerodynamic nature. The bags can be blown out of the landfill by the wind. Plastic litter not only causes visual blight, but can potentially harm wildlife.”

The mayor supported a move that ended up not needing a motion for the city staff to come back to council after the July-August recess with options for a more comprehensive ordinance and associated timeline.

He wanted to see a list of the possible exemptions and what other communities do.  He said he wanted to hear from staff as to which exemptions they think have merit.

He sees the need for exemptions, for instance, with produce bags, but “This level of exemption seems way too excessive for me.”

As we have long anticipated, council has already removed business reporting requirements.

“Nobody cares,” he said.  “Why make them have to do it and why make someone here have to go through the reports?”

“I agree with that as well,” Councilmember Lucas Frerichs said.  He noted that while the Davis Food Co-op has already gone through the plastic bag ban on their own with charges for paper bags, “They also are not very happy with the idea that they’ll have to report.”

The council decided they did not need a motion.  Staff has their direction and will come back some time after the break with a list of possible exemptions that council can include in the final ordinance.