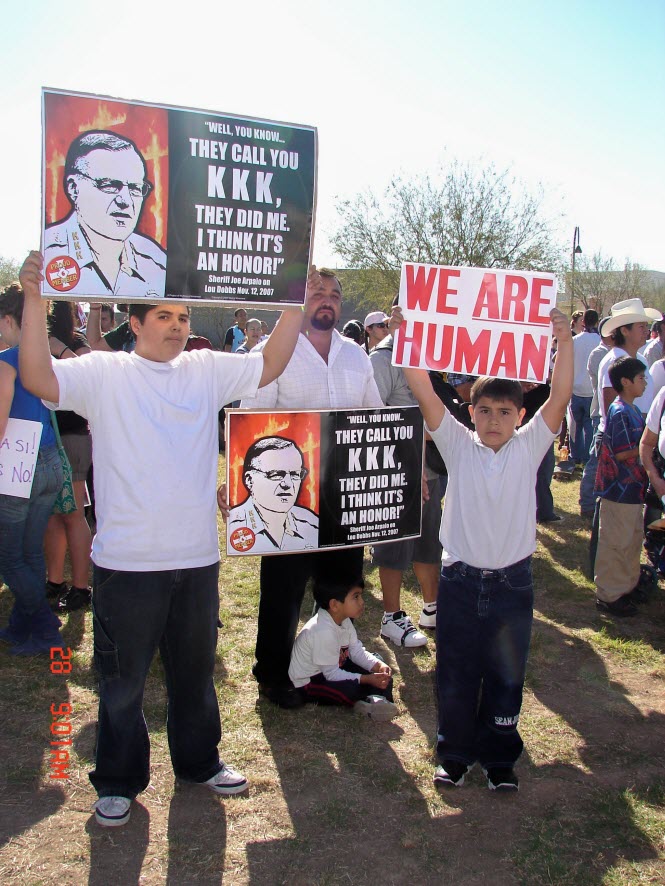 After  a three-week trial, the court found that MCSO had an unconstitutional policy of targeting Latinos for traffic stops and of detaining Latinos based on nothing more than a suspicion of being undocumented immigrants.

The court noted that MCSO admitted to using “Hispanic appearance” to determine who was suspected of immigration violations and that Sheriff Arpaio had acted upon racially biased constituent letters in deciding where to conduct “saturation patrols.”

During these “saturation patrols,” (known to residents as immigration sweeps) over 70% of people arrested were Latino – in a county where Latinos make up only a third of the total population.

As the federal court pointed out, the policy of racial profiling and illegal detentions arose from the Sheriff’s single-minded focus on arresting undocumented immigrants regardless of the cost for everyone’s civil rights and public safety.

The Arpaio decision is an enormous victory for everyone in Maricopa County – and particularly for those courageous individuals who stood up for civil rights in the face of racially charged discrimination by the very law enforcement authorities responsible for protecting the community.

The court’s ruling established that no one is above the law and put an immediate stop to the MCSO’s policies.  The order lifted a shadow of fear that had left a third of the county’s residents unable to go about their daily business without the fear of being pulled over and interrogated about their right to be in their own county, just because they are Latino or look Latino.

Unfortunately, local sheriffs and police chiefs in many parts of the country have adopted similar policies, with similar patterns of constitutional violations as they have become entangled in local immigration enforcement efforts. Alamance County, North Carolina, is one example.

The U.S. Department of Justice has brought a lawsuit against the sheriff there for the same pattern of discrimination against Latinos in traffic stops, again by an agency that has publicly announced a focus on going after undocumented immigrants.

Indeed, Arpaio’s practices were entrenched and formalized as a matter of state law when the Arizona legislature passed its anti-immigrant SB 1070 law.  From Arizona, these policies spread to other states including Alabama.

What we have learned from Arizona is that when local officers are forced to go after undocumented immigrants – whether as a matter of a sheriff’s dictate or state law – they will default to using racial profiling and illegal stops in violation of people’s rights. This poses a danger to civil rights and liberties well beyond one state.

In fact, prominent police chiefs and sheriffs from around the country urged the Supreme Court to hold Arizona’s SB 1070 unconstitutional because it would be impossible for local law enforcement officers to determine who’s an undocumented immigrant, and that trying to do so would divert critical resources away from the real job of policing our communities.

That is exactly what has happened, spurring growing opposition to the troubling entanglements between federal immigration authorities and local and state law enforcement.

Recent polls show that the vast majority of Americans are tired of such unconstitutional and unwise immigration policies and want Congress to enact commonsense immigration reform that puts immigrants who are already making contributions to our communities on the road to U.S. citizenship.

So what does Joe Arpaio have to do with commonsense immigration reform?

As Senator Michael Bennet of Colorado said on the Senate floor right before the historic passage of S. 744 by a 68-32 margin, immigration is the federal government’s responsibility.

The bipartisan Senate bill is a compromise measure that puts extraordinary – indeed, wasteful and excessive – resources toward border enforcement but also provides for a road to citizenship and significant improvements to the immigration detention and deportation system.

The Senate wisely carried out its job of regulating immigration at the federal level. We hope the House of Representatives takes a similarly sensible approach.

The House Judiciary Committee’s passage of the so-called “SAFE Act” unfortunately attempts to open the door to more state and local meddling in immigration matters.

The proposal would effectively apply Maricopa County’s unconstitutional example throughout our country, leading to the rampant violation of our most basic American freedoms and leaving communities less safe as distrust and fear of the police takes root.

Let’s be clear:  Any member of Congress who votes to give state and local police the power to do immigration enforcement is voting to open the door to widespread racial profiling and illegal detentions throughout the United States.  That can be no part of real reform.  America deserves better.