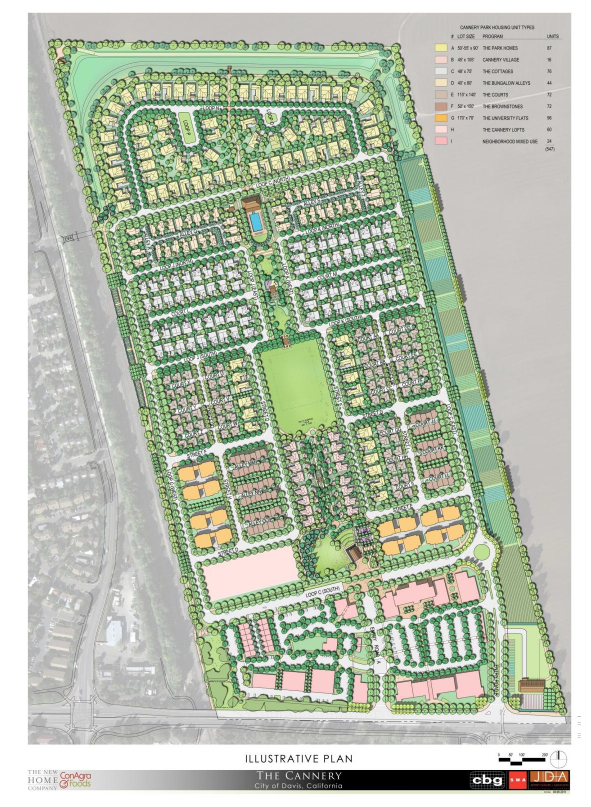 The Cannery property is the last major parcel of land in the city of Davis that would not have to face a Measure J vote to convert it into a housing development.  That fact has made it an inviting target for ConAgra, the owner of the parcel and a major agricultural corporation.  However, a number of citizens have told the Vanguard that if the council does not put the matter to the people for a vote, they will do so themselves.

In the past week alone, the Vanguard has had a surprising number of different people from a variety of different sectors in the community express concerns about the current plans for development of the site.

The first problem is that, at the same time that Davis is looking for land to keep companies like Bayer CropScience in town rather than moving across the causeway to places like West Sacramento, the city is about to convert its largest currently undeveloped parcel of land, currently zoned for industrial uses, into housing.

City officials have been adamant that major investors, startups and businesses deem the site to be unsuitable for a business park due, for the most part, to its distance from reliable highway transportation and its lack of visibility.

However, others continue to believe that the lack of interest in a business park here is due largely to the city’s inability to enforce current zoning on the site.  They believe that if the parcel were properly marketed, it would be enticing to those seeking business startups from the university.

What is clear from the discussion yesterday and at other points in time is that the city will have a difficult sell to make to the public that they have no land for business and economic development, if they swap the 100 acres of land on Cannery for housing.

This problem might be insurmountable for ConAgra and the city, but the other two major objections are more project-specific.

The first of these problems is that the development is very ordinary.  It is a 100-acre property that would see a project that consists of 547 residential units and 45 accessory dwelling units.

As one developer told us this past week, the city of Davis still holds up Village Homes as its iconic residential development, even though the development itself is now 35 years old.  That means that for the last 35 years, the city of Davis has failed to develop any new innovative neighborhoods – and Cannery is no different from anything else developed in the past 35 years.

The cite fails to live up to the sustainability features of West Village or the innovation of Village Homes.

Along similar lines is the concern that the site itself is problematic, nestled against the railroad tracks on the western boundary, with the only vehicular access on the already heavily-congested Covell Blvd.

“The bad nature of the site means that the developer should expect to mitigate the air quality, greenhouse gas, transportation adverse impacts,” Mont Hubbard told the Planning Commission this spring, speaking for the board of Davis Bicycles!  “An obvious way to do that is to provide a way for people to use bicycles and pedestrian transportation more.”

He added, “It simply isn’t going to happen if they have to cross Covell Blvd. on foot or by bicycle.   The way to get people to use non-motorized transportation is to provide them a safe avenue to do that.”

As Robb Davis, who serves on the Bicycle Advisory Commission, noted, the current plan is fraught with danger.

“The problem that I’m seeing with the project as it’s laid out now is basically we have one grade-separated crossing on the southwest side of the project,” he told the commission.

The result of that configuration, he said, is that it will lead people to the H Street tunnel, which many consider a dangerous piece of bicycle infrastructure.

“Whatever happens with that grade-separated crossing it’s going to require people to use an existing piece of bicycle infrastructure that is arguably the worst in the city, which is the H Street Tunnel,” he said.  “Any connection between the east and the west parts of Davis, bicycle wise, will use that tunnel.”

This issue of accessibility is a huge factor in people’s concern for the site design.

ConAgra, if they are committed to building housing on this site, cannot do much about those in the community that question housing, but they can change the design to counter other criticisms.

In the past few weeks, a number of developers have shown the Vanguard some interesting new, and even exciting, ideas for various sites around town that break from the current stale thinking about housing developments jammed into tight quarters with limited access points.

Right now we believe that if the matter were placed before the voters, it would be defeated.  There are some in the community that believe all housing will be defeated, but we are not so sure.  Housing that incorporates concerns about site design, accessibility and sustainability has a chance if presented to the community in the right way.

It was not that long ago that the Wildhorse development itself was placed on the ballot and, though it was a bitter and contentious campaign, it prevailed in the end.

We would urge both the council and ConAgra to re-think the site design before it is too late.  A vote here would not be friendly toward building new high-density housing on this site.