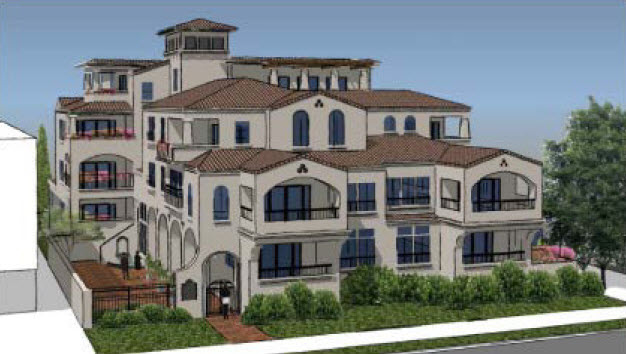 After listening to a mixture of different perspectives on the proposed project along B Street, the council went through three different motions before coming back to almost the place they started.  They voted 4-1 to approve the staff recommendation, with the modification from Mayor Joe Krovoza that the plan be site-specific and not impact the zoning of adjacent properties.

The project requires an amendment to the Core Area Specific Plan and Planned Development standards to allow a Floor Area Ratio of 2.0 (where 1.0 is permitted unless there is a bonus) and density of 42.4 units/acre (where 24 units/acre is allowed).

While the project goes up as far as a fourth story, the applicant and architects argued that the setbacks made it virtually impossible to see the fourth story from the street.

Difficulties in adhering to stipulations on owner-occupancy requirements led the council to briefly put forth the motion of a senior-only age restricted project that would enable the city, by law, to restrict occupancy to those over the age of 62.  However, the project applicant had concerns about filling the project, and the council was ultimately uncomfortable with that idea.

When the Senior Citizen Commission reviewed the project, they unanimously approved a motion that the project should not be age restricted, but they applaud the effort to make it as universally designed as possible, and to promote it as such.  It was clarified to the Vanguard that they were not opposed to age restrictions, but did not feel it was necessary.

The Planning Commission had unanimously recommended a denial of the application, citing the inconsistency with the plan for B Street that was approved in 2007, with no subsequent city council direction for a changed vision, as well as the potential for occupancy by groups of undergraduate students – particularly given the site’s proximity to campus.  They were also concerned with the overall height and density in context with the neighborhood.

In a letter on behalf of the University Avenue/Rice Lane Neighborhood Association, neighbors stated their “opposition,” noting that “the City took several years to complete the ‘Policy Development’ and ‘Policy Implementation’ phases for the B Street Visioning Process.”  It was a lengthy process with extensive community outreach.

They argue that “these proposed amendments and waivers” “must be denied because they fail to meet the criteria established by the Core Area Specific Plan” and “there have been no changed circumstances since 2007 to support city staff recommendations.”

Jim Kidd said that, under a CC&R (Covenants, Conditions and Restrictions) he could restrict the people in the building to only owner occupants.  In other words, “who’s ever on the deed, he has to occupy the building or his condo unit.”

“The significance of that is that all present and future purchasers of the property have to be owner occupants, so it carries ad infinitum and there’s no exceptions to it,” Mr. Kidd told the council.

In the course of discussion, however, staff indicated that the city would have no ability to enforce the CC&R.  It was also noted that, in the West Central Park development, parents of a college student had paid the $700,000 and put the deed in their name, effectively short-circuiting the intent here, which was to ensure that no college students lived in the building.

This would ultimately lead the council to temporarily consider the age-restricted provision that would be enforceable at 62 or older.

Breilan Gowan spoke for the project opponents, as a 40-year resident and a member of the Central Park West Homeowners Association.  He said that the senior component has nothing to do with the suitability for this project, “whether it’s owner occupied or not really doesn’t go to the fundamental issues of what we’re talking about there.”

He said they support the Planning Commission’s unanimous ruling that this project be rejected.  He said, “It clearly violates all of the planning documents that arose out of the EIR, the 3rd and B visioning process.”  He noted that was an extensive outreach process in 2007, and therefore the council should respect that process, even as the council has turned over during that time.

He said city staff “would have you believe that this is not a 180 degree change with regards to these 11 parcels and they say this project is consistent with city policies and council goals which simply need clarification on the intent for development for this area.”

He argued that this is a much bigger deal.  He argued that there were differences between the draft EIR and what was finally implemented in the final EIR that specifically precluded what emerged in the Mission Residence project.

“The fundamental policy changes that city staff is proposing require full public input,” he said.  “If the vision of this city council is different then the 2007 City Council and you want to change direction, we have a process for that.  We did it in 2006 and 2007, and it resulted in public input and public buy in. Until then, we just beg you, don’t do rezoning piecemeal.”

The public, in general, was mixed in terms of their views of the project.  John Natsoulas said he was very excited about this project, saying, “This is a great use of space, aesthetically this is amazing.”

Gale Sosnick argued that, as the university expands, she can’t think of a better place for people without children to live.  She did say that the age restriction did not make any sense, as you want people who can work at the university and could walk there.

“I also am concerned when the rules of the game change,” she said.  “When Mr. Kidd started this project he was told he could have 16 units, and because a group of self-serving people who live in the University area want to preserve their particular turf the rules changed.  I think it’s immoral for someone to spend money on something they were promised and then pull the rug out from under them…”

Kari Fry lives on University between 3rd and 4th Streets, and she argued that the rental units cause far more impact than the owner occupancy units in terms of the number of cars and debris that end up in the alleyway.  “The idea of this project being owner-occupied required is a real critical thing and makes the concessions potentially outside the guidelines very worthwhile.”

Former Councilmember Stephen Souza supported the project, arguing he was part of the dialogue that went on in this “transition zone between our downtown and neighborhood.”  He argued that, prior to this process, there were four different zoning schemes for this area but “it really didn’t have any guidance.”

He argued that, without this process, it would have been a “hodgepodge” and that this brought consistency to the people who live in this area.

On the other hand, residents such as former Mayor Sue Greenwald opposed the project.  She argued that the process has been very unfair to the project opponents and that she just found out about this two days ago.

“The hall was filled with opponents to the last densification plan,” she said, noting the three-year process.  “Today what staff has done is recommend throwing this out without any warning to the neighborhoods.”  She added, “I’d just like to say this isn’t the way you (go about this).”  These massive changes have happened with “no warning whatsoever.”

Former Mayor Maynard Skinner argued that they knew the neighborhood was going to change.  “Our position was reasonable densification and scope, no apartments, we have enough of those,” he said.  He added that they had agreed on no four-story buildings.

“With that in mind, we participated in the visioning process and that seems to have worked quite well,” he said.

Marie Ogydziak and her husband David, who own property in the area, spoke out against the project.  In a letter they write, “Mr. Kidd knows that this is exactly what the neighborhood will fight most strongly.  He proposes a large project that initially had some attractive features.”

But she added, “It turns out that the project will not be seniors’ only” that “owner occupancy cannot be ensured” and that “it has half-level sunken parking and not true underground parking that is a full level down.”

Joe Krovoza would argue that it is hard to picture what it is going to be like on B Street.  He noted that we’re doubling the number of units, that there is no space in between them and there is no assurance from staff that if we allow these changes on this parcel that the nature of B St. isn’t going to be radically changed.

City Staff, notably Katherine Hess, argued that the changes are barely visible from the street and the impacts are barely different from Central Park West.

Here is the graphic they showed to make that point: 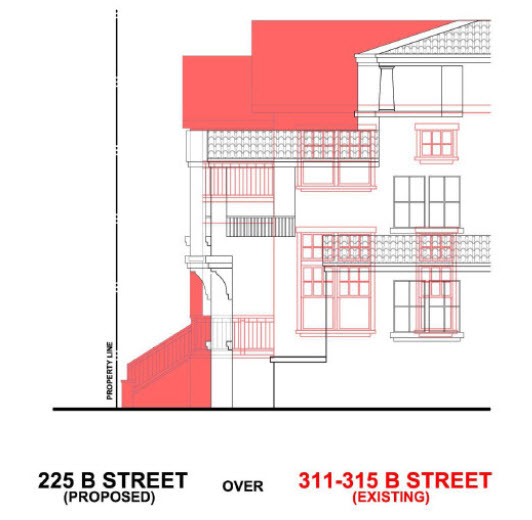 Rochelle Swanson argued that she likes the owner occupancy requirement because it would be a tragedy if it becomes a rental.  Mayor Pro Tem Dan Wolk noted that, while he recognizes that it impacts the neighbors, he thought it was a good project and he was glad to support it but did not want the age restriction.

Councilmember Swanson added that we need to look at overall needs of the whole community, as the key is not whether this is a good project, but really is looking at whether we will go piecemeal.  She argued it’s a consistent theme, and this is not outside of the theme.

Ultimately, Mayor Krovoza was willing to support this project with the stipulation added to the motion that this would not become precedent setting, but rather the changes would apply to this parcel only.

Brett Lee ended up being the only opposition to the changes.  “I think the design is very nice,” he said, noting it was something he could move into in 15 years or so.  “The fact that it’s not senior-only, I’m not sure why we would discard the current zoning without having a more community based process where, at least if we get the feedback and if we choose to go a different direction, we at least address them in a more comprehensive process.”

He said, on the one hand “I see it as a desirable place to live for the people who would live there, but I also feel that the process has not been respectful of all the work that has gone before it.”

As stated, the motion would pass 4-1, with Brett Lee being the opposing vote.