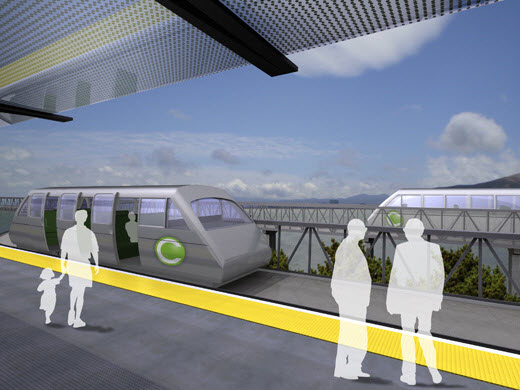 This week was marked by the announcement that Elon Musk (of PayPal, Tesla and SpaceX fame) announced that he is making significant plans to explore a new high speed transportation option that could result in a 30 to 45 minute trip between Los Angeles and San Francisco. As explained yesterday to Bloomberg Businessweek, the Hyperloop is a “a solar-powered, city-to-city elevated transit system that could take passengers and cars” between major cities in very short periods of time. The technology also “immediately poses a challenge to the status quo-in this case, California’s $70 billion high-speed train that has been knocked by Musk and others as too expensive, too slow, and too impractical.”

The Bloomberg article goes on to further explain that “the Hyperloop would avoid many of the land issues because it’s elevated. The tubes would, for the most part, follow I-5, the dreary but direct freeway between L.A. and San Francisco. Farmers would not have swaths of their land blocked by train tracks but could instead access their land between the columns. Musk figures the Hyperloop could be built for $6 billion with people-only pods, or $10 billion for the larger pods capable of holding people and cars. Altogether, his alternative would be four times as fast as California’s proposed train, at one-10th the cost. Tickets, Musk says, would be ‘much cheaper’ than a plane ride.”

And even though the Hyperloop is an exciting departure from the ideas of traditional transportation, Davis finds itself in the middle of a similar opportunity. A few weeks ago, the City Council approved the support of exploring a proposed test track for high speed testing of the CyberTran International’s Rapid Ultra Light Rail Transit (ULRT) system.  As a result of the action by the Council, staff are working with CyberTran to further explore transit technologies that would further achievement of transportation, climate action, and economic development goals.

CyberTran is not the only technology in the personal rapid transit technology space, but City staff finds the CyberTran technology to be more fully developed than many proposed ULRT systems. Additionally, the CyberTran technology was developed at Idaho National Lab, they are already partnered with another jurisdiction (Richmond) which means Davis does not need to pioneer the municipal relationship requirements, and they are working with UC Berkeley, Lawrence Livermore and Lawrence Berkeley National Labs, and other Bay Area transportation and research organizations.

To quickly explain the CyberTran ULRT technology, the proposed build-out of a system would be comprised of a grade separated electrified track used to convey extremely light rail cars and an awning covered with solar to generate power for the system. At an average of 15 to 18 feet above street level, it would effectively be out of the sight line and can be hidden behind (or above) buildings and in alleyways when in a downtown environment. The trackway would be comprised of precast concrete and steel track sections ranging up to 50 feet, held in place by spread footings on centers that can range from a few feet to 50 feet separation. You can see a video simulation of the technology on the CyberTran website (cybertran.com)

None of this is particularly revolutionary technology, but CyberTran gets its distinction from six primary areas:

1) Extremely light car weight of about 10,000 pounds carrying up to 20 passengers;

2) Use of “off track” (or sidelined) stations so as not to slow the progress of cars, thereby creating the potential for eliminating station stops between destinations;

3) Ability to traverse grades of up to 10% and span distances between columns that would allow tracks to move through and between buildings (both existing and new);

4) Very inexpensive as compared to traditional heavy or light rail technologies (about 15 to 20% the cost per mile of light rail and about 10 % of heavy rail/BART solutions);

5) Same vehicle and tracks can be used in both low and moderate speed environments and have been tested at speeds up to 65 miles an hour; and

6) Ability to be assembled and then removed and redeployed for current and future demand, which current fixed rail solutions are unable to accomplish.

In August 2012, the City of Davis partnered with the i-GATE Innovation Hub and CyberTran International to sponsor a ULRT Symposium with the purpose of providing an opportunity for community members, researchers, local elected officials, and State and federal representatives to learn about the technology. An outcome from the Symposium was to discuss the options to support a proposed pilot test track somewhere in the region to demonstrate the CyberTran technology in a speed environment of 65 to 120 miles per hour. The CyberTran technology has been tested virtually and at 1/32nd scale, but a full sized test track would be needed to demonstrate that the technology could become a local and regional solution using the same tracks and cars.

As a result, informal discussions have continued with an objective of pursuing this pilot test track for Rapid ULRT. Davis staff is meeting with CyberTran executives today in Davis to discuss funding options, including the potential for foreign investment. CyberTran representatives recently returned from China and Davis staff is also working on making these potential investment connections.

If a Rapid ULRT was demonstrated to be effective, then a CyberTran ULRT network could connect Yolo County communities to Amtrak, the capitol, Sacramento Metro International Airport, The Port of Sacramento and other transportation networks. And as I mentioned earlier, this technology has already been adopted in Richmond (through the General Plan) as the preferred linkage between BART and the new 2nd Campus for Lawrence Berkeley Lab and UC Berkeley.

So, imagine for a minute if Elon were able to make the Hyperloop a reality for high-speed intercity transport. The Hyperloop would be great to go from Sacramento to San Francisco in 10 minutes, but what happens when you get to either side? What if ULRT connected the Hyperloop terminal, to SMF, to UCD, to Amtrak, to…? And what if in the nearer future we could use ULRT to connect Davis Amtrak to UCD, to West Village, to Sutter Davis, to North Davis, to East Davis, to the 2nd Street Innovation center, to South Davis/Interland, to…? What if getting downtown was a simple ride on a small car train that went directly from six or seven stations around Davis to downtown. Or what if it connected Amtrak to Woodland, or West Sac, or Downtown Sac? I think you get the idea.

And with cheap, flexible track alignment, they could be deployed in the areas of most need and then rearranged as we grow, change or need connections to the centers of greatest need. Why can’t we dream about the many possibilities and explore the options for a high speed test track? If Elon can make the Hyperloop a reality (which does remain to be seen, but he has a good track record), why can’t we work hard to make ULRT or some similar technology as that of CyberTran a reality in Davis? Richmond is already leading the way, so why shouldn’t we work to explore these options as well?

Have ideas, thoughts, or opinions you want to share with me or the City? My email is rwhite@cityofdavis.org.

Share:
Previous : Sunday Commentary: No Justice For Trayvon
Next : Infographic: History of Reduction in Project Costs