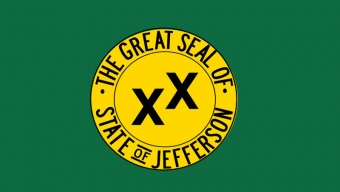 When the State of Virginia seceded from the union just prior to the Civil War, the northwestern counties of the state disagreed and felt that the sitting Virginia Government had acted illegally in seceding from the Union.

West Virginia became a state on June 20, 1863, in the midst of the Civil War. West Virginia is the only state in the Union to have acquired its sovereignty by proclamation of the President of the United States. Statehood was proclaimed by President Abraham Lincoln.

And while issues of slavery and secession largely played a role in the ultimate split, the history of West Virginia suggests that ultimately this was a mistake.  West Virginia, despite its abundant natural resources – particularly coal – remains today second only to Mississippi as the poorest state in the nation, while Virginia is the seventh wealthiest.

In early September, the County of Siskiyou voted to secede from California and this week, Modoc County followed suit.

Proponents of the movement argue that Siskiyou should form a new state, Jefferson, with other counties in Northern California and Southern Oregon that share similar interests.

Siskiyou County Supervisor Marcia Armstrong on August 15 wrote, “This ‘State of Jefferson’ would be formed to represent the needs of its people. It would protect their rights and liberties, as well as the public health and safety of its people. In addition, it is envisioned that the state would bring new opportunities. The Resolution anticipates that other rural California counties may also desire to be included within the new state.”

No one knows how far this proposal will go – after all, the movement is nothing new, there have been about 45 proposals for secession since California became a state.

As Supervisor Armstrong noted, “It is fully recognized that a Board of Supervisors has no power or authority to unilaterally carve the county out of the state. That would require approval by the people, with concurrence by the California Legislature and the U.S. Congress.”

She not only recognized that this was a huge task, but questioned the fiscal wisdom of the creation of a largely rural state.

She argued, “It is a fact that we have little input into decisions affecting us. We have no clout in how state resources are allocated to meet our needs and very little to say about the myriad regulations and fees under which we are struggling.”

This week Modoc County voted to join them.  Board Chairman Geri Byrne said a measure to join the push to form a state of Jefferson was approved by a vote of 4-0, with one supervisor absent.

“I put the measure on the agenda because I heard from a number of people in my district that wanted to do such,” Supervisor Byrne said in an interview with the Redding Record Searchlight. “We’re not saying we’re seceding today, we’re saying let’s look into it.”

About a dozen spoke in favor of the measure with only two raising objections, the paper reported.

Mark Baird, a spokesperson for the Jefferson Declaration Committee, said, as reported by the paper, “The group hopes to have a dozen counties commit their support before asking California legislators to allow the formation of the new state.”

“California is essentially ungovernable in its present size,” Mr. Baird said. “We lack the representation to address the problems that affect the north state.”

“We’re looking for 12 counties, though we can certainly do it with less,” he said.

He argued that if all goes according to plan the new state’s economy could be 15 percent larger than that of New Mexico.

“We are delighted to have Modoc County join Siskiyou in seeking to establish the formation of a new state,” stated neighboring Siskiyou County Supervisor Marcia Armstrong. “Modoc County has validated our belief that the current state of California is ungovernable and its policies are unrepresentative of the needs and values of Northern California communities.”

One can certainly understand that a small rural county would feel that they have little say in the state government.  But I talked to a few folks and most of them believe that each of these counties gets far more from the state in terms of services than they send to the state.

The viability of small rural economies that lack clear industry is certainly in question.

And they need to learn the lesson of West Virginia because West Virginia originally had very good reasons to secede from Virginia – secession and slavery.  But in the end, West Virginia has not been a success story.  Some of the poorest residents of this nation reside there and, as we mentioned earlier, only Mississippi is poorer than West Virginia.

In the meantime, Virginia has thrived as one of the wealthier states, with booming urban and suburban areas.

West Virginia had one advantage that Jefferson would not have, and that is the huge natural resource of coal.  And yet they have struggled despite this.

Bottom line, there is no way that either the California legislature or the US Congress would allow this split to occur.  So this is all academic, but the bottom line for discussion should be to be careful what you ask for.  You might get it.

Share:
Previous : Does Davis Provide for Successful Aging of Seniors?
Next : Another Stunning Murder in Davis

4 thoughts on “My View: Secession is a Bad Idea for Northern Counties”