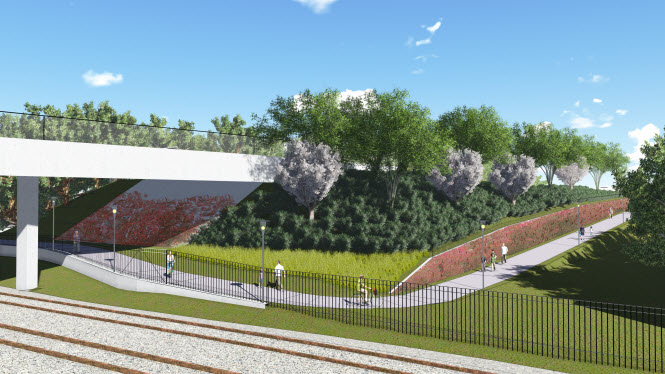 My story begins almost three years ago after I decided to downsize and bought a house in Old East Davis within direct line of sight of the east-west railroad line. I gave a lot of thought to cost, location, walkability, general neighborhood mix, and how I would adjust to the noise from the trains.

What I did not give any thought to was the safely, or ability to get out of my essentially cul-de-sac street should I need to evacuate rapidly. From what I have heard, it does not seem that many of us look into this issue prior to moving in. It seems that we just make the assumption that someone will have looked into the safety issues prior to approving or building the project. Or we simply don’t consider it at all.

Shortly after I moved into my cozy little bungalow, I discovered that there was a controversy brewing in my new neighborhood. The issue was the proposed fence along the railroad track purportedly with the intent of improving safety along the tracks in the aftermath of several train related deaths.

As with all well intentioned proposals, there are likely some unintended consequences. In an attempt to further understand what implications this fence might have for the residents of both my neighborhood and the “across the tracks” neighborhood of Olive Drive, I walked the Olive Drive side of the proposed route of the fence with a local expert on the railroads, my partner, and two city council members, Rochelle Swanson and Joe Krovoza.

What we found was sobering to me. Olive Dr., for those not familiar, has two potential automobile entrances, one off the west- bound freeway, and one heading east along Olive Dr. from the Richards Boulevard intersection.

There is however, only one automobile route out. That is to head west on Olive Dr. to this intersection from which it is possible to exit in three directions,  north through the Richards underpass into downtown, straight ahead, or south on  Richards. This intersection is frequently backed up in both directions.

So the impact of the “safety” fence is actually to block any reasonable hope of exiting the community on foot to the north should there be a need for community evacuation, leaving only exit on foot to the south without encountering cars trying to exit, or to the west with the potential danger to those on foot from those trying to exit by car.

The second neighborhood which makes up the title of this piece is San Bruno, California.  San Bruno is a suburban community in northern California. In 2010, a there was an explosion of a major gas pipe owned by PG&E. This blast killed eight, injured many others, destroyed between 40 and 55 homes entirely and caused extensive damage to many more. I, like many others, saw the aerial photos of the aftermath of this disaster.

I was particularly struck by one view which showed the gas line explosion as centering in the intersection of two major streets in the neighborhood. In the aftermath of this event along with the destruction of many lives is the ongoing financial cost. As reported in the San Jose Mercury News in September of this year, PG&E has just settled with 449 victims of this explosion for a total of $565 million dollars.  Now I tend to be someone who tends to focus on lives and rarely think about the potential economic implications up front.

However, I could not help but note by what order of magnitude this number dwarfed some of the other numbers in the 2-3 million range that have been debated back and forth when thinking about the potential liabilities or benefits of various aspects of this project. True, it is numerically low risk that such an event would repeat, however, the risk is not zero, and it has an extremely high potential cost should such an event occur.

The third neighborhood in my triad is, of course, The Cannery. For a long time, I didn’t make a direct connection. But when I did, I became increasingly concerned about the safety of this community as presently configured.

The potential problem as I see it is that the community is designed as a giant cul de sac with an intended population of 1,500.  This community is specifically being designed and advertised as friendly to the elderly, young families, and those with limited mobility.

There are two entrance/exits amenable to automobile passage located within a few yards of each other leading onto Covell Boulevard. There is one narrow entrance for emergency vehicles, only, on the east side of the project and per the ever sharp eyed Don Shor, a space for a service road running the length of the western side parallel to the north south railroad line.

So my mind connected the two, San Bruno, and the Cannery. I imagined the outcome of a similar explosion occurring near the southeast corner of this project with fire rapidly spreading and the potential for the only automobile accessible exit routes, located side by side having been blocked by the blast.

So here is my dilemma. I do not know whether or not this location or design have been thoroughly vetted for safety. I do know that answers to issues that I had raised before were either not to be found in the EIR nor known to the CC members who will be making the final decision.

One concern was addressed by a local expert in the railroads. It may well be that there is no concern here and that an adequate evacuation plan is in place and I am just unaware of it.  It may be that there are no foreseeable potential man made risks of this magnitude  associated with this project. However, until this morning I was uncertain that this concern was even being taken seriously. Enter my own personal Sydney Carton in the form of Brett Lee.

Councilmember Lee to his credit, reached out to me, took the time to listen to the background and my specific concerns, was willing to admit that he did not know the answers to several questions I asked, and said that he would address them and get back to me.

This is all I could ask for with regard to the Cannery project which is very far along in its development.  However, I do not think that this is all that we can or should ask for as members of the community going forward with future projects. If disaster planning including need for potential evacuation is not part of the initial planning for all future projects, it certainly should be.

As members of the existing community, we have a responsibility to those for whom we are providing new homes to ensure that their neighborhoods will be as safe as can reasonably be designed before we even start considering amenities.