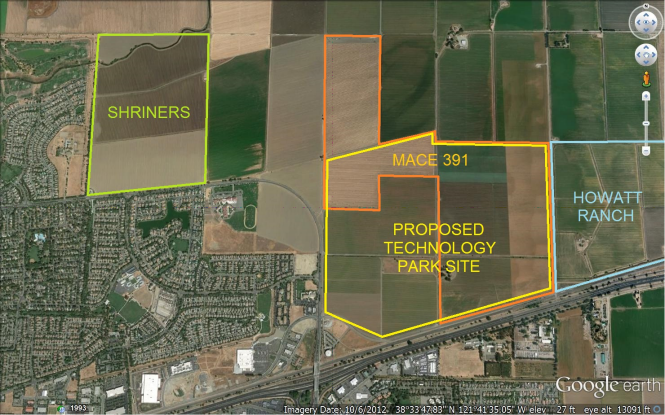 The meeting was packed with folks, many of whom lined up to speak on the issue of the Mace 391/Leland Ranch Ag Easement.  A large number of them came out in support of moving forward with the easement, though members of the business and tech community offered powerful counter arguments.

In the end, the handwriting was on the wall and despite people providing strong questions about the actual impact on the closing efficiency of the city and Yolo Land Trust, the council was simply unwilling to take that chance and voted 5-0 for option one – finalizing the NRCS (Natural Resources Conservation Service) conservation easement.

The option would allow for 27 acres of the parcel to be retained as a community farm.

“This is exactly the type of presentation that I wish we had a year ago,” Councilmember Brett Lee commented.  “The June meeting was not a good meeting for a variety of reasons.  I think the key one is that it felt very rushed.  The information was flipped: we can go with the plan, but we don’t have any time to talk about it because we have to decide by Thursday.”

“That (process) didn’t do justice to our responsibility,” he said, either their fiscal responsibility or their responsibility to make good decisions for the community.  He felt that the presentation that staff gave on Tuesday was what the council really needed.

For Rochelle Swanson this was an issue tied to the city’s fiscal health.  “It’s heart breaking to tell 85 employees” that there had to be budget cuts as the council did when they made the decision earlier in the evening to impose the Last, Best, and Final offer on the Davis City Employees Association.  “To see a gentleman with tears in his eyes because he thinks he’s going to lose his house over this,” she said.  “That’s hard.  We do have a fiscal responsibility and I think turning this into a black and white, us versus them – no matter which side you’re on is just wrong.”

“That’s not the Davis way, that’s not the way it’s supposed to be,” she added.  “We have to look at these things at a wholistic level.  We don’t have anything else but revenue to get us out.”

In the end it was the letter from NCRS that proved pivotal.

A letter dated November 12, 2013, from the US Department of Agriculture’s State Conservationist, Carlos Suarez, addressed to Mayor Joe Krovoza, indicates that the consequences would be serious and grave.

The letter notes that the NRCS has agreed to provide $1.125 million in grant funding to assist the Yolo Land Trust to purchase the conservation easement, and that the deadline to complete this transaction has been extended twice.

“If the City chooses to reconsider the merits of the Mace Curve project, it’s important to understand the potential consequences of returning the FRPP [Farm and Ranch Lands Protection Program] grant funding,” Mr. Suarez writes. Should the City decide to no longer pursue the easement, NRCS would be required to return the $1.125 million back to the U.S. Treasury.”

“Unfortunately, this funding cannot be used for other NRCS conservation projects, nor can the funding be used for a modified conservation easement proposal under consideration now or in the future by the City or Yolo Land Trust,” he notes.

He continued, “If the City decides to not protect Mace Curve/Leland Ranch with a conservation easement at this time and FRPP funds are returned, both the City and the Yolo Land Trust will continue to be eligible to apply for future FRPP grants – although each entity’s closing efficiency will be affected based on the guidelines set forth in FRPP policy.”

The letter was backed up on Tuesday by comments from Michele Clark of the Yolo Land Trust and Lana Kieger of NRCS.

Michele Clark noted that the city of Davis and the Yolo Land Trust have over the years closed 17 conservation easements for nearly 3000 acres of land.

Ms. Clark explained that the NRCS Grant program “is a highly highly competitive program.  Part of the reason we are successful in obtaining those funds is because the degree of trust that NRCS has with both the Yolo Land Trust and the city of Davis, that we can get the projects done.”

She added, “The allocation in 2011 (for Leland Ranch) was about 30% of the allocation for the whole state of California.”

These facts and figures led Matt Williams during public comment to compare the closing efficiency to a batting average.  He noted that Ms. Clark set the number of Davis projects at 17 and that Davis was less than the majority.

Based on that, he noted that their batting average might fall from 100% to 97% which he felt would still be a strong closing efficiency.

Ms. Kieger of the NRCS said that she could specifically address how this might impact the YLT since it would be on the next application, and it would be based on overall rank.  “If there were 15 applications and this drops them one point below where they were, it could make a difference or it could make no difference,” she said.  “It is in comparison to the others that bid.”

While some would argue that the actual impact on the YLT was uncertain and perhaps remote, it was clearly a risk that even the most ardent supporters of economic development on council were not willing to take.

“The difficulty is that… this council has already made commitments back to 2010 to walk down the path of committing to conserving this property,” he continued, “and as I said the last council, the fact that our decision in rejecting that grant or rejecting this easement… could affect the very lifeblood of the Yolo Land Trust (or) permanently hurt the Yolo Land Trust is something that I just cannot do.”

Lucas Frerichs made the motion to support Option 1.  The motion was seconded by Joe Krovoza.

Councilmember Frerichs argued that this was not an environmental versus business issue, “I am very much in favor of economic development in this community.”

He lamented the fact that he has consistently called for much more public outreach in this process and we did not do that – at least not in June.

Councilmember Frerichs noted that he does support one of the sites that the Innovation Parks Task Force analyzed and noted that, just to the west of the Mace 391 and to the east of the curve lie two parcels, one the Bruner Trust and the Ramos-Oates tract.  These would both require Measure J/Measure R votes and he also noted that Mace 391 would provide a nice ag buffer to those sites.

Mayor Joe Krovoza, who was the only member of council to even oppose having this discussion, noted in his comments that he also supports the Innovation Parks Task Force Report.

The council’s decision was ultimately 5-0 to go forward with the agricultural easement, and those supporters of a business park could take solace in the general support from the community for a business park option – at least in the abstract.