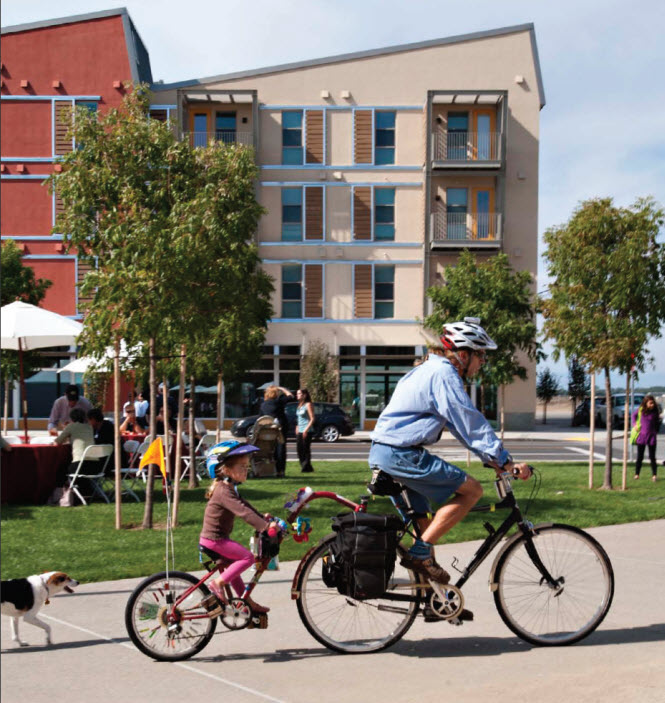 The University of California at Davis, West Village, the nation’s largest planned zero net energy community, racks up an impressive list of achievements in its initial year of review. The first formal analysis of West Village shows that, even in its initial phases, it is well on the way to the ultimate goal of operating as a ZNE community.

The report released today from UC Davis, and its partner West Village Community Partnership LLC, outlines major milestones including West Village producing 87 percent of the energy it consumed in a one-year period — well in advance of the project’s full completion.

“West Village is what a sustainable energy future looks like for California and the rest of the world,” said Ralph Cavanagh, Energy Program co-director for the Natural Resources Defense Council. “Its commitment to comprehensive evaluations like this one is an important part of the good example that the community is setting for the rest of us.” Cavanagh, a renowned authority on energy policy and conservation, is also vice chairman of California Clean Energy Fund and member of the National Commission on Energy Policy.

WVCP engaged energy consulting firm Davis Energy Group to evaluate the project’s energy consumption and production over a 12-month period from March 2012 to February 2013. The report also highlights the many “firsts” West Village can claim including Sacramento City College Davis Center, the first community college center built on a University of California campus.

The prototype University Hub, a new concept aimed at fostering better collaboration among research groups and accelerating the transfer of university inventions from the laboratory to the marketplace, also calls West Village home. The Energy and Transportation Hub located in the community now plays host to several research centers and creates a “living laboratory” to develop energy and transportation
technologies.

“This report is a summary of tremendous accomplishments and provides a roadmap to enhanced sustainability,” said Sid England, assistant vice chancellor for environmental stewardship and sustainability. “West Village is a grand experiment with ambitious goals and we look forward to working closely with our partners to reach the pinnacle of energy efficiency.”

While West Village continues to garner international recognition, most recently with the 2013 Urban Land Institute Global Award of Excellence, several other research investigations are under way at the site. The Honda House, a high-tech sustainable home filled with a smart-grid Honda Energy Management System, will demonstrate an innovative approach to meeting the state’s goal of requiring all new residential construction to be ZNE by 2020.

The second annual report, to be published in winter 2015, will highlight new and related advances including the opening of the Renewable Energy Anaerobic Digester offsite at the former UC Davis
landfill, and the beginning of WVCP’s energy use and efficiency educational program for residents of West Village.

West Village is a 200-acre community designed to house 3,000 UC Davis students and 500 staff and faculty in apartments and single-family homes. It officially opened in September 2011 with the first student apartment. With the recent opening of the Solstice Apartments in September 2013, West Village is currently home to 1,980 residents living in 663 units. Construction of single-family homes is expected to start in 2014, with the first models opening in the spring.

UC Davis West Village is a public-private partnership between UC Davis and West Village Community Partnership, a joint venture of Carmel Partners from San Francisco and Urban Villages from Denver. The West Village Energy Initiative is a team comprised of UC Davis and WVCP affiliates created to carry out principles and plans adopted for the project.

UC Davis has long served as a proving ground for innovations in environmental sustainability. Sierra Magazine named UC Davis the nation’s #1 Cool School in its 2012-13 ranking of the country’s greenest colleges. In 2011, UC Davis West Village opened its doors with a goal of becoming the nation’s largest zero net energy community. Aggressive recycling, composting and reuse efforts prevented nearly 75 percent of campus waste from entering landfills in 2012. Through its Climate Action Plan, the campus has reduced greenhouse gas emissions below 2000 levels and expects to return to 1990 levels by 2020. The campus also boasts more than 42 miles of bike paths and more than 20,000 bike racks, earning it platinum Bicycle Friendly University and Bicycle Friendly Business awards in 2013 from the League of American Bicyclists.

Share:
Previous : The California Legislators Who Ate At Oil Industry Table Before Fracking Vote
Next : Vanguard Commentary: No Reportable Action Means We Will Never Know