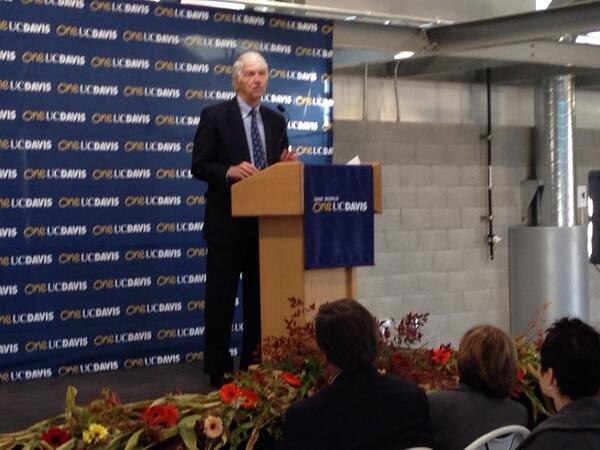 Charged with linking transformative research with partnerships to address challenges and opportunities at the intersection of food, agriculture and health, acclaimed plant biologist Roger Beachy Thursday was named founding director of the new World Food Center at the University of California, Davis.

Mr. Beachy, internationally known for his scientific leadership and groundbreaking research related to disease-resistance in crops, will assume the new position Jan. 1.

“Roger Beachy brings the perfect blend of scientific acumen, experience and vision that are critical for launching the new World Food Center on its proper trajectory,” said UC Davis Chancellor Katehi. “We are delighted to have him join us and quite excited about what he and the center’s future partners will accomplish as they work together to achieve global food security for the next generations.”
The World Food Center, announced by Katehi in March during the international Climate-Smart Agriculture Conference at UC Davis, is intended to increase the economic benefit from campus research;
influence national and international policy; and convene teams of scientists and innovators from industry, academia, government and nongovernmental organizations to tackle food-related challenges in California and around the world.

“Based on the history of UC Davis and its role in helping make California agriculture the envy of the world, I believe the World Food Center can make a transformative difference positively influencing food production and consumption here and around the world,” said Karen Ross, secretary of the California Department of Food and Agriculture. “UC Davis’ extensive experience in this area shows what’s possible through discoveries and innovations applied in a real-world setting.”

“As a regent and someone who has spent his life in the frozen food business, I have been excited about Chancellor Katehi’s vision for the World Food Center,” Ruiz said. “Now, under Roger Beachy’s leadership, the center truly has the potential to help keep California in the forefront of providing products and technology that help feed and nourish the world, offering tremendous economic value to our state.”

“UC Davis is one of the very few universities in the world equipped to address global food challenges in a comprehensive manner,” Mr. Beachy said.

“Agriculture must provide food for an anticipated global population greater than 9 billion people by the year 2050, including roughly 12 million more people right here in California,” he said. “To do that —
while safeguarding the food supply and the environment, and energizing the economy — we must draw on the expertise of agricultural scientists, veterinary- and human-health professionals, nutritionists, ecologists, engineers, economists and business management experts — all of whom you will find right here on the Davis campus.”

He noted that UC Davis has the added advantage of being geographically located in California’s Central Valley — the nation’s most productive agricultural region, which drives the state’s $43.5 billion annual farm economy.

“We will be looking to such industry leaders as we identify key partners and develop a real team approach for the World Food Center,” Mr. Beachy said. He noted that the center’s first year would be devoted to developing such partnerships and focusing on the challenges and opportunities that the new center should address first.

Roger Beachy, an elected member of the National Academy of Sciences and the 2001 recipient of the prestigious Wolf Prize in Agriculture, currently serves as the founding executive director and CEO of the
Global Institute for Food Security in Saskatchewan, Canada.

He was appointed in 2009 by President Obama as the first director of the U.S. Department of Agriculture’s National Institute of Food and Agriculture, where he served until 2011.

From 1999 to 2009, Beachy was the founding president and director of the Donald Danforth Plant Science Center, a not-for-profit, plant science research center near St. Louis, Mo.

He headed the plant biology division at The Scripps Research Institute from 1991 to 1998, where he was a professor and the Scripps Family Chair in Cell Biology, as well as co-director of the institute’s International Laboratory for Tropical Agricultural Biotechnology.

From 1979 to 1991, he was a biology faculty member at Washington University in St. Louis, and served as director of the university’s Center for Plant Science and Biotechnology.

Beachy holds a doctoral degree in plant pathology from Michigan State University, and was an adjunct professor from 1992 to 2005 at Peking University, Beijing, China, and from 1997 to 1999 at UC Riverside.