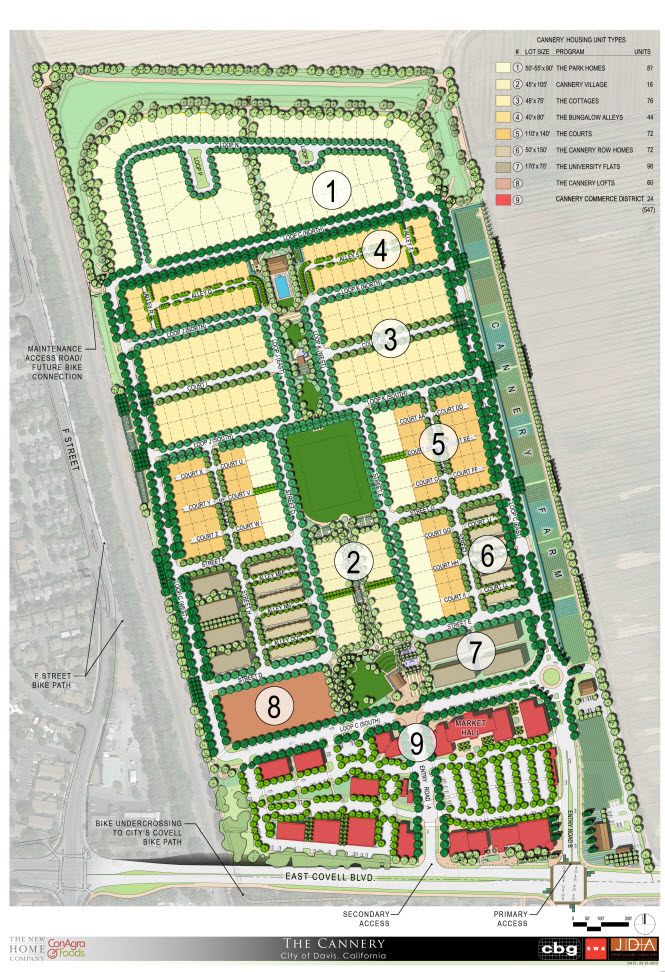 After a decade of community input, it’s time to move forward: The Cannery project has been  in the planning process for almost a decade, with an unprecedented amount of public input.  The abandoned Hunt-Wesson Cannery site had been dormant for years and needed a new use. Residential housing had encroached on what used to be a factory on the edge of town.  The site was no longer viable for a large commercial development due to having so much nearby residential and inadequate highway access. The City business park viability studies determined that the site was “infeasible” for a tech park.  The Business and Economic Development Commission (BEDC) supported a mixed-use for the site.  Nearby neighborhoods opposed a large commercial park use,  but supported the mixed-use concept.

The Housing Element Steering Committee (HESC) strongly supported this site for housing for many reasons including: 1) it’s an infill site within the city limits, does not need a Measure J vote, and promotes compact urban design; 2) it’s close proximity to shopping, schools, and parks, and 3) it provides an opportunity  for a mix of housing types.  The HESC did not want development of the Cannery site tied to the Covell Village which is on county land outside the City boundaries and therefore subject to Measure J.

Unfortunately, the first redevelopment proposal of the site was abandoned by Lewis Homes in 2009 due to last minute controversy about a commercial use after years of planning a mixed-use.  All of the work and input by the community was almost lost.  Fortunately, a second opportunity arose in 2010 when Con Agra picked up where the previous applicant left off.  The project design improved with attractive new features like an Urban Farm working in partnership with the Center for Land Based Learning, bio swales, native drought tolerant landscaping, sustainability features such as solar panels, high performance appliances and lighting, an improved park layout, and, most importantly, incorporation of Universal Design in the houses to create a multi-generational project that allows “aging in place” – which the community has consistently asked for.

The Cannery houses would have Eskaton’s New Home Seal of approval for “Livable Space” for “aging in place.”  It would be the first project of this scale in the nation, with cutting-edge planning for Davis residents of all ages.  The Senior Commission and the Social Services Commission have strongly supported the Cannery proposal due to its innovative overall design, as well as its Universal Design features. Not only does this flexible home style work for all ages – and invite young families back to live in Davis to help provide children for our declining elementary school population – but it is inclusive so that everyone from children, to workforce, to the retired can live there.

One of the most important considerations is that Cannery would help provide the balance of our SACOG RHNA fair share housing requirements for the current 8 year cycle. Cannery’s  547 units would alleviate pressure for the City to annex agricultural land to provide housing , such as the Covell Village site which proposed 1,864 units in 2005 but was voted down by the public (Measure X). Since the Cannery site is within the city boundaries (unlike the Covell Village site) we get the added benefit of the City keeping more of the property taxes to help address our budgetary problems.

Additional opposition by the Covell Village developers has been stirred up by their hired representative Lydia Delis-Schlosser, who is an active member of the local bike organizations and was hired by the Covell Village developers to organize the Choices for Healthy Aging (CHA) group. The CHA group has continued to demand that almost half of the project be small single story units targeting senior needs.  However, the whole point of the project is to be multi-generational and inclusive of all ages, not to be focused on being a retirement community.  Recently, the Planning Commission rejected the CHA proposal and supported the Cannery’s multi-generational, aging-in-place housing plan proposal. Even though the project has an extremely diverse mix of housing, Cannery has also agreed to give local builders access to 30 lots which can be custom built. 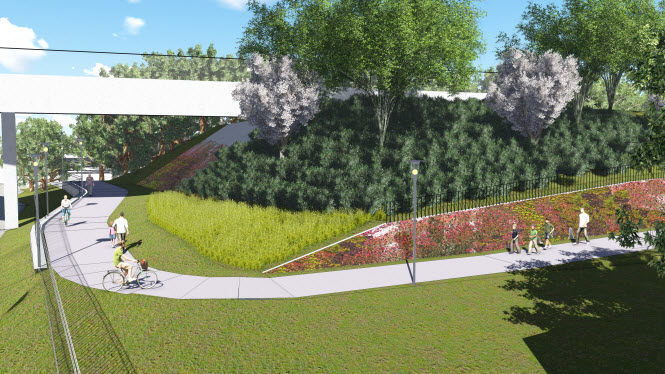 The Covell Village developer’s representative has persisted in trying to motivate the local bike groups and others to support all of the Covell Village developers’ unreasonable demands for excessive bike paths through the Covell Village site. So far the local bike groups have expressed their preference for a bike path along the edge of Cranbrook Court Apartments to the H Street tunnel. However, physical challenges and the persistent easement denial by the Covell Village developer’s remain significant problems.  A more viable grade-separated bike crossing alternative is the proposed Option 1 bike path which would go under the Covell Overpass along the east side of the railroad tracks and reconnect with the existing off-street bike path on the Covell Overpass.  Of all the grade-separated options being considered, Option 1 would be the shortest distance to go east or west by bike.  But, apparently influenced by Delis-Schlosser, the  Bike Advisory Commission made a late request for yet a second multimillion dollar grade-separated crossing “to the east” of the Cannery. There are major feasibility issues due to large amounts of new underground utility infrastructure at L Street as well as existing buildings.  In addition, a bike tunnel to vacant agricultural land in the county is an obvious “camel’s nose under the tent” regarding the development of the Covell Village site.

The Cannery project has been through extensive review and Commission hearings.  Thanks to the enormous amount of input from our community it has evolved to become a beautiful project with many unique features.  Most importantly, it fulfills our SACOG fair share requirements.  NOW is the time for the Cannery to move forward. There has never been a project as custom designed for Davis, as the Cannery.

60 thoughts on “The Cannery, a Great Project for Davis”