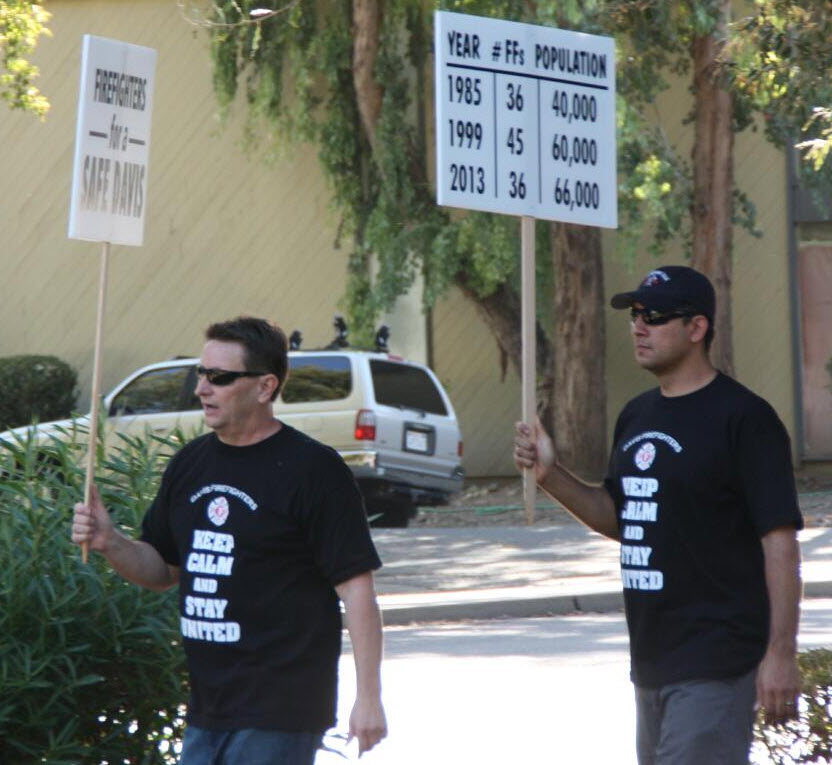 By next week at this time, it is possible that the Davis firefighters will have a new contract imposed on them.  For the last eighteen months, the city of Davis has been battling its firefighters’ union trying to get them to take the same concessions that now all other city employees have taken, despite the fact that the bargaining unit is the best paid group of rank and file, non-management employees in the city.

Ironically, the city might be selling high, as hundreds of potential firefighters were willing to stand out in the cold for hours, just for a chance to apply.

On Tuesday, the city opened up recruitment for the Firefighter I position – the entry level position.  Applications were only taken on Tuesday starting at 8:30 a.m. at the Veteran’s Memorial Center.

The first 125 applicants will be given a written test immediately following the acceptance of their application.  By noon on Monday, already 15-20 people had lined up for the opening of the position, with some lining up as early as 5 a.m. on Monday.

The city reports about 300 individuals came looking for a spot.

At present, the Firefighter I position earns roughly $93,000 in salary and nearly the same in benefits.  So for an entry level position, the typical firefighter will make over $175,000 in total compensation – a figure that the council has been battling with the union to reduce.

If the union wants to argue that the city could not hire qualified firefighters at a reduced compensation, the attendance figures earlier this week suggests otherwise.

Certainly UC Davis has no problem attracting qualified firefighters at more than $20,000 less per year and $47,000 less for management employees.

As noted in last week’s debate over the shared management agreement, one of the chief hurdles to a full merger is the compensation discrepancy between university firefighters and city of Davis Firefighters.  It was the compensation issue that ultimately undid the 2010 merger agreement.

UC Davis Vice Chancellor John Meyer noted, “The culture of the rank and file firefighters is not rife for a full merger at this time. I don’t think you could get both labor groups to agree.”

At the same time that the fire department is flush with applicants, and probably would be at UC Davis compensation levels, the city of Davis Police Department is struggling to fill positions that have been open for some time.

The Davis Police Officers’ Association was one of the employee groups that agreed to the concessions from the city back in December 2012.  When the firefighters were taking a huge pay increase in the mid-2000s decade, the police officers took a much more modest 18% increase.

This is the base salary.  It does not include the tens of thousands of hours of their overtime, their pensions, their health care, their retirement health care, or their cafeteria cash outs.

Police officials are increasingly concerned about a rising wave of crime, punctuated earlier this year with a rash of burglaries and assaults and even some rare murders in the city.

The police are fearful that they lack the resources now to combat that crime, which is in part why they came en masse to city council back in September to counter pressure from the firefighters’ union.

The numbers on Tuesday demonstrate that the city would remain well protected, even at wages and benefits substantially lower than those that current employees have become accustomed to seeing.

The firefighters have been opposing all changes, bringing in a number of different tactics – most recently a petition against the shared management agreement between the city and university.  Union President Bobby Weist claimed last week to have 2000 signatures in hand, though the city has never received that petition and witnesses reported to the Vanguard that the firefighters were encouraging non-residents to sign it.

There were also two separate letters from public officials opposing the agreement.  However, the council approved it 3-2 last week.

The council published the results of fact-finding, and is expected to unanimously approve an imposition of the last, best and final offer.  If anything, the numbers on Tuesday demonstrated that perhaps the city is not asking for enough in concessions and that we could get very qualified firefighters at a much lower cost to the city.

As the city plunges deeper into the red in the next five years, this issue bears revisiting.