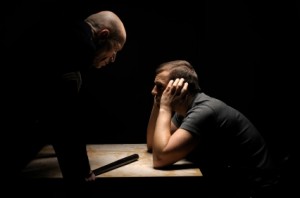 The Need for Additional Protections Against Wrongful Convictions Illustrated – It was interesting to read an op-ed in the local Davis paper that reprinted an editorial from the Memphis Commercial Appeal, depicting the case of TJ Johnson who has become only the latest in a series of cases with false murder confessions.

According to the account, he admitted to police that he drove a getaway car in a murder and robbery on October 4.  Unlike many, however, he only had to spend 64 days in jail.

Writes the Memphis paper, this latest false confession “should give pause to opponents of mandatory videotaping of police interrogations.”

They write, “We have only Johnson’s account of the interrogation, the police not having commented on it. But from his description, it had the earmarks of a method developed in the 1950s that permits interrogators who believe suspects are lying to obtain confessions by making false and misleading statements to them and promises that interrogators don’t intend to keep.”

The widely-employed Reid technique, described in detail by writer Douglas Starr in his Dec. 9 New Yorker article “The Interview,” has been called into question by criminal justice scholars because of the number of false confessions it has produced.

Most of law enforcement now uses what is called the Reid Method.

“The Reid Method,” as Phil Locke describes in a 2012 article, “is a psychologically structured interview and interrogation technique developed by, and taught by, John E. Reid & Associates.”

He writes, “The method starts with a ‘behavioral analysis interview (BAI).’  During this phase, the interrogator maintains a ‘friendly’ demeanor, but poses structured questions designed to provoke responses that can indicate guilt.”

“If the interrogator decides that the suspect is ‘guilty,’ the method then proceeds to the ‘interrogation’ phase, which is confrontational. There are nine separate steps to the interrogation phase, and they are psychologically designed to get the suspect to the point where he believes his ‘only way out’ is to confess,” Mr. Locke continues.

“As part of the interrogation phase, the suspect may be offered a promise of leniency if he confesses,” he wrote.

A 2010 New York Magazine article reports, “Critics say the Reid technique is a major source of the problem. What was once seen as the vanguard of criminal science, they argue, is nothing more than a psychological version of the third degree.”

Even beyond the Reid method, the courts have given police “carte blanche in the interrogation room for any tactics shy of physical abuse,” said Steven Drizin, a researcher at Northwestern Law School.

To counter this, 18 states require videotaping of interrogations in murder cases.

A few days ago, we reported on the West Memphis Three, which occurred in West Memphis, Arkansas, in 1993.  There one of the defendants confessed to the murder, but while we do not see the lengthy interrogation, even the videotape of the confession itself led investigators to disbelieve the confession.

The editorial notes that Tennessee in 2011 decided not to require videotaping as they “accepted the argument that the decision should be left up to law enforcement officials because taping can cause a guilty suspect to clam up.”

The paper notes, “But suspects who waive the ‘right to remain silent,’ believing they have nothing to hide and wind up confessing, are almost never acquitted by juries. And in 50 percent of exonerations resulting from DNA evidence, false confessions were obtained.”

Writes the Memphis paper, “It’s not difficult to see why police focused on Johnson. They had evidence that the driver in the Shelley case was nicknamed ‘T.J.’ Johnson had associated with gang members. A cell phone that belonged to one of the robbery victims had been found near his home. He and the co-defendants all once attended Wooddale High School in Memphis. And Johnson wasn’t in school when the crime occurred.”

“After lengthy questioning, he signed a statement confessing to the crime,” however, unlike in many other cases, “Johnson’s attorneys didn’t believe it. Their investigation, as well as more work by prosecutors and police, eventually resulted in a murder charge against alleged getaway car driver Thomas Bernard Moss, 17.”

The paper adds, “The story would seem to have had a good ending. It would be a lot better, of course, if the public could be assured that it’s not likely to happen again.”

Unfortunately, we don’t have to go all the way to Memphis to find examples of these injustices.  Many have occurred in our own backyard.  Radley Balko recently wrote about a dissent by Alex Kozinski, chief judge of the U.S. Court of Appeals for the 9th Circuit, from a decision not to rehear U.S. v. Olsen.

He wrote, “There is an epidemic of Brady violations abroad in the land. Only judges can put a stop to it.”

Writes Phil Locke, “Kozinski’s statement is interesting, because it is recognizing that there is nothing in the law that punishes (sanctions) prosecutors for this unethical behavior.  They are supposedly subject to sanction from their bar association, but guess what – this just about never happens.”

He also notes that there has been some meager legislative progress; for instance the Michael Morton Act will go into effect on Wednesday and “goes farther than ‘Brady’ in that it requires disclosure of all police reports and witness statements, regardless of whether the evidence is material to guilt or punishment.”

From the text of the act “If the court finds that a party has failed to comply with any of the provisions of this article, the court may order and compel such party to provide the required discovery or disclosure, grant a continuance, issue a protective order, take other appropriate action as necessary under the circumstances to accomplish the purposes of the required discovery or disclosure, or, and only if other remedial alternatives have been exhausted, prohibit the introduction of certain evidence, the calling of certain witnesses, or other relief necessary to assure justice. The court may not dismiss a charge under this subsection unless authorized or required to do so by other law.”

As we wrote on Saturday, the question is how do we protect the sanctity of the overwhelming majority of convictions while lowering the threshold for new trials based on DNA evidence, evidence of false confessions, recantations of witnesses, etc.?

This does not have to be rocket science, but the prosecutor in the West Memphis Three case shows why this is needed.  Prosecutor Scott Ellington indicated “that although he still considered the men guilty, the three would likely be acquitted if a new trial were held given the powerful legal counsel representing them now, the loss of evidence over time, and the change of heart among some of the witnesses.”

How can we get these cases out of the hands of individuals who have a stake in the case, and into the hands of some sort of wrongful convictions panel that can independently analyze cases to determine if the basis for conviction still remains?

Yes, we understand that having new trials twenty years later becomes problematic for the state, given the erosion of evidence and memory, but at the same time, these people spent years and years of their life in custody after it was clear to most reasonable people that they were the wrong men.  And this is not an isolated problem – many sit incarcerated for decades when it is clear there was something very wrong with their cases.

This year perhaps, we will work toward an answer.

Share:
Previous : Sunday Commentary: One Year Since ‘the Other Davis’… What’s Changed?
Next : Vanguard Analysis: Could Legal Challenge Undo Measure I?

17 thoughts on “Eye on the Courts: More Evidence That False Confessions Occur”