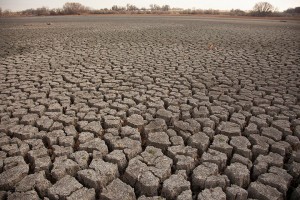 As part of that declaration, Yolo is eligible to receive up to $500,000 in emergency aid for farmers and other businesses impacted by the drought.

The news gets worse, as today, federal scientists predicted that the dry weather in California is expected to continue at least another three months, which would take us into April and out of the wet season.

“There will be a few precipitation events, but we’re looking at drier-than-normal conditions in February, March and April,” said Matthew Rosencrans, a meteorologist with the agency, which is based in College Park, Md. “Right now we are saying the odds do not indicate a Miracle March, which is not a good thing.”

On Friday, Governor Brown will declare a drought emergency, which will facilitate the transfer of water between regions in the state and raise awareness for conservation.

According to one report, California falls into the fourth of five drought categories, “extreme drought.”

The Vanguard yesterday received a question from a local resident, “With the drought now in full swing I am aware of no government indication that we should start REALLY conserving water.  What are the government plans if we continue this drought well into the summer.  Lakes and reservoirs at well below acceptable levels, should not we start enforcing water reduction now instead of waiting and hoping for rain.”

According to Dianna Jensen, the City’s Principal Engineer, staff is working on a report to council for the January 28, 2014, meeting.  She said, “The report will include what our current water conservation goals are, how we are impacted by the lack of rain, and what additional conservation efforts we might recommend. “

In the short term, the city of Davis is probably in better position than most other communities, with its lack of reliance on surface water and ample intermediate and deep water well reserves.

The city last year voted to join with the city of Woodland in constructing a surface water project.  The project is underway despite ongoing litigation about the water rates and a potential initiative.

Proponents of the project expressed concern about the ability of the city to meet future water discharge requirements with high concentrations of minerals in the drinking water ending up in the city’s outflow.

They also expressed concern about the aging infrastructure for the wells that may require an influx of millions to upgrade as well as the declining quality of several deep wells that have caused the wells to fail or have otherwise forced the city to take them off line.

One of the issues of interest is the need for conservation, while at the same time the need to meet the fixed costs of the surface water project.

Water consultants for Bartle Wells told the Davis City Council that the water rate calculations carried with it a 25% conservation assumption, but if the drought forces additional conservation efforts, the city may be forced to increase the water rates, which would trigger another Prop 218.

Hopefully, the city staff will be able to address these and other concerning scenarios, given the increasing severity of the drought.

88 thoughts on “Drought Emergency Declared, What It Might Mean For Davis”