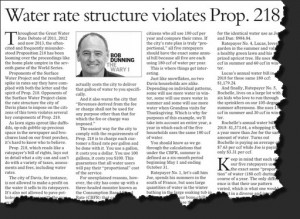 Reading longtime Davis Enterprise columnist Bob Dunning’s column on Judge Dan Maguire’s decision is quite interesting.  While the columnist is generally praising of the work product of Judge Maguire – and rightly so, Judge Maguire from what we have seen, has an extraordinary legal mind, and is thorough and meticulous in his rulings – the columnist fails to even acknowledge that the judge debunked his arguments.

Writes Mr. Dunning: “In a well-reasoned and intricately detailed decision that was a month in the making, Yolo County Superior Court Judge Dan Maguire ruled yesterday that the city of Davis’ new-and-steeper water rates that began last May do not violate the California constitution … while conceding that the new rates may well negatively impact a number of Davis residents, Maguire rightly concluded that that sad reality was not relevant to the case at hand …”

This is an interesting turn of events because on January 27, 2013, Bob Dunning in fact proclaimed: “City water rates violate Prop. 218.”

“The easiest way for the city to comply with the requirements of Prop. 218 is to charge each customer a fixed rate per gallon and be done with it,” he wrote.  “For unexplained reasons, however, the city has come up with a three-headed monster known as the Consumption Based Fixed Rate (CBFR) that calculates the majority of your next year’s bill based strictly on the water you used the previous summer.”

Concluded Bob Dunning, “The fact their bills vary so wildly for the same amount of water is proof positive Prop. 218’s requirement of ‘proportionality’ is violated by the CBFR rate structure. Dramatically so, in fact.”

He added with a measure of certainty, “If this thing ends up in court, as it no doubt will, the city won’t have enough attorneys to explain how it costs $1,373.64 to deliver 180 ccf to Rochelle but only $596.04 to deliver the exact same amount of water to Joe. But good luck trying.”

The argument that Bob Dunning puts forward here is included in the brief put forward by the Yolo Ratepayers.  As Michael Harrington and Jon Morse argued on page 9, paragraph 27 of their complaint: “The Loge Williams Rates do not comply with Proposition 218 and are unconstitutional and illegal in that, inter alia, they impose a fee or charge incidental to property ownership which exceeds the proportional cost of the services attributable to the parcel.”

Here they actually cited Bob Dunning’s January 27 column: “An example of one of the arguments favoring Plaintiffs was published on January 27, 2013 by local notable columnist Bob Dunning in the Davis Enterprise, a respected regional publication that researches and publishes stories at the forefront of local political and economic developments.”

They concluded: “This is but one example of the constitutional deficiencies suffered by this rate structure.”

Judge Maguire then proceeded to quite specifically debunk this argument.  The only thing he did not do was cite Bob Dunning himself when he wrote, “In particular, the plaintiffs construct a hypothetical situation in which a resident uses one extra ccf in the summer, which then causes the resident’s supply charge to be increased in the next year, thereby increasing the resident’s bill even further.”

Wrote Judge Maguire: “This hypothetical underscores a distinctive feature of the CBFR, which is that the rate is quite sensitive to changes in summer water use. This sensitivity promotes conservation, as does any system in which the rates increase with the volume.”

The plaintiffs, Judge Maguire noted, “argue that the CBFR rates discriminate between users, by penalizing users who use more water in the summer.”  He disagreed, however, writing, “there is a good reason, supported by the Administrative Record, to charge more for summer water: the system must be built to handle peak capacity, and that capacity is determined by summer usage.”

The key to understanding CBFR is the notion that peak demand on the system requires additional fixed costs and the water rate study backs this up, calculating “peaking costs” for each customer class.

So the judge concluded, “So ‘steady’ users, who do not increase their use in the summer, do pay less than typical users, but this variance does not violate proportionality because peak-period demand imposes more costs on the system than off-season demand.”

In so doing, Judge Maguire debunked the central thesis of Bob Dunning’s objection to CBFR, which he framed into the assertion without legal authority that the city violated Prop 218 with these proposed rates.

Writes Bob Dunning, “The bottom line here is that while you may not like the rate structure itself or the higher bills that land in your mailbox, that’s a matter to take up with your elected city representatives, not the court …”  He adds, “In Maguire’s opinion, which was explained in great detail in plain, simple English, the Davis rates meet constitutional muster … and that, dear friends, is pretty much the end of this discussion we’ve all been having for the past several years …”

That’s certainly not what Bob Dunning was arguing twelve months ago.  It might have been nice if Mr. Dunning had acknowledged he was wrong.

Instead, he proclaims that an appeal is unlikely.  He writes, “It seems unlikely that Maguire’s decision will be appealed … given that opponents of the water rates appear to have enough signatures to force the rates themselves to a vote of the people in June or perhaps later, appealing Maguire’s decision doesn’t make sense from a practical standpoint …”

He adds, “After all, there’s nothing in the decision, or in the language of Prop. 218, which prevents the population as a whole from voting on municipal water rates … even though the rates have been ruled to be constitutional, there is nothing unconstitutional in voting to overturn those same rates … or in voting to uphold those rates …”

While Mr. Dunning is partly correct that there is nothing to prevent the voters from overturning the rates, he is a bit premature in declaring an appeal is unlikely.  There are a number of groups around the state interested in filing amicus briefs.

Judge Maguire during oral arguments noted the discrepancy between case law and the plain language of Prop 218.  In the question as to what the relevant level of comparison was – person by person, parcel by parcel, or class by class – Judge Maguire would note, in response to the city’s argument in favor of a class by class comparison, “I understand that argument. I understand the case support for it, and there is case support for it.”

He would add, “What I’m struggling with though is how to square that concept with the language of Section 6 which says, ‘The charge shall not exceed the proportional cost of the service attributable to the parcel.’ So that seems to suggest a more granular analysis than class by class.”

In reconciling that issue, he wrote that the language of Proposition 218 would appear, “at first blush” to require the city to demonstrate on a per-parcel basis, that the rates are “proportional to the costs for that parcel.”  However, “The Court of Appeal, which this Court must follow, has rejected this interpretation, and found instead that ‘proportionality is not measured on an individual basis,’ but instead is ‘measured collectively, considering all rate payers.’”

That would appear to be an interesting issue – which ironically gets to Mr. Dunning’s original objections in terms of the parcel by parcel and user by user proportionality argument that the courts have appeared to shy away from.

In addition, a ruling against the city’s rate structure would have had a very profound impact on their ability to move forward with the water project, whereas an overturning of the rates, could potentially allow the city to simply issue new rates and hold a new Prop. 218 process.

In other words, the rate initiative actually is far less sweeping and impactful than a judicial decision declaring the rates unconstitutional.

One thought on “My View: Columnist’s Water Arguments Denied by Judge As Well”