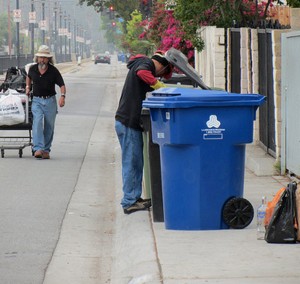 I was dismayed on Tuesday to watch the unfolding of the discussion on scavenging.  It was a brilliant presentation by Dianna Jensen – it was just, in my view, the wrong presentation and the wrong discussion.

I am going to make a series of otherwise unrelated points that I think relates to this discussion.

The first point is that whenever a law is objected to there seems to be a response that the alternative to the law is looking the other way.  That is not the case here.  I am not advocating we look the other way at crime, I’m suggesting that the law that we have passed at first reading does not seem to address the problem that the council and staff laid out.

The policy that we laid out was assessing an increasing level of fines for individuals caught scavenging in trash and recycle bins.  The city is concerned about organized groups that come from out of town, using trucks and crews of people, and who seem to be creating their own illegal business.

In addition to the nuisance, the city expressed concerns about identity theft – scavengers sorting through mail and prescription pill bottles in recycling carts.

In a discussion I had with one councilmember, I was told, “We cannot openly advocate for our police to look the other way on the dais.”  They believe that this is a step forward, that the police can simply issue a warning to members of the homeless community who are not part of the organized efforts.

“We are not systematically arresting and citing these folks with the bags of cans under the current law who are clearly in need and not professionally gleaning our neighborhoods for profits. Why would we start now?” I was told.

But that’s not what we were told the in the staff report, which argues that the current municipal code “does not include adequate enforcement or penalty clause provisions.”

Moreover, if the intent of the law is to deal with the problem of organized groups that go in and scavenge, perhaps the code might want to reflect that.  I would argue the penalties are not sufficient to discourage these groups.  Moreover, we do not have to have the police look the other way; we simple establish a threshold for the ordinance to kick in that exceeds what an individual with a shopping cart or bike could carry.

In a lot of ways this is really about the profit margin for DWR.  As Dianna Jensen noted in her staff report, we are seeing a marked reduction in aluminum and plastics.  She notes, “Decreased recycling revenue to DWR means higher costs to city and customers.”

Scavenging has been on the rise since 2007 due to the bad economy and increased CRV value.  But that ignores a possible alternative explanation for the decrease in revenue for DWR – that more customers are keeping their recyclables and turning them in themselves.

So for instance, I have a notorious Diet Coke habit and I consume large numbers of cans.  Instead of laying them on the curbside and allowing DWR to get our profit, we turn them in ourselves and reinvest in my next dose.

How do we know that some of the profit loss for DWR isn’t the result of other community members making the same decision?  Again, I’m not saying that scavenging isn’t a contributing factor, but it may not be the only contributing factor.

One question I think we need to ask is whether the city should be contracting with a private, for-profit corporation to deal with recycling.  I am troubled that our policies should be directed toward making sure that DWR is profitable.

Finally we get to the issue of public participation.  Councilmembers and city officials might have been caught off guard by the volume of comments the articles this past week generated.  If you count Robb Davis’ more general article inspired by this issue, the three articles generated well over 200 comments.

On the other hand, a councilmember remarked to me, “I also find it disheartening that some other critics did not come to public comment.”

It is not that there was any sort of unanimity on the Vanguard comments, but that’s the point – the concern leveled by the public in the comments was largely ignored by public officials during their discussion.

The city has been actively looking at ways to better engage the public and one of the things they need to start to understand is that more and more the discussions on critical issues will take place outside of the dais.

We have argued here that many members of the public do not have time to come down to make public comment or to come to council chambers, but they should have ways to participate in the process.

That leads me to address another issue that I hear on here and in the community.  The Vanguard is just a blog, so why should it be taken seriously?  Alternatively is the notion that no one reads the Vanguard.

To pull an illustration, on Wednesday, the Vanguard drew nearly 6000 unique visitors.  We have over 24,000 visits that day.  Neither of these numbers were close to records for the site.

The first month of this new site, which has new and improved readership metrics, we drew 60,000 unique visitors and over 600,000 visits.  Those numbers are probably understated because they include the weeks of Christmas and New Year’s where readership, while remaining robust, fell off from other weeks during the year.

The Vanguard is no longer just David Greenwald’s blog, where I pour out my thoughts from my living room couch.  It is a site that a lot of people read.  We have a non-profit board, an editorial board, and the Vanguard Court Watch Council.

There are fifty people on a regular basis involved in the running of this site.  And it is a site that is well read in the community and in the surrounding areas.

The council cannot ignore the voices of those in the community concerned about the impact of this policy on the less fortunate people.  I think Rob White last week raised important points about how the city can incorporate new forms of participation with old, but, at least with the readership of the Vanguard, this seems to be an issue that we need to re-think.

Share:
Previous : Drought Emergency Declared, What It Might Mean For Davis
Next : Special Commentary: Pretending to Be Something I Am

16 thoughts on “My View: Public Participation, the Homeless and DWR’s Profits”