To date, the controversy over the district’s pulling the VSA (variable service agreement) for Volleyball Coach Julie Crawford has generated many questions and much frustration in the community.  Adding fuel to the fire was the revelation that the district spent over $22,000 on a nearly 100 hour investigation into a coach’s decision about a player who happened to be the daughter of a school board member.

That investigation generated a seemingly nuanced finding, in which the investigator apparently concluded it was “more likely than not” that the coach’s decision was “at least in part influenced” by her dispute with the school board member.

While there are many specific questions in the community, many of those involve sensitive and confidential personnel matters that school board members and personnel are precluded from answering.  Many of the 18 main questions and followups that the Vanguard did pose to Board President Gina Daleiden are procedural, and we should note that Ms. Daleiden went out of her way to answer questions as directly as possible, but she did have to clear many with district legal counsel.

One of the key questions that arose last night after the Vanguard ran the story regarding the $22,000 in expenditures on the 100 hour investigation is how often these investigations occur, whether the district spends this much typically on an investigation and, if not, how much do they typically spend.

For the most part, the Board never sees most investigations, as they get handled administratively and the board generally only gets involved if and when there is an appeal.

Ms. Daleiden did state on the record that “there are different types and levels of investigation.”

“Generally speaking, you might imagine that when an investigation involves a Board Member or a top administrator, it really needs to be done by someone outside the DO (district office) rather than internally,” she said. “The nature of the complaint might also necessitate an outside person or an attorney/professional investigator. It does very much depend on the individual case.”

For the ease of understanding the first portion of questions that Gina Daleiden answers, we will use a Q&A format.  It is important though to remember that where she avoids direct answers, she may have legal constraints that prevent her from answering as much as perhaps she would like.  The way she was able to answer many of the questions was to avoid talking about the specifics of this case.  These are the answers to the first four questions.

Gina Daleiden:  “In any complaint process, once the District receives a formal written complaint, the District administration must determine which complaint policy applies and who is appropriate and available to investigate to some extent.  Investigations are often conducted by personnel within the District, by general counsel to the District, or by other investigation professionals like an attorney or a private investigator.”

Vanguard: Who is entitled to have access to either “the report” or a summary of the report?  Do you see conflicts between the investigator and other work that they have performed?

Gina Daleiden: “Because the Board itself may, in any given case, ultimately have to act in a quasi-judicial role and impartially consider the case, details or even the existence of various complaints are usually not shared with the Board until an appeal is requested.  Once the Board decides to grant an appeal, the Board may access the report and relevant material. Because the District endeavors to protect the privacy rights of employees and students, investigation documents are often deemed ‘confidential’ because they contain personnel or student information that should not be released to the public.  Investigation documents may also be privileged from release to the public on other grounds, such as attorney-client communication.

“In terms of specifics on the case you are referencing, the Board has yet to go through all of the relevant material and detail, and so at this time I do not, as an individual Board Member, have an opinion about possible conflicts.”

Vanguard: Would the complainant receive a copy of the report or a letter from the district HR Administrator?

Gina Daleiden:  “The District provides the complainant and the respondent with correspondence regarding the results of the investigation, including the factual findings, conclusions (if any), and the next steps in the process. “

Vanguard:  Would that document be considered a personnel document?

Gina Daleiden: “The District has an obligation to protect confidential personnel matters, confidential student matters, attorney-client communications, and the deliberative process.  Investigation documents are often deemed ‘confidential’ because they contain personnel or student information that should not be released to the public.  Each document is unique and is handled on a case-by-case basis at the administrative level.” 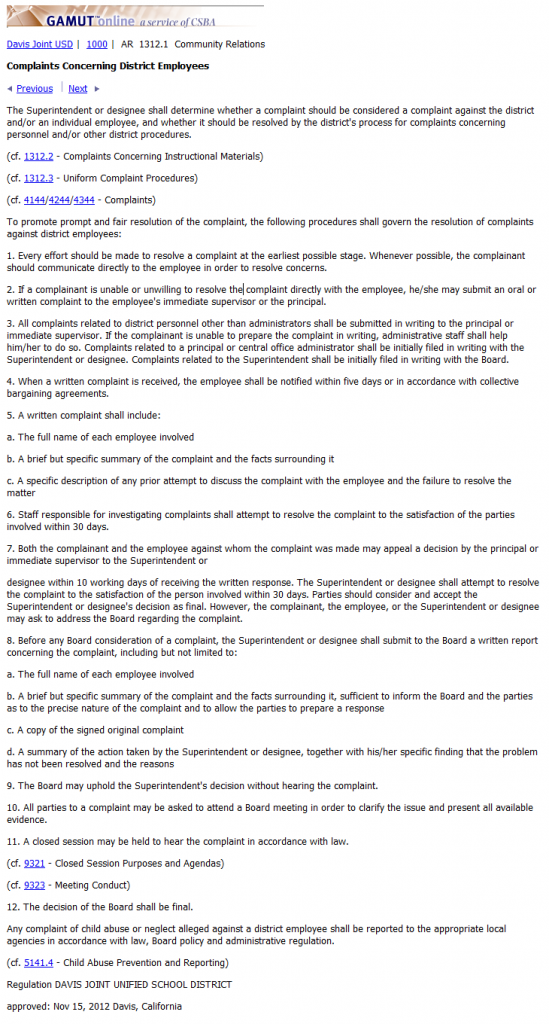 Gina Daleiden later added, “In the next few days, I expect the Board to have further detail from counsel about the appeal process and how and when we will access detailed information about this current complaint/appeal.”

As we reported yesterday, on Sunday we learned that Ron Duer and Jordan Friend have taken over the team on an interim basis.  But Rob Cole was apparently told by district administrators that he would be the interim coach and then the district changed its mind.

According to one source that asked to be anonymous, the Vanguard learned that Mr. Cole has close ties to Nancy Peterson and coached her kids in Sacramento.

Mr. Cole was quoted in the paper having believed he was offered and would receive that position; however, by the end of the day the district went with Ron Duer and Jordan Friend.

Mr. Duer said, “Jordan Friend and I are co-interim coaches until Julie gets her job back.”

Board President Gina Daleiden told the Vanguard late Tuesday, “It’s important to remember that employees are not ‘hired’ until the Board votes to approve employment.”

She explained that the hiring process for coach includes screening, panel interview, reference checks and fingerprinting.  She said, “Information is gathered at each stage in order to inform employment decisions.”

The Vanguard will receive additional responses and publish those accordingly.