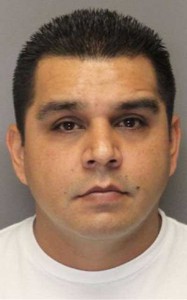 The courtroom filled with media as the long-awaited verdict in the case against former West Sacramento Police Officer, Sergio Alvarez.

It was moments later that only a partial verdict of ten counts would be declared a mistrial by Judge Timothy Fall. Fall, then proceeded to ask about the other counts.

In count one of the indictment of aggravated kidnap, rape, forced oral copulation, the jury found Alvarez guilty.

But, as Judge Fall read the verdict form, he noticed the jurors had checked the lesser offense of simple kidnap also. He was not happy to have to explain once again to the jurors that the forms were incorrectly filled out.

Thus, he instructed jurors to return to the deliberation room and either deliberate further or correct their mistake.

Judge Fall, often seemed agitated with jurors’ responses to instructions. He stated more than once, “I am limited to what I can talk about, please just answer yes or no to my question.”

Once the jurors were sent back to correct the forms, they did not return by the end of the day and were sent home until 9 am Thursday.

Of the counts the jury hung on, they explained to Fall that they could not decide on the elements of the crime or any of the enhancements that belonged to those charges.

Alvarez has been charged with sexual assault, rape by force, kidnapping, burglary and oral copulation on five victims described by Deputy District Attorney Garrett Hamilton during closing as “the down and outers.”

But he encouraged jurors not to hold their lifestyle against them.

Defense J. Toney would tell a story of five drug-addicted women who had inconsistent testimony.

A full verdict on the remaining counts will be read Thursday morning.

Jurors would also tell Judge Fall they would not be able to reach a verdict on the ten counts, even with more time to deliberate.

The count he was found guilty of so far has to do with the victim T.G.

It took the attorneys nearly a week to choose a jury.  The case began on January 28 and went to the jury on February 14.  The jury spent eight days in deliberations and has only reached a verdict on one count, with ten counts in which they are hung.

A grand jury has indicted and charged Sergio Alvarez with 28 separate counts of Oral Copulation, Rape, and Sexual Penetration against the will, with enhancements in Residential Burglary, Kidnapping, and Duress as a peace officer. Most of the events took place in or around the area of West Capitol Boulevard in West Sacramento. The alleged assaults occurred between October 2011 and September of 2012.

The five victims were identified as “down-and-out” women who were a rugged combination of homeless, prostitutes, and drug addicts. Methamphetamine and alcohol contributed to their vulnerability and fear of the police. Hamilton told the jury that officer Sergio Alvarez abused his authority and power to control and scare them.

In his closing argument, DDA Hamilton told jurors that one of the victims talked about the night she met the defendant and in what direction she saw him headed as he made a U-turn to come back and stop her, near the MetroPCS store. He stated this person had no idea the communication center was recording his route and could not have lied about it. He said we know this because we ran her name about the time she stated he stopped her. He said we also know that the date was in September because her friend had been arrested just a couple days later and the victim told this in her testimony. It all checks out, he says.

Hamilton stated, “We know Alvarez would not turn on the MAV recording system on the occasion he picked up his victims because just months earlier he was reprimanded for not using his system.” But he said, “Alvarez lied to you on the stand, he said he did not know victim #1 and did not remember ever running her name, he’s a liar!” exclaimed Hamilton, as if hammering his fist on the pulpit.

Defense attorney J. Toney claimed that the sexual relationships between Alvarez and the alleged victims were purely consensual, while simultaneously attacking the credibility of the five alleged victims.

The trial, lasting for nearly three weeks, has steadily revealed the previously unknown history of each alleged victim. Opening statements from both sides had already given the jury details of the alleged victims’ previous drug problems and street habits. All five alleged victims are believed to be actively participating in prostitution or to have been engaged in some form of lewd activity in the past.

Toney then attacked the idea that ex-officer Alvarez allegedly kidnapped and raped the women. He focused on K.R., the fourth alleged victim to testify during the trial, and claimed that her relationship with Alvarez was purely consensual. Toney called K.R. a prostitute because she gave Alvarez her number and stated that she had asked him to place her in handcuffs before giving him permission to commit sexual acts with her.

“[She’s] obviously not a victim; she’s turned on by Alvarez. She’s an addict.”