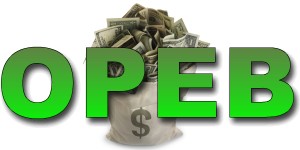 Increasingly, folks around town have been asking how the City could be continuing to have such deep budget problems even after shedding 100 staff, or twenty percent of the workforce, over the past five years. They are curious. How can this be, when the economy is improving everywhere around us, the housing market is back on its feet, and the recession is fading in the distance? And, yet, this year, with the 2014 budget, the situation appears to be even worse.

The simple fact is that our 2014 budget is really not about just our current expenses and current cost of living issues – in large measure it is about paying back our legacy debts – debts accumulated over the past two decades as our local governments refused to put aside the contributions necessary to fund either their essential infrastructure components or the retirement promises they had made to their employees. More startling yet, even with the current council’s refreshing embrace of fiscal conservatism, our newest budgets are still not fully funding what’s required to keep up with these legacy debts.

The city’s recent budget projections through FY 2018 show our retiree medical expense rising from $3.8MM in 2014 to $4.38 in 2018 – when in fact our most recent annual report indicates our “all in” retiree medical costs should have been at least $S.8MM in 2014 and for each year thereafter. In other words, and unlike West Sacramento which has been fully funding its annual retiree medical contributions since 2011, Davis has actually fallen behind in its 10 year “ramp up phase” first begun in 2008.

For perspective, it’s important to keep in mind that the 10 year ramp-up is just to get us to the point where we would begin our 30 year amortization of the unfunded balance. And, on top of that liability is the city’s underfunded pension program, which (if our state were to get real with its expectation of market returns on its pension assets), would be facing an even deeper budget shortfall for years to come.

So, how did we get to a place where our government and elected officials have the latitude to simply ignore basic laws of actuarial accounting and default on their responsibility to put aside the necessary savings each year to pay for promised benefits down the road? Isn’t that the real question?

As a business owner, friend, and fellow neighbor in a community founded upon and committed to public service – it may be up to me to ask the question, but shouldn’t the entire community be wondering the same thing? When did this tradition, which defies every tenet of California’s County Employee Retirement law (generally considered the standard for public defined benefit pension plans), first begin and why was it allowed to metastasize during recent decades?

Part of the problem can and must be placed at the feet of the Government Accounting Standards Board (GASB), for it is they who have been charged with establishing the rules and guide lines for “presumably” transparent reporting standards in public annual financial reports. Sadly, however, they have done a very poor job in the area of re porting for deferred expenditure categories related to employee compensation and benefits. As case in point, GASB regulations can neither require nor compel annual contributions be made to existing retirement programs.

Very unlike guidelines established under ERISA, which govern funding of retirement plans in the private sector, GASB’s rules serve solely as recommendations or guide lines. As if to further emphasize their agnostic position, last year GASB changed even the name of their guidelines for annual contributions from “Annual Required Contribution” to “Annually Determined Contribution.”

As one might expect, all of this lack of requirements does offer some political advantages – providing complete and total flexibility for local governments and local politicians to prioritize their funding without concern over their ability or need to make those pesky contributions to employee retirement plans.

How our laws governing behavior of public sector employers were allowed to become so toothless is a story for another day. So, how does this OPES turn out to be an issue in our day-to-day issues in managing the city? Or, more bluntly, why should you care about this part of the budget discussions?

To illustrate, let’s take a look at two very current examples: 1) Recent discussions of merging programs between the City of Davis and the University Fire Departments, and 2) the case of our City Manager who has recently been selected to head the Incline Village Improvement District.

Let’s start with the case of the City Manager who is now faced with a decision – do I stay or do I go? Yes, there are the personal aspects to the story, and then there is the compensation aspect to the story. And, what thus far has appeared to elude conversation is a resolution of the current status of his qualifications to partake in the City’s generous, post-retirement OPEB (Other Post Employee Benefits Program).

On the surface, it may be assumed to be just another detail, but digging deeper and it is far from simple.  Without knowing all the ins and outs of the current Davis policy on OPEB qualifications at retirement, it would appear that Mr. Pinkerton does not meet the minimum 5 years of service requirement to be eligible to take his OPEB benefits with him if he elects an early retirement.

Why this matters is very relevant to this conversation. Particularly for a relatively young employee (not yet 55), the prospects for living another 30-35 years are fairly high (particularly given the premium quality of healthcare afforded under the city’s OPEB program). To simplify the problem, let’s assume that Mr. Pinkerton retires now, but lives to age 85 (and hopefully longer as I particularly like and respect Steve) .

Let’s just say that works out to 30 years at $20,000 per year or a $600,000 PV benefit (based on the assumption that healthcare will rise at the same rate as the state’s theoretical investment return). from a practical matter, this means that the city might as well be prepared to hand Steve a check for $600,000 on his last day on the job. Everybody get that? You see, if Steve successfully qualifies as “retiring” from the City of Davis – then he qualifies for lifetime healthcare insurance coverage courtesy of the citizens of Davis – even if he goes on to work for Incline Village, Nevada (where, by the way, all they offer a much more basic healthcare program that does not appear to offer lifetime, employer-paid benefits as does Davis .)

So, that’s one of the major issues of having “defined benefit programs” with no associated pre-funded assets – it’s not like one finds with a pension where the investment value of his pension asset follows him to a new job. Then comes the other side of the ledger, which comes into play when we go to interview for the manager’s replacement.

How, exactly, do we evaluate as between two candidates one aged 35 with ten years of background and experience and a good twenty years before retirement, and one aged 5O, with a much higher price tag but an impressive record of achievements in prior positions and with many good years ahead, but maybe only interested in working for the next five?

Because of the unique aspect of the unfunded OPEB program, one has to ask: “Is candidate two worth the signing bonus of $600,000 associated with the future liability for his lifetime healthcare?” Or, another way of looking at it, if we want to go to a “fully costed approach”, are we willing to impact the city operating budget to the tune of $120,000 a year for the next five years to match what will owe the manager at the end of his or her term of service?

But in reality that is not how these things are handled. Rather, and under the current “pay as you go system” as practices by most jurisdictions he re in California, there would only be the current year’s cost impacts that would impact the city’s budget – i.e. $20,000 per year – while the balance of $600,000 in future benefits would land on the books and impact subsequent city budgets – year after year for 30 years – extending far, far after the employee’s term of service is over and done.

And, mind you, just as soon as that manager retires, we will be replacing them with another and we will be back paying that same base line premium every year for that new employee.

Hopefully, this example makes sense to those who are not financially inclined. If not, then perhaps the case of the proposed merger of UCD and COD Fire Departments would make it easier to understand. It is the same basic exercise, only multiplied by the number of staff involved.

Because neither the university or the city has accumulated any investment asset to fund the defined benefit being discussed, when employees transfer from UCD to the City – and unlike the instance of their PERS-asset backed pension retirement account – there would be no “asset transfer” (since there is not associated “account” involved) to help fund their future post-retirement health ca re benefits when they subsequently retired from the city of Davis. Bottom line, we are forced to begin evaluating each employee on the basis of their potential impact to our balance of unfunded liabilities.

The candidate who is only 30, with another 20 years of service, would have far less impact on our current budgets than a more senior candidate, with perhaps five years before retirement. In the case of the younger employee, we could amortize the cost of funding their future benefits over a 20 year service life (or an additional $30,000 per year) versus the older candidate with a projected service life of only 5 years (or an additional $120,000 per year).

From a financial standpoint, which candidate would you favor? Is this fair to the older, more experienced candidate? Is it legal to make decisions on this basis – i,e. the employees fully burdened cost to the city? This approach may sound odd to the average citizen (or city employee) but this is the exact same analysis faced by professional football teams every year as the contemplate next year’s roster and the possibility of trades and new player acquisitions. It’s not a personal thing – it’s about the dollars and sense involved in managing a successful franchise.

Doby Fleeman is a local Davis businessman and former solar contractor with an MBA in Finance & Accounting from UCLA and BA from Stanford in Environmental Biology.

Share:
Tags:BudgetDavisOPEBPERS
Previous : Should the City Consider Outsourcing Jobs As a Means to Cut $5.1 Million Deficit?
Next : Vanguard Analysis: Has the City Already Lost Control of the Tax Message?