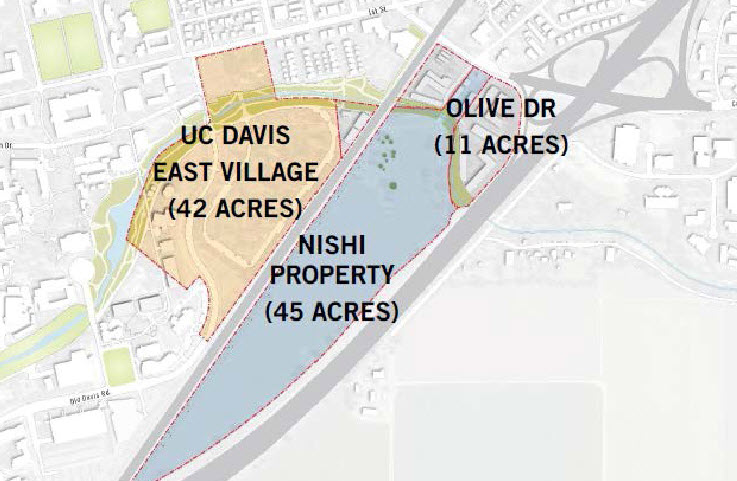 Back in November, 2012, the Davis City Council approved a “Pre-Development Cost Funding and Negotiation Agreement for the Nishi Property.”  The goal was planning the site as a mix of university-related research park development complemented by high-density urban housing.

On October 1, 2013, “[t]he City Council committed funding for the joint planning effort and approved the following City-specific goals to plan the Nishi property and nearby UC Davis campus property as a mixed-use innovation district: a. Jobs for Davis residents, space for Davis businesses, and furtherance of city-wide efforts to position Davis as an innovation hub; b. High-density urban residential development near downtown and employment centers; c. Improved appearance and function of the “front door” to Davis; d. Support for downtown Davis by providing customers for businesses, hotels, arts, and entertainment; and e. Revenue generation to support city services throughout the community.”

Staff reports that over the past several months, representatives “from the City, UC Davis, the property owner, the county, and LAFCo [Local Agency Formation Commission] have been working diligently to get to a starting point for community discussion on planning for the mixed-use innovation district.”

The biggest question is going to be traffic impacts and access issues, particularly if the project will have an access point back out to Richards Blvd.  Toward that end, staff reports that the applicant has already engaged traffic and archeological consultants for background investigations and conducted preliminary engineering feasibility for a railroad grade-separated crossing, and obtained approval from UPRR (Union Pacific Railroad) in concept.

Many believe the site is best suited for a university access point under the tracks around Mondavi Center.

Staff is seeking direction to begin community outreach on the alternative design frameworks as well as authorization to apply to the Strategic Growth Council seeking grant funds for technical implementation plans for the district.

Staff reports, “In 2012-3, the City, the County, and the Campus submitted an application to the Strategic Growth Council for a Sustainable Communities Planning Grant. The focus of the application was to design a collaborative process for planning the Nishi property and East Olive Drive redevelopment.”

The application had support letters from community interests such as the Davis Chamber of Commerce and Downtown Davis, the Sierra Club, SACOG (Sacramento Area Council of Governments) and Davis Bicycles!.  Although the application scored very well, competition was strong and the grant was not funded.

“The Strategic Growth Council recently issued a Request for Proposals for the latest round of Sustainable Communities Planning Grants,” staff writes. “We note that several of the activities identified in the 2013 application – designing a collaborative process, exploring innovative concepts, and planning based on collaboration – have been completed or are underway.”

Therefore, “Staff is proposing that the City submit an application for grant funding for implementing the selected design framework for the Gateway District in a manner that is environmentally and financially sustainable. The specific focus objectives for the planning grant are to reduce automobile usage and fuel consumption, promote water conservation, and promote energy-efficiency and conservation.”

Staff continues, “Budget estimates are currently in process, but the grant request would likely be in the $5-600,000 range. Environmental review is an eligible expense during this funding cycle, but staff anticipates the need for a significant match for the application to remain competitive. Local match requirements would come from funds budgeted for the Nishi planning effort, plus a contribution from UC Davis for the components applicable to the district as a whole. The application deadline is February 28, 2014.”

Staff asks a number of questions of the community.

What aspects of the alternative frameworks are consistent with the City’s goals for the district? How can they be improved? How can the project on the Nishi site be one that will receive Measure J/R approval?

On alternative, the Vanguard floated back in September the idea that the city and university swap Nishi and Solano Park.

We argued at the time there are good reasons to consider it.  First, nestling student housing into Nishi would could avoid a Measure R vote if the land were merely transferred to the university.

Second, the site could easily host some high-density student housing on its 44 acres.

Third, by making it university rather than a city development, the issue of access onto Olive Drive could be negated.  The university would simply have to build a below-grade crossing for bikes and vehicles which would then have ready access to the freeway.  Students would be able to walk or bike onto the university and easily into the Davis Downtown – giving a boost to the downtown district.

Student housing would be in close proximity to both the university and city, reducing the impact of cars on city streets.

The city would then be able to fully utilize Solano Park as a technology park, making use of the close proximity of both the university and Davis Downtown to host university spin-offs and become part of the university’s vision for a technology and information hub in the area.

The current plan for Nishi would only have space for about 110,000 square feet of park at three levels.  Solano Park, as indicated, is under-utilized right now as low-density student housing, and the university is looking to increase its density.

However, at least in September, that idea did not seem to gain traction.  The city is already looking at a process that will have two, possibly three Measure R votes in the next year or so, and perhaps there is a better way forward that would enable both the city and university to gain what it needs.

23 thoughts on “Staff Seeking Council and Community Input on Nishi”