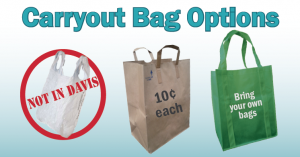 The city of Davis has put out a single-use carryout bag ordinance page in advance of the ordinance that was passed on November 12, 2013, and which will go into effect July 1, 2014.

As the city explains, “All stores and restaurants located within the limits of the City of Davis that sell perishable or non-perishable goods. These include, but are not limited to, all grocery stores, convenience stores, minimarts, liquor stores, drug stores, restaurants and take-out food (i.e. fast food) establishments.”

Nonprofit and charitable reuse organizations do not have restrictions.  Under the ordinance, “Businesses may not distribute single-use plastic carryout bags at the point of sale” and “Businesses must charge a minimum of 10 cents for each paper or reusable carryout bag provided to a customer for the purpose of carrying purchased goods away.”

The city notes, “The Single-Use Carryout Bag Ordinance does not prohibit customers from using bags of any type that they bring to the store themselves or from carrying away goods that are not placed in a bag, in lieu of using bags provided by the store. If you can comfortably carry your paid purchases out by hand, that is one option; or your goods can be placed into the shopping cart or basket for transporting to their vehicle; where they can be unloaded. 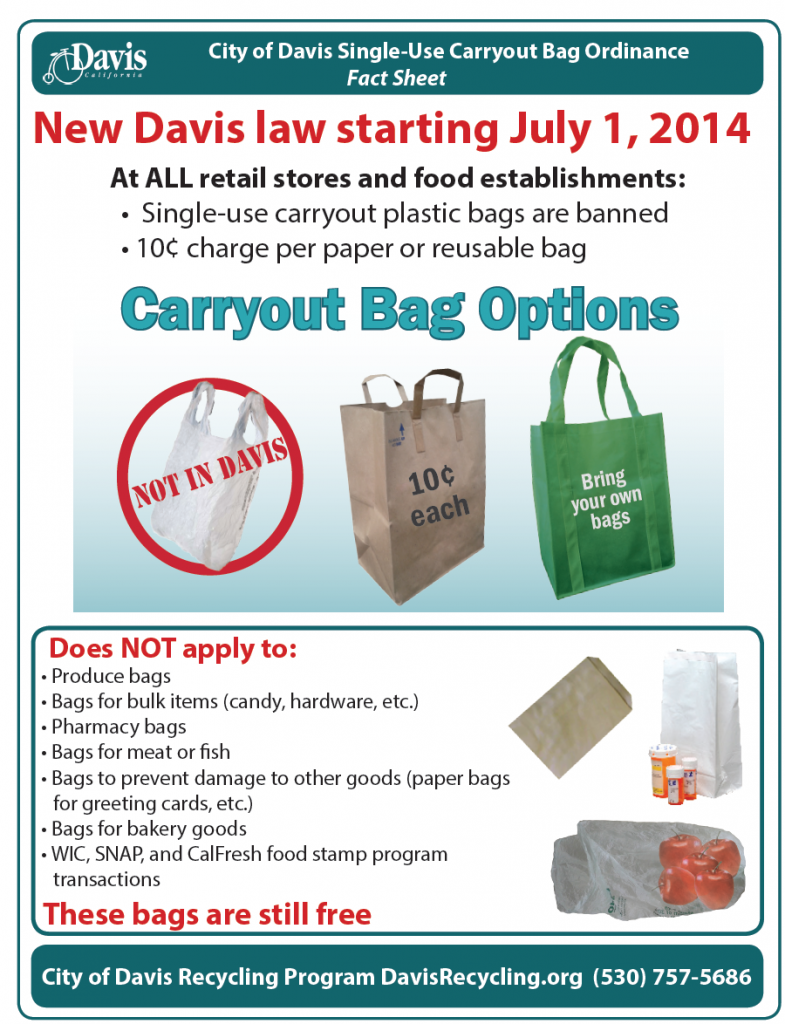 The city adds that citizens have many choices available when they shop or order food. You may either:

The city adds, “The 10 cent charge for recycled paper carryout bags encourages the use of reusable bags. This cost pass-through reimburses retailers for the costs of providing recycled paper carryout bags to their customers. All of the revenue from the cost pass-through remains with the store. Studies have shown that a charge of 10 cents per paper bag would discourage customers from simply switching from one single-use bag (plastic bags) to another (paper bags). Customers may bring their own reusable bags every time they shop to avoid paying 10 cents for a paper bag.”

An article Thursday in the PublicCEO notes that San Diego could become the next big city to limit single-use plastic bags following Los Angeles, San Francisco, and San Jose, among at least sixty other communities.

Chris Kato a policy analyst at Equinox Center, a nonpartisan, nonprofit research and policy center based in San Diego, notes, “Those plastic bags you saw on the side of the road on your way to work today? Whether thrown in the trash after one use or reused multiple times, those bags linger in the San Diego River or make their way to the ocean, where they last between 400 and 1,000 years.”

“Plastic bags also release toxins as they photo-degrade in landfills; about 95 percent of the 500 million plastic bags used annually in San Diego end up in a landfill,” he writes.

Mr. Kato argues that existing research suggests that the ban will not negatively impact the economy.

He writes, “Equinox Center, which supports the limited use of plastic bags, recently released a comprehensive study on the economic and environmental impacts of plastic-bag reduction policies. Our study calculated the impact of a reduction ordinance in San Diego based on data from other California cities. San Diego stands to reduce single-use bags by 86 percent — an annual decrease of 348 million bags.”

Equinox Center found that “local economies, including affected retailers and their customers, are not harmed in the long term. Plastic-bag reduction ordinances have been implemented successfully in 90 California municipalities.”

Two of the largest cities with reduction ordinances, San Jose and San Francisco, reported “no sustained negative (economic) impact to retailers” after enacting the ordinances. He notes, “A short-term increase in baggage costs, due to increased paper bag usage, is mitigated as consumers transition to reusable bags.”

“In fact, plastic-bag reductions are likely to eventually benefit the economy and save taxpayers and cities money,” he argued. “The city of San Diego most likely will experience savings through litter abatement. Plastic-bag cleanup isn’t cheap — it costs the city at least $160,000 a year.”

In San Francisco, “The Office of Economic Analysis released an assessment of projected economic impacts on the local economy related to the plastic-bag ordinance, including proposed increases in restrictions.”

San Francisco’s assessment, he notes, predicted a “slight positive impact on the local economy … as a result of the overall decrease in bag-related costs post-ordinance. It also noted that positive economic multiplier effects could occur alongside the projected increase in consumer spending associated with decreasing product costs passed on by retailers.”

San Francisco retailers would expect to see “a savings of $3 million over the course of a year under the strengthened ban, no longer having to pay for so many single-use bags.”

“For consumers, Equinox’s study showed households experience an estimated cost of $7.70 in the first year after the ban to buy reusable bags and to account for fees associated with paper bag usage. Recurring costs should decrease over time because of the long lifespan of reusable bags,” Mr. Kato writes.

He adds, “The ordinance under consideration for San Diego includes a 10-cent paper bag fee; shoppers would be charged for a paper bag if they do not bring their own reusable bag. The fee goes back to the retailer to partially offset the cost of the paper bags and to comply with the ordinance. Customers on government-assistance programs would be exempt from the paper bag fee.”