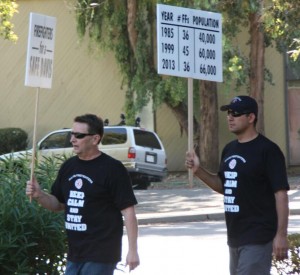 From 2002 until 2008, the Davis Professional Firefighters Association dominated the Davis City Council, gaining the election of seven of their nine endorsed candidates.  In a four-election cycle period of time, only Sue Greenwald in 2008 and Lamar Heystek in 2006 were elected without the backing of the firefighters.

This changed in 2010 when first Joe Krovoza, then Rochelle Swanson and finally even Sydney Vergis, who had received the endorsement and substantial money in 2010, eschewed the firefighters’ endorsement.  That meant that firefighters could not pump in $3000 to $4000 in bundled $100 individual contributions and could not spend $12,000 on a mailer and delivering door hangers.

By 2012, no one on council had accepted firefighters’ money or endorsements and, as a result, we saw City Manager Steve Pinkerton hired with a clear goal of cleaning up the results of a decade in which we saw enhanced benefits, four on an engine, and a 36% pay hike.  By 2008, firefighters were receiving on average $175,000 in total compensation and that figure did not include overtime.

In 2013, the city council unanimously raised response time goals, enacted boundary drop and then, on 3-2 votes, reduced fire staffing from 12 to 11 and implemented shared management services in which UC Davis’ fire chief would run both UC Davis’ fire department as well as the city of Davis.

While the firefighters were quiet in both 2010 and 2012 city council elections, we expect 2014 to be a very different story.  The firefighters fought the city every step of the way in 2013, eventually losing on all four of the policy changes as well as having their new contract imposed on them by a unanimous 5-0 vote in December.

Attempts by the firefighters to organize the community were less than successful.  They attempted to walk precincts and hold community meetings last winter, and while those efforts produced a few community members coming to council meetings on their behalf, their letter writing campaign actually resulted in a large percentage of citizens supporting reform.

Efforts to organize a quasi-grassroots – i.e. astroturf group – Friends of the Davis Firefighters proved fleeting.  Protests in front of city council and a no-confidence vote yielded little in the way of traction.  And, while the firefighters claimed 2000 signatures on a fall petition drive, it was never turned into council.

However, to take the efforts of the firefighters lightly is to miss their critical, yet more subtle, successes.  First of all, their financial filing show that this is a very formidable group.  In a 990-EZ filed on September 24, 2013, it showed the union with an ending fund balance of $353,573 in 2012 down from $404,423 at the end of 2011.  While more recent filings are not available, the amount of assets by the Davis Professional Firefighters easily trumps other organizations. 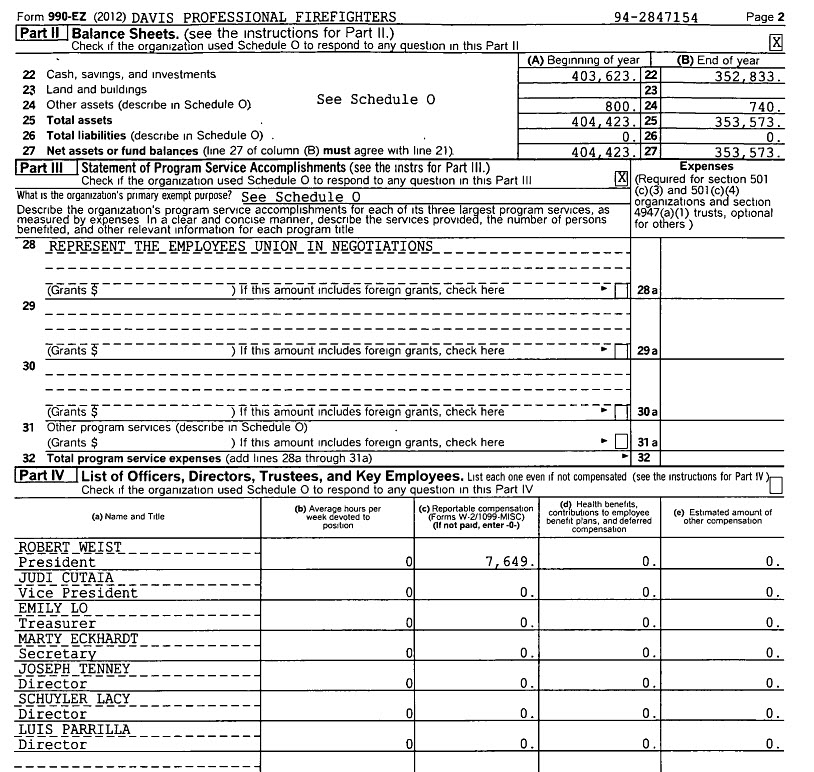 In the meantime, Bobby Weist and the union have shown to still yield a great amount of political influence.  It was announced by the governor’s office that “Bobby Weist of Vacaville, a longtime Davis firefighter, was appointed by Gov. Jerry Brown to the California Volunteers Board of Commissioners.”

In November, the Vanguard learned that four of the highest elected officials within the city of Davis: Senator Lois Wolk, Assemblymember Mariko Yamada, Supervisors Don Saylor and Jim Provenza, as well as former Supervisor Helen Thomson, wrote a letter to the Davis City Council opposing the shared services agreement.

They write, “We urge the Davis City Council to take another look at the serious long-range consequences of this proposal before contracting out any of these core municipal functions. There is a key difference between sharing or coordinating services and merging governance with the constitutionally separate and unelected Regents and Chancellor.”

They argued, “We believe this decision was made in haste and without a full examination of the proposal’s implications.”

The writers added they found it “deeply disturbing” that the council “would take such quick action on an item as critical as public safety management, relying solely on the simple presentation of a consultant report and without attempting to conduct further analysis or seek any real public input.”

They continued, “Consolidating the City of Davis’ fire management authority with a University whose central mission has nothing do with providing public safety services could have serious consequences in our community.”

While the letter writing campaign did not reverse the 4-1 council vote from October 2013, it did flip Mayor Pro Tem and candidate for Assembly Dan Wolk who supported the agreement in October but voted to oppose it the second time around.  Of the letter writers, six have endorsed Dan Wolk.

Last week we reported that the Mayor Pro Tem was sitting in the lobby with Fire Captain Emily Lo, who appeared to be briefing him on precisely what to ask and what points to make.

Mayor Pro Tem Wolk then questioned some of the report, its motivation, and even accused the city manager of making unprofessional comments.

Later, near the end of the item, he would add, “I was very disconcerted by your sentence at the end of overtime saying, ‘It is interesting to note that once the staffing levels were reduced, making the extra Firefighter II available for coverage of the first vacancy that the sick and vacation usage increased.’”

He said that this “is an insinuation that the firefighters are taking more sick leave and vacation time on purpose… because of this new policy.”  He added, “I found it very disconcerting again with regards to getting unbiased information to us, that that was in there.  I thought it was inflammatory, I think what it insinuates is very inflammatory.”

Steve Pinkerton responded, “Point taken.  I’m sorry if it seemed inflammatory.  We’re just doing a data analysis and pointing out the disparities in the data.”

The firefighters may have also succeeded in running the city manager, whose work helped to implement most of the policy changes last year, out of town.  The Vanguard reported that two of the councilmembers, Lucas Frerichs and Dan Wolk, sought to fire Mr. Pinkerton last November.

We have since learned that the city manager, although he survived that effort, is seeking employment at Incline Village, which has offered him a position as their general manager.  While he has not officially accepted as of yet, that may be only a matter of time and formality.

An agenda seems to suggest that a contract will come forward at their next meeting for approval.

The stakes are high for 2014.  Joe Krovoza has been a reliable vote for reform, both in June 2011 when he voted to reduce employee compensation by $2.5 million and throughout 2013 when he was part of 3-2 majority, as was Rochelle Swanson.

Joe Krovoza will leave the council as he runs for the Assembly.  Rochelle Swanson runs for reelection.  Both Robb Davis and Daniel Parrella came out in favor of the reform measures when they spoke to the Vanguard.  However, Sheila Allen told the Vanguard of her opposition to two of the critical reforms.

“The change in staffing,” she said, “from where I sit today, I have concerns about the decrease from 4 to 3 at a station for the amount of savings that it revealed.”

“I think I would have kept it at four,” she stated.  “I don’t think that the cost savings really is sufficient enough to have us not have them do their jobs.”

“Shared management,” she said.  “Well I have some concerns.”

“I again, back to the cooperation, I think they need to work together as carefully and as seamlessly as possible,” Ms. Allen said.  “But I have concerns about giving up the city’s control and not being directly over the whole fire department.”

One of the big questions for 2014 will be how the firefighters attempt to approach wielding their influence.  It seems that gone are the days when the firefighters will bundle cash contributions and drop door hangers.

Sheila Allen told the Vanguard, “I will not be actively seeking out bundled or organized financing from any group, but I don’t have a problem with receiving funds from one individual.”

She stated, “My influence cannot be purchased.”

She did say she would not have the firefighters deliver fliers or actively campaign on her behalf, but she said that she is not decided on whether she would take their endorsement.  “I don’t know, I haven’t decided,” she said when asked by the Vanguard.

But the stakes are high for the firefighters and they have a bundle of cash on hand that they need to utilize one way or another.  We will see what 2014 brings.

40 thoughts on “Sunday Commentary: Firefighters Storm into 2014 Loaded For Bear”