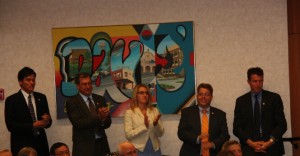 Yesterday’s story in which we posted recommendations for endorsement told an interesting but unstated tale: the change in the partisan make up of council.  In 2010, all five of the members of the Davis City Council, a non-partisan office, were Democrats.

This year the number is three: Joe Krovoza, Lucas Frerichs, and Dan Wolk.  Rochelle Swanson and Brett Lee are independents.

More interesting perhaps is that of the major candidates that are known at this time, there is only one Democrat – Sheila Allen.  Robb Davis is registered as a Green, Rochelle Swanson as an Independent, and John Munn who just recently entered is a Republican.

How meaningful is this shift?

The trend in California as a whole has been a shift away from party registration over the last decade or two.  While the gap between Democratic voters and Republican voters has widened, but the fastest growing group has been those voters with no party affiliation even as Democratic officeholders and candidates have come to dominate statewide politics.

In many ways, the trends in Davis mirror those statewide.

The movement – if you can call it a movement – away from the Democratic Party on the city council, which held a monopoly for much of the last decade until Rochelle Swanson’s 2010 election, does not appear to be a marked shift to the right.

For sure, the council has become more business oriented, pushing forward a more robust economic development strategy, but they have done so with clear support from liberal and even progressive elements on the council and in the community.

On the other hand, the council has moved forward with strong commitment on environmental issues with support for continued carbon neutrality goals, reduction in wood burning and plastic bag ordinances.

The council has remained supportive of marriage equality, human relations, and other such issues.

Of course I have left the 800 pound elephant in the room for the final portion of the discussion.  From 2000 to 2010, Democrats dominated the Davis City council at the same time employee benefits were increased from four on an engine, to 3 percent at 50, to employee compensation increases across the board, it might appear that there is a correlation between Democratic politics and city fiscal policies.

At the same time, in the last eight years, it has been Democrats on the Council – Sue Greenwald, Lamar Heystek and more recently Joe Krovoza who have led the way on fiscal stability.

In recent years they have been joined on key votes by Democrat Dan Wolk and independents Brett Lee and Rochelle Swanson.

While we may disagree with Mayor Pro Tem Wolk and Councilmember Frerichs on the smaller issues involving the fire service, there is little doubt that the overall climate of the city has changed.  It was Dan Wolk who cast the deciding 3-2 vote in 2011 for a $2.5 million reduction in employee compensation.

It was both who joined with their colleagues to impose last, best, and final offer on the DCEA and Firefighters bargaining units this past fall.

And so while the recent decline in the influence of the Democratic Party on the council has coincided with fiscal policy changes, it is unclear that this is more causation than coincidence.

There seems to be emerging a clear consensus in the community of fiscal sustainability and that appears to cross party lines.

There is a of course a danger in the Yolo Democratic Party inserting itself into non-partisan races and part of that is that the issues raised in their endorsements recommendations are not always burning issues in the community or the respective offices.

It also excludes from consideration by party-identification only, otherwise good and qualified candidates that ironically would also be solid champions of the values and principles of the Democratic Party.

California – probably wisely – made the decision to move away from partisan local offices.  While that has often been blamed for the decline of the strength of party, it has allowed for more collaborative work at the local level.

There are those who argue that all political offices are partisan – to some extent of course that is true – but to an increasingly larger extent, at least in Davis, the ability to work together has transcended partisan ties… at least for the most part.

14 thoughts on “Analysis: Meaningful Shift Away From Partisanship on Council or a Momentary Blip?”