The school district’s appeal meeting will take place on Thursday, March 13, not in community chambers where it can be broadcast live, but rather in the Conference Room in the District Office Building on 526 B Street.  The closed session will begin at 6 pm and open session will begin sometime after 7 pm.

In order to allow for a more robust discussion the district has three open session items.  First will come any announcement of decisions made in closed session, which will focus on the immediate determination of the appeal.

Finally, the district has placed a first read of a new conflict of interest policy, which clearly is developed out of the issues that arose last year, where in February Nancy Peterson first voted to pull a consent agenda item on Coach Julie Crawford’s VSA.

In July, Nancy Peterson would be the lone dissenting vote in a 3-1 vote, with Tim Taylor not on the phone line when the vote occurred.  She then threw fuel on the fire when she stated, “My vote reflects nothing more than my continued pursuit of ideals centered on children. I cannot in good conscience vote to approve Ms. Crawford as a coach for young adults.”

Clearly, there was a conflict between her personal experiences and responsibilities to her family and her official duties.  Could a conflict of interest policy be reworked to accommodate that?

The policy cites an example where a loan agreement was voted on, a “loan agreement where the recipient of the loan was a corporation owned by the board member’s adult son.”

It notes, “Although the board member was not financially interested in the contract under the PRA or Government Code 1090, the Attorney General determined that abstention was necessary in order to avoid a conflict between the member’s official and personal interests and to avoid the appearance of impropriety.”

Board policy notes, “A Board member shall abstain from any official action in which his/her private or personal interest may conflict with his/her official duties.”

That would seem to cover this incident.  “Districts are encouraged to consult legal counsel if situations arise that raise the question as to whether such a conflict exists,” the policy reminds. 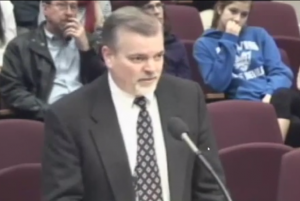 In the meantime, additional information has come out with regard to the findings by independent investigator Alexander Sperry.

When Chris Saur of the Davis Enterprise first broke the news on February 11, 2014, he wrote, “Retaliation may be at root of coach’s dismissal.”

As we noted, quoting at the time: “The complaint triggered the investigation, which was completed around Thanksgiving, when the findings were sent to the district.”

Mr. Saur reported that Mr. Sperry’s conclusion was detailed in a December 17 letter from Matt Best (Director of HR for DJUSD) to Robert Peterson.

He then quoted from the letter, that the finding was that ”more likely than not, Coach Crawford’s decision to cut [Vanguard redaction] Peterson from the varsity volleyball team was influenced, at least in part, by Coach Crawford’s feelings about Nancy Peterson.”

The Vanguard would learn that the letter was leaked by Mr. Peterson himself to the newspaper.  At the time and several times since, the Vanguard has questioned the decision by the newspaper to print from what was a confidential personnel document in which only one of the parties – Mr. Peterson – consented to the release of sensitive information.

Moreover, the use of the daughter’s name was criticized – ironically, by the Petersons who were the leaking party.

Even based on that limited leak, the public questioned the strength of the findings mixed within the words, “more likely than not” and “influenced, at least in part.”

Mr. Hudson writes, “The Davis school district hired an attorney to investigate the complaint and prepare a report at a cost of $22,041. The investigator concluded that ‘coach Crawford’s decision to cut (the Petersons’ daughter) from the girls volleyball program was influenced, in part, by her personal feelings about Nancy Peterson’ but also added ‘at the same time (the investigator) does not find that coach Crawford acted with “willful mal-intent” to harm (the Petersons’ daughter). … Rather, through no fault of her own, (the daughter) simply became a casualty of the ongoing “volleyball drama” involving coach Crawford and Nancy Peterson.’”

Aside from Mr. Hudson’s very careful redactions of sensitive information, he for the first time reports the second part of Mr. Sperry’s findings that Mr. Sperry did not find that Julie Crawford acted with “willful mal-intent” or the intention to actually “harm” Ms. Peterson.

The new information clearly changes the entire context of the letter.  It calls into question the nature of the public comments by Robert Peterson back on February 20.

“My issue was a disagreement between this coach and her friend the previous coach and my wife at whatever level became simple retaliation,” Mr. Peterson told the board during public comment.

Mr. Peterson would go on to state, “It’s documented.  The threats are there.  The email chains are there.  We presented all of this information.”

The implication that there were threats is undermined now by the belated disclosure that the investigator found there to be no “willful mal-intent” on the part of Ms. Crawford.

At the same time, the new information bolsters the questionable nature of the initial decision to print from a leaked document that, as we have noted, is confidential in nature.  While Mr. Peterson consented to the release of the information, it is without question that Ms. Crawford did not.

The decision to selectively quote from the article was misleading at best.  The paper could have averted the perception that the initial report was framed by Mr. Peterson by releasing a redacted version of the document – if they really felt that releasing the information was in the best interest of the parties involved.

The new information may of course change the public perception of this conflict and would seem to bolster a decision that the board might make to overturn the decision by district administrators to not renew the VSA.