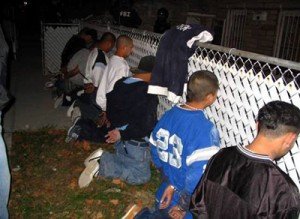 The jurors came back early this morning with a verdict for the four co-defendants in what would go down in history as Operation Red Sash, a case that started out to be a drug bust among 18 alleged gang members, from the notorious West Sacramento Broderick Boys to the Northern Riders.  It was less than two full days that they deliberated on the verdict.

The jurors would find all four co-defendants not guilty of any of the gang-related charges. The only charges upheld were against defendants Wayne Lewis and Robert Montoya for selling and conspiring to sell drugs to undercover YONET agents, Gary Richter and Ryan Bellamy.

When the Vanguard asked one juror why they decided on the acquittal, he said, “There was just not enough evidence to pin the gang enhancements to the drug sales, it left us with a gap for reasonable doubt.”

“Did you believe the witnesses were credible?” asked the Vanguard of a juror. “Well, there were some holes in a couple of stories told by one of the witnesses but I felt the YONET agents were just doing their job, it is not unreasonable to think they might make mistakes, everyone does.”  He stated, “From the beginning, nothing was ever really clear and direct evidence that could prove anything either way.”

The second trial is set to begin on July 14, 2014. It will be a continued part of the Operation Red Sash case, with other alleged gang members who were arrested during the conclusion of the undercover investigation.

It is possible, said some of the defense attorneys, that, having an acquittal on the gang enhancements in the first trial, the second one stands a chance of being dismissed. It would be up to defense to file the motion and up to Judge Mock to rule in favor of the dismissal. But it is too early to speculate.

Anxiously awaiting the verdicts were family members of the defendants. As the Not Guilty verdict was read for the defendants Esiquiel Butcher and Guillermo Rosales, emotions could not be held back, and the two burst into tears.

It has been two long agonizing years of incarceration for Butcher, who was later released from custody into the arms of his wife and mother-in-law.