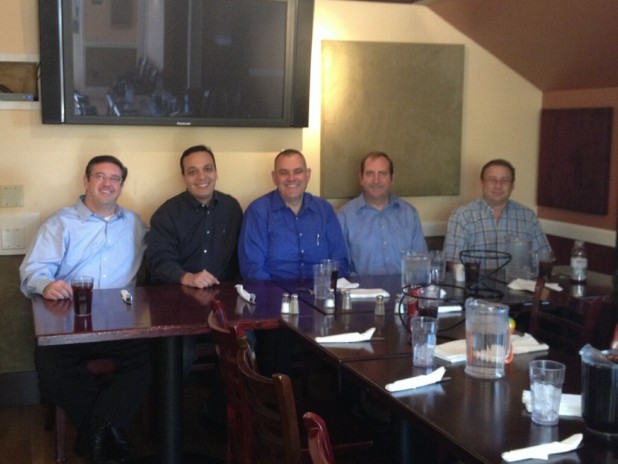 On Saturday there was a “meet and greet,” luncheon for Yolo County judicial candidate, John Paul Brennan.

I attended with the desire to get to know him a bit more by virtue of some of his closest friends and colleagues. A bit of seeking out what John was made of, in the words of his friends and coworkers.

Invited were a few of those who have worked alongside John who could talk candidly about the kind of lawyer and man he was, and this was the result.

John Brennan introduced himself and gave a little bit of his history as a lawyer. John said, ” I started at the DA’s office in 1994, in San Francisco then moved to Kings County and on to Sacramento County District Attorney’s Office.” John said, and after being a prosecutor for 10 plus years, he and his friend/colleague started in private practice together in 2000.

John Brennan says he worked with former Public Defender Martie Tejeda and they became close friends, later deciding to leave the county office and go out on their own in private practice. He said he decided to run for Yolo County judge because he felt he had what it took to be a good judge. He said having the experience of being a prosecutor and then criminal defense attorney, you are able to bring more knowledge to the courtroom.

Brennan  has lived in the West Sacramento community for over 9 years now, with his wife and five children.

Attorney Larry Pilgrim talked about how he and John had worked against each other in Sacramento County during the time Brennan was in the district attorney’s office. Larry said, “John was tough as nails but never rude or evasive and the temperament is there.” Larry says, ” I knew John when he only had two kids, about 15 years now.” He said it is so painful to do a trial with a judge who comes from civil cases and probate court and who just doesn’t have the experience in criminal law.  Larry said, “Too many prosecutors think you have to be rude and abrasive but John was never that way, he was just tough.” He said, “You need someone who has seen it from both sides, prosecutor and defense, John has that.” Larry stated, “I think John is extremely qualified as a candidate for judge.”

Attorney Martie Tejeda said he met John when John was a deputy district attorney and he was a deputy public defender. He said he has known John for about 14 years.  He said there were about 30 cases a day the two had to negotiate on together and John was always in accord with the cases. Martie said on the ones we disagreed about, John always listened and was fair.  Martie said that John is someone who is willing to listen to both sides and make a good decision.

Defense Attorney Jeff Raven said he met John when he worked a gang trial with him in 2007. He said, “One of the first gang cases that I had done, John was instrumental in that defense because he knew how to cross-examine gang experts, he is certainly one of the strongest defense attorneys I know and has the background to really truly understand both sides and be fair to everybody who comes through the courthouse.”

Raven said, “I think someone like John can be an improvement in our judicial system.”

Defense Attorney Dan Olson says he met John in 2009. Dan said, “I think John has a very good understanding of the law and has also been instrumental in business.”  Olson said he rented the office space next to John where they have worked alongside each other since 2009.  He said, “I come from a family with all government employees so I had no experience in running a business, but John taught me a lot about running a business.”

“As a judicial candidate, John is one of the very few people I know who will always do the right thing.”  Dan said John will not do favors for close friends even if he is a judge. He said, “John has never given into pressure like that and he has always done the right thing.”

Attorney and friend Jeff Raven stated, “John is not going to be lenient on crime,  even if he has to make a tough decision, it will be the right thing, the just thing to do and you need that to be a good judge, not everyone has that.”  Raven said, “John has that experience.” He said working as a prosecutor and on criminal defense has given him the qualifications to be a good judge.

Raven said, “John has been all over the state too, gaining more experience.” He says, ” You figure,  95 percent of all cases in Yolo County are criminal cases, and one of the most dangerous things about a judge is one who does not have the qualifications to make decisions in criminal court because they do not know the law enough.”  John does, he stated.

Brennan explained what experience stuck out in his mind most throughout his career. He said, “One of the first cases I had as a prosecutor was a felony child abuse case that I felt was overcharged. After reading all of the evidence of the case, come to find out it was more that the father was trying to protect the child from being bit by the family dog after the child had been repeatedly hitting the dog on the head with a spoon.” John said he never felt it warranted a felony charge and it bothered him.  But he was able to negotiate a lesser charge.

Brennan said he will stand firm in his decisions and be able to be fair and unbiased. “Ten years ago, I would not have had the temperament to do that,” he chuckled.

Brennan is supported by about 12 Sacramento County judges who know of his work and experience. Brennan said he is endorsed by them not because he is their friend but because they know his work.

John Brennan said he will be doing more reaching out to the public during his campaign for judge within these next few months, some in the Davis area.

3 thoughts on “Getting to Know John Brennan, Candidate For Judge”