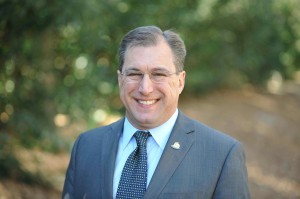 It was last Monday afternoon when word leaked to the Vanguard that Davis Mayor Joe Krovoza would not qualify for the California Assembly ballot due to a snafu in his signatures.  Sources familiar with the situation told the Vanguard that Joe Krovoza’s campaign turned in 45 signatures with his ballot statement to put himself on the ballot as a candidate for the State Assembly.

The 45 signatures were five more than the minimal requirement of 40 signatures in order to qualify for the June primary ballot.  At that time, word was leaking out that seven of those signatures were invalidated, leaving Mr. Krovoza with only 38 valid signatures and thereby leaving him short of qualifying for the ballot.

However, spokespersons for the campaign, while refusing to go on the record, vehemently denied the report.  Based on credible information, the Vanguard held off reporting on this matter until it could positively verify the report one way or another.

By Tuesday morning, the campaign insisted that they had the signatures necessary to qualify for the ballot.

The Fourth Assembly District makes this more tricky than most to ascertain what happened, as it encompasses six counties.

There were two critical dates: on Friday, there would be a list of candidates which complies “with provisions of the Elections Code requiring the Secretary of State to notify each candidate for voter-nominated office of the name, address, occupation designation and party preference of each person having filed for the same office.”

Then on March 27 (which is Thursday), there will be a certified list.  While the list of candidates is “unofficial,” the Vanguard was told that if a candidate appeared on the list, they had turned in the necessary paperwork to qualify. 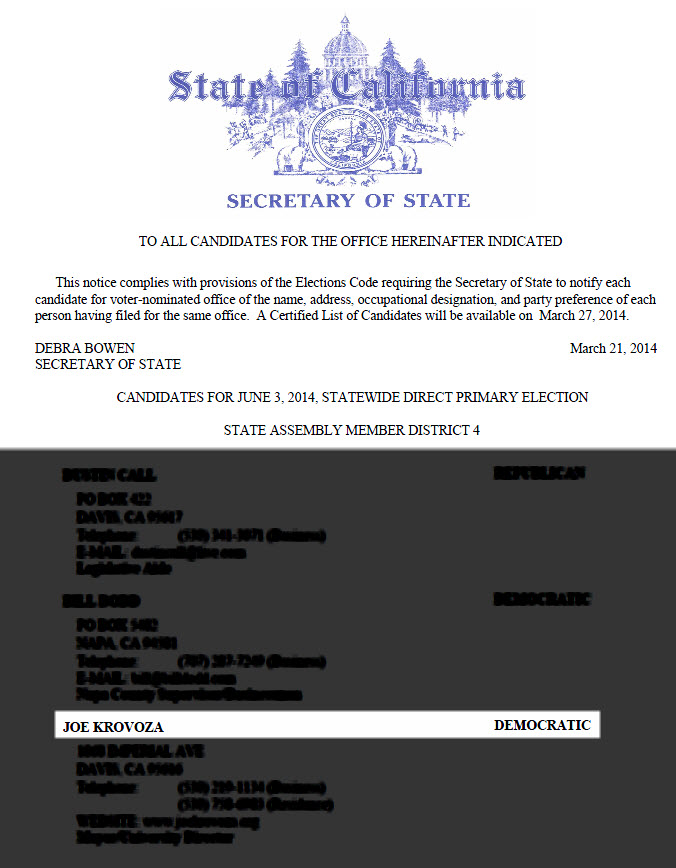 On Friday, toward the end of the day, the list appeared and Mr. Krovoza’s name was on it, demonstrating that his campaign had submitted the necessary paperwork and that he would indeed remain on the ballot.

Mr. Krovoza’s spokesperson declined to comment.  This morning, Mr. Krovoza sent the Vanguard a statement which read, “We submitted enough signatures, that has been confirmed, and we’re on the ballot.  No doubt, lessons were learned, especially in a district where six counties are involved in a filing.”

The Vanguard has since pieced together what had occurred. After the initial verification phase, Mr. Krovoza was three nominators short.  Local elections offices were informed of this shortfall by the Secretary of State and that triggered a reevaluation of the signatures.

Ultimately, three counties would reevaluate the signatures: Lake, Sonoma, and Yolo Counties and determine upon further review that the voters’ signatures were close enough and therefore valid.

It is a strange system and one elections official told the Vanguard that many times signatures are difficult determinations as they tend to change over time.  Also, people will tend to sign official documents, including nomination forms, with a signature that does not look at all like the one on the voter registration form.

Yolo County Elections Official Freddie Oakley spoke to the Vanguard and told the Vanguard that during their review, a signature was originally rejected as unacceptable by one of the workers.

After considerable review by supervisors, they determined, mostly based on the shape of the first letter, that the signatures matched.  Ms. Oakley told the Vanguard, “I think their determination was correct, so that one was back on.”

In Sonoma County, the elections office determined that they had failed to bring up an election card where there legitimately was one.  That brought that signature back in.

Finally, in Lake County there was one more valid signature discovered, as well.

By the beginning of the day on Tuesday, the three counties had amended their count, allowing the Krovoza campaign to have sufficient signatures to qualify for the ballot.

As one official told the Vanguard, the candidate had the option to collect as many as 60 signatures, which would have allowed them, most likely, to avoid this last second drama.  In their experience, candidates are usually advised to collect as many of they can because there are always invalid signatures, people move, they may fail to change their registration between elections, and other glitches occur.

The field of candidates in the 4th Assembly District is now set.  Mr. Krovoza is joined by Democrats Dan Wolk, the Mayor Pro Tem of Davis and Bill Dodd, a Napa County supervisor as well as Republicans Dustin Call, a Legislative Aide from Davis and Retired Marine Officer Charlie Shaupp from Esparto.

2 thoughts on “Krovoza Close Call, How He Nearly Didn’t Qualify For Ballot”