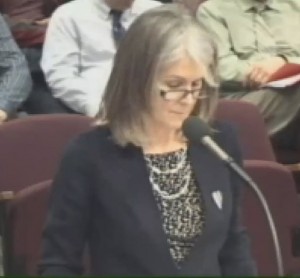 Examination of Documents Show Law Firm Associated with School District’s Attorney Has Investigated Three Complaints Per School Year – Davis residents and Vanguard readers were stunned to learn that an investigation into the cutting of a school board member’s daughter from the Davis High volleyball team ended up consuming nearly 100 hours of time and costing the district $22,000.

Earlier this week, the Vanguard learned that in 2010, the district had spent about $10,000 investigating a complaint that Nancy Peterson, at that time an assistant volleyball coach, was bullying the daughter of former head volleyball coach Leigh Whitmire Choate.

That consumed 48.55 hours and cost $10,679.  The district would ultimately rule that Nancy Peterson did not bully or harass Ms. Choate’s daughter, and ruled in favor of Nancy Peterson.   According to Ms. Choate, the investigator was the same Alexander Sperry who four years later would conduct the investigation of Julie Crawford.

There was immediate community outcry into the perceived wastefulness of the Crawford investigation at a time when the district is not in great footing fiscally.  The Vanguard and apparently other publications have requested a more comprehensive accounting as to the number of internal and external investigations, and the overall cost to the district.

The Vanguard would request a snapshot from 2010 to 2014, which encompassed both of the two known investigations.

“First and foremost, the district has a duty to reasonably investigate all complaints,” they write.  “We take this duty seriously and take proactive steps to resolve the complaint at the lowest level possible. The Board has given staff the direction to bring options for alternative conflict resolution in the goal of strengthening the ability to resolve conflicts at a lower level.”

They note, “Complaints concerning employees may be filed by students (of which there are more than 8,500), parents (more than 12,000), other district employees (more than 1,000), and community members. When the district office receives a complaint concerning an employee, either the Assistant Superintendent of Human Resources and/or the Director of Student Services reviews the complaint.”

One of the big questions that has arisen is who determines how the complaints are handled.  The district answers that question here: “These administrators determine whether to investigate the matter internally or externally.”

That suggests that either the Assistance Superintendent of Human Resources or the Director of Student Services makes the determination.

“That determination is based on several criteria, which include, but are not limited to: the level of the complaint’s complexity; availability and expertise of staff to conduct a timely and thorough investigation; the potential impact(s) on the employee and/or complainant; potential litigation.”

The district writes, “It is the ultimate goal of the Davis Joint Unified School District to ensure academic excellence and fiscal responsibility. The complaint and investigation processes ensure that we maintain the highest standards for our employees. District staff must employ their professional judgment in order to ensure that high standards are maintained, the district complies with its legal and ethical duties while keeping costs as low as possible.”

They note that of the 70 complaints filed at the district office from July 1, 2010 to February 28, 2014, “fifty-nine (59) were investigated and resolved by the Assistant Superintendent of Human Resources and/or the Director of Student Services. Eleven (11) complaints were referred to outside investigators.” 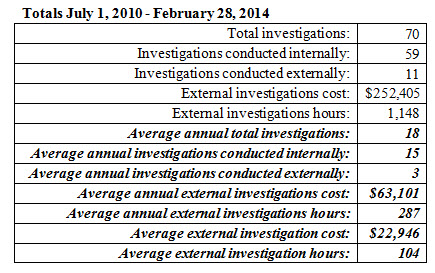 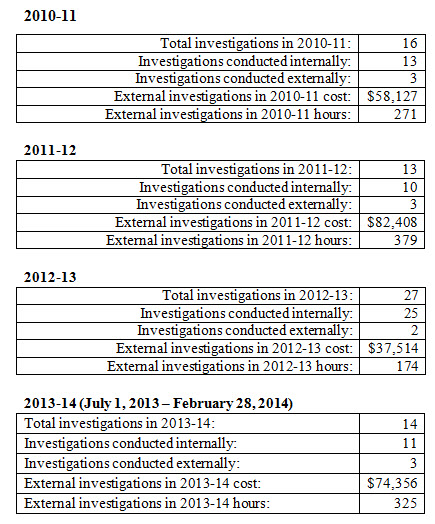 A few points to note from this data.  First, we are limited really to this summary data, which makes further analysis difficult.  We do not know the nature of the other complaints that rose to the level of external investigations.  Clearly, any investigation that is handled in house is less significant in that it does not trigger additional costs.

Third, there is no clear trend.  2011-2012 was thus far the most costly year, but it is worth noting that the period for 2013-14 ended on February 28, meaning that the district had another four months left in the year with already three complaints and $74,356 spent.

One of the questions that arises is how many of these external complaints triggered appeals.  If you recall, the school board does not learn about complaints unless the findings get appealed to them.

If that is the case, there is at least the potential question about oversight by the school board.

There is further troubling information that arises as well. 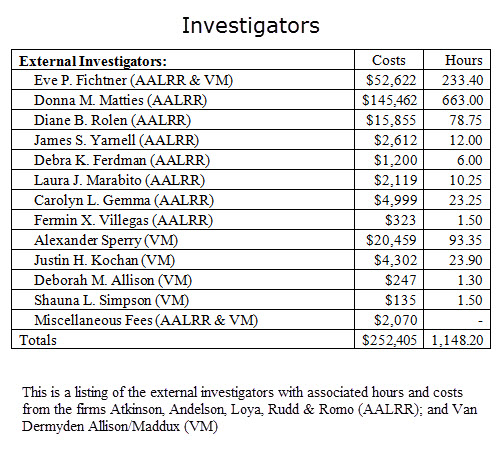 One of the key questions that has not really been answered is how the district selects the investigator.  What we learn is that the district has essentially used two law firms: Atkinson, Andelson, Loya, Rudd & Romo (AALRR); and Van Dermyden Allison/Maddux (VM).

What makes it more intriguing is that the School District’s Attorney Eve Peek Fichtner has actually been employed by both firms.  Ms. Fichtner was Senior Counsel at AALRR from 2000 until September 2013 when she went to Van Dermyden as a Partner in October 2013.

Coincidence?  The pattern suggests that the district simply used their attorney’s firm to conduct the investigation.

Is that a conflict of interest?  Not necessarily.  But the whole set up suggests perhaps something else going on here.  As we know from the most recent investigation, Eve Fichtner herself was one of three attorneys involved in the report.

We also know from the release by the school district that one of the criteria for launching an external investigation is potential litigation.

That means that anyone hired to investigate is potentially hired not to uncover the truth but to reduce the district’s exposure for litigation.

That calls into question the veracity of a report that, as we know, in most possible ways attempted to split the baby.

The finding was that ”more likely than not, Coach Crawford’s decision to cut [Vanguard redaction] Peterson from the varsity volleyball team was influenced, at least in part, by Coach Crawford’s feelings about Nancy Peterson” but also added “at the same time (the investigator) does not find that coach Crawford acted with ‘willful mal-intent’ to harm (the Petersons’ daughter). … Rather, through no fault of her own, (the daughter) simply became a casualty of the ongoing ‘volleyball drama’ involving coach Crawford and Nancy Peterson.”

The school board itself practiced the same, first by a 3-1 vote upholding the findings by the investigator and then six days later, rehiring Julie Crawford for the spring.