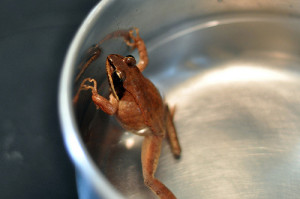 “People don’t pay attention until cities talk about bankruptcy, but by then the frog has already been boiled to death.”

All the while, the politicians aren’t setting aside sufficient funds to pay for the promises they’ve made to the public employees. Does any of this sound familiar?

I’m not here to argue that the city of Davis is destined for municipal bankruptcy, but it certainly isn’t taking sufficient action to avert it. It’s not even clear whether effectively meeting the fiscal emergency is the city’ top priority given everything else our leaders are pursuing.

Whether the city can walk, chew gum and balance a checkbook all at the same time remains to be seen.

There are two aspects to the city’s handling of the fiscal emergency that leave a lot to be desired:

The city is currently projecting an approximately $5 million structural deficit every year for as far as the eye can see. As shocking as this may be, the city is significantly understating the severity of the fiscal crisis.

The $5 million deficit projection is entirely arbitrary, virtually pulled out of thin air. The deficit projection reflects only $2.5 million per year to address the road and bicycle path maintenance backlog when the annual amount required to reduce the backlog is far, far greater.

Why the city has budgeted only $2.5 million in annual maintenance expenditure is a mystery. That figure results in worse roads and bike paths, not better, and a far greater backlog over time.

Furthermore, the $5 million structural deficit does not account for the maintenance backlog for city-owned infrastructure apart from roads and bike paths. What’s the backlog for parks and recreational infrastructure, buildings, lights, street lights, parking lots, etc.? Nobody knows.

How can the voters cast informed votes if they don’t know the extent of the problem? It appears we are destined to vote on a never-ending series of Band-Aid tax measures amounting to a tax version of Chinese water torture.

Even if the city were being fully transparent regarding the extent of the fiscal emergency, and a full range of solutions to deal with it, how would the voters even know about the emergency? Expecting the voters to follow City Council deliberations or media reports does not cut it.

The city knows full well that many voters do not follow regularly follow these matters, i.e., they have “checked out.” Bemoaning the fact that many voters have checked out is not productive. What is productive is to engage in a cutting-edge community outreach and input effort suited to our age, intended to engage the voters. An extraordinary fiscal emergency requires an extraordinary community engagement effort.

Our community deserves to be fully informed, be allowed to weigh a full range of solutions, and to cast informed votes. None of this is currently the case. The voters are not children to be “guided” or “steered” by the city and the politicians in their desired direction. An immediate course correction is in order.

— Michael Bisch is a Davis resident and a commercial property broker.

20 thoughts on “Boiling the Frog”