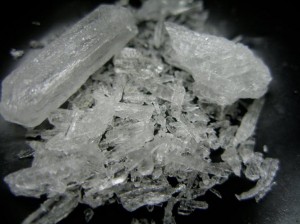 Testimony began yesterday with YONET agent Gary Richter, for the People’s case, in a case against a man who was found with 19 grams of methamphetamine. After a search warrant was served on his place of residence on January 21, Richter took into evidence four separate bags containing four different amounts of methamphetamine. He stated he found no indicia: “There were no pipes, no syringes, needles, or spoon, which would be found with someone who was using.”

Gary Richter, who works for the Yolo County Sheriff’s Office as a case agent, is known for his expertise in possession and sales of methamphetamine. Richter, who has received education from the school of narcotics and has had multiple years of experience dealing with narcotic users, stated that he is able to tell if someone is under the influence of methamphetamine by observing if the user has rotted teeth, bad breath, rings around the nose due to snorting, hyperactivity, as well as needle marks. Jorge Magana, the man in question of being a seller of methamphetamine, had none of these physical symptoms at the time of the search warrant.

Although the physical symptoms of a “typical user” as Gary emphasized were not present during the search warrant, a large amount, 19 grams, of methamphetamine was located in one of the bedrooms at the residence where Magana was staying. Richter stated that these bags were separated into four individual baggies.

Each baggie was separated into different amounts: Bag 1: 7.3 grams, Bag 2: 7.1 grams, Bag 3: 3.6 grams, Bag 4: 1.6 grams. Richter who has had a large amount of experience dealing with users as well as sellers, stated “due to quantity of methamphetamine found, I believe it was used for sale.”

Agent Richter, who has performed multiple search warrants and has arrested multiple users, stated that “users have indicia (tools) in their residence, and there were no ‘tools’ for drug use found in the Magana household [i.e., pipes, syringes], as well as no signs of physical use on members in the household [i.e., track marks, needle marks, burnt up lips/fingertips, etc.].” What was found in the Magana residence during the search warrant, along with the meth, was a large sum of cash adding up to 579 dollars.

When questioned about how much a 19-gram bag of meth may sell for on the street, Richter stated that, “One bag can probably be purchased for $400 to $600.” When asked if there were ATM receipts in the house or car of Magana, Richter stated that there was no evidence of either at the residence of Magana. Richter has purchased methamphetamine as a case agent, and testified that meth is usually bought with cash, and the amount of methamphetamine found at Magana’s residence matched the amount of cash that was found as well.

After a brief lunch break, the defense called upon forensic psychologist Doctor Siggins. This testimony was done in a closed courtroom setting with no jury present, which reason was unclear to the Vanguard but may be due to a motion to dismiss a witness, which may have been filed by the prosecution.

The prosecution’s argument was that the defense did not let the prosecution know until the last minute that Doctor Siggins was even a witness, which was a violation of the evidence code. Deputy Public Defender Teal Dixon stated, “Prosecution does the same thing all the time.”

Doctor Siggins is a family/marriage counselor, as well as a forensic psychologist with expertise in the psychological effects of pharmacological drugs, but has not practiced in over twenty years. Contrary to the testimony of Richter, Simmons testified that sometimes people can take rectal shots of methamphetamine.

He further stated that “methamphetamine users could fall asleep and wake up after using 5 grams of methamphetamines,” which was contrary to what Richter had stated as a “lethal” amount.

The Deputy DA concluded by asking Judge Mock not to allow Siggins to testify in court in front of the jury due to violation of the evidence code. Judge Mock, who sympathized with Dixon’s remark, agreed to allow testimony by Siggins, but he is only allowed to testify within a narrow window of questions.

On April 18, Aquelin Talamantes, Deputy Public Defender Sally Fredericksen, and Deputy District Attorney Ryan Couzens met before the Honorable Stephen Mock. Talamantes is the Davis mother accused of murdering her five-year-old daughter in 2013. Prior to the start of the conference, screams and moans of distress were heard through the department walls. Following the bailiff’s orders, all personnel evacuated the room. Upon re-entering, defendant Talamantes was present alongside Fredericksen and several bailiffs.

The Status Conference was held to settle matters regarding Talamantes’ psychological exams. The prosecutor requested another exam, due to the insufficient information provided by the defendant during the first run of exams. Ms. Fredericksen was arguing for the judge not to permit any further cross-examinations due to her client’s sensitive state. Fredericksen stated that further examining of Talamantes would be detrimental to her already unstable condition. Pressing his case and emphasizing that the data collected by the examinations is highly pertinent to the case, especially in a plea of insanity, Couzens was able to gain Judge Mock’s approval for further exams.

Judge Mock noted that the defendant answered all questions adequately except for the ones that demanded more details of the event and ones that more directly regarded the victim. However, taking into careful consideration the defendant’s mental state, Judge Mock also requested both attorneys to draft a list of appropriate questions to be used in the next evaluation.

Before fully closing the conference, Mr. Couzens handed over collected evidence, consisting of supplemental reports, DVDs and CDs of interviews, to Ms. Fredericksen. The Trial Readiness Conference is to be held on Tuesday May 13 at 9am in Judge Mock’s Department 3, and the trial date is still to be determined.

One thought on “Clash of Expert Witnesses in Drug Case”