On Friday, the Vanguard was tipped off that the firefighters were holding a celebration party for the departure of Davis City Manager Steve Pinkerton. Mr. Pinkerton had implemented a number of reforms such as staffing reductions, redeployment of personnel, boundary drop, and shared management services that the firefighters’ union had fought against last year.

Friday was City Manager Steve Pinkerton’s final day as Davis City Manager. He was hired by Incline Village back in February to be the General Manager there. And on Monday, Gene Rogers will officially begin work as Interim City Manager.

The Vanguard received a message: “I assume that you are aware of the celebration party called by Bobby at Vito’s Pizza for this evening, celebrating Steve’s departure. I have been told that some elected officials and some seeking a city council seat have been invited as well. Other invitees include members of the other City bargaining groups. Just thought you should be aware.”

The Vanguard has acquired a copy of the invite sent out on April 9 by PASEA (Program, Administrative and Support Employees Association) President Sara Williams, who posted on the PASEA Members Google Group: “Hi all, Just wanted to pass along to all of you that Bobby Weist from the Fire Department is going to host a get together (pizza, etc.) at Uncle Vito’s in Davis (524 2nd Street) on 4/25 @ 4:00 pm to celebrate the departure of our City Manager. If any of you are interested in attending, please e-mail me back so that I can [give] Bobby a head count.”

This is one example of the emails that were going around to at least the firefighters and PASEA. The Vanguard was tipped off to this after a number of employees complained that the event was in poor taste. 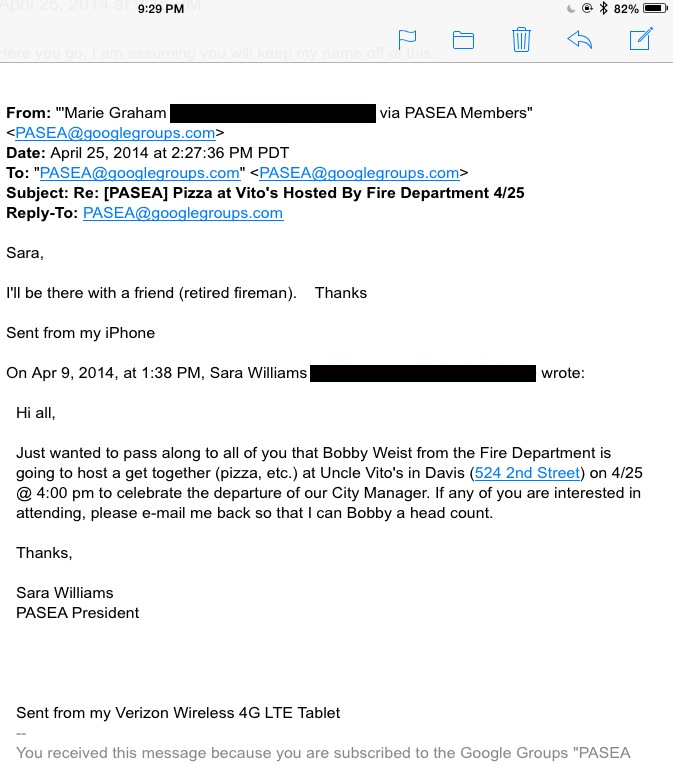 The Vanguard arrived around 4:30. As the clock reached the final seconds before 5:00, there was a loud audible countdown of “5-4-3-2-1” that was proceeded by a loud cheering, indicating that 5 pm had arrived.

In addition to about a dozen firefighters and some other employee groups – the number of people never topped 20 or 30 at any point in time – a number of elected officials came to the celebration, each one walking up to union president Bobby Weist and making the rounds.

Some who attended indicated that they had no idea of the purpose of the gathering and believed it was an informal coming together of people there to drink beer after work.

One person indicated they were invited by Bobby Weist to come meet some current and former staff. They were a bit confused by the countdown and cheer.

Councilmember Lucas Frerichs has sent the Vanguard a statement.

“I was invited to Uncle Vito’s to have a beer and meet city employees – many of whom I’d not had the chance to meet previously. I was told in advance that the purpose for the gathering was “to get all the city labor groups together to start working together because Pinkerton is leaving,” Councilmember Frerichs stated.

He added, “I arrived at Vito’s just before 6pm after attending the DavisRoots Demo Day event downtown that ran from 4:30-6pm. As I understand from the VG report there was some countdown/cheer at 5 pm, and I was certainly not present…again, arriving at approx. 5:55pm.”

Councilmember Frerichs continued, “I’m curious as to why the DV is also not reporting/highlighting the going away party/gathering in honor of Steve Pinkerton which took place the day before (Thursday24th), at another downtown restaurant, that DV and I both attended. I, and others, found it quite noticeable that only 2 councilmembers were present at that event – to say goodbye to Steve, thank him, and wish him well in IV….but no breaking VG story? Seems newsworthy to me.”

Neither Dan Wolk nor Don Saylor responded to Vanguard queries.

Back in November, the Vanguard learned of efforts by Bobby Weist to try to get Mayor Pro Tem Wolk and Councilmember Lucas Frerichs to fire Steve Pinkerton.

There was a special closed door session in November prior to Thanksgiving, regarding Mr. Pinkerton’s performance review.

In September, the Vanguard learned from many sources that the Davis Professional Firefighters Association President Bobby Weist was telling people that he had three votes on council and that Mr. Pinkerton would be fired by December.

At the same time, at least one councilmember told the Vanguard directly that they were approached by a contact on behalf of Mr. Weist, asking them to join with two other councilmembers at that time to terminate the contract of Mr. Pinkerton.  That councilmember indicated that they were not inclined to join that effort.

However, despite the claims of Mr. Weist to members of the public, the Vanguard was told by at least three councilmembers that they had no intention of firing Mr. Pinkerton.

The Vanguard learned at that time, by sources who opted not to go on the record, that there was an active effort to fire the city manager.  That said, there were not believed to be the votes to do so. These sources told the Vanguard back in November that Bobby Weist had been vocally telling people he had the votes to fire Steve Pinkerton.

While the effort to fire Mr. Pinkerton failed, Mr. Pinkerton took advantage of an opportunity to leave, and in February agreed to terms with Incline Village. He gave the city of Davis two and a half months to find an interim and Friday was his last day.