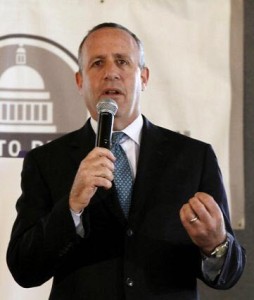 The investment strategy, unveiled at a Capitol press conference, dedicates a permanent source of funding for affordable housing in sustainable communities, mass transit, and offers a guaranteed catalyst for job-creation as California’s economy continues its recovery, according to a release from Senator Steinberg’s office.

“Cap-and-Trade needs a long-term strategy that maximizes the efficiency of its revenues as we seek to curb greenhouse gasses. I am thrilled to stand with a broad coalition of good environmental stewards, advocates for social justice, experts in transit-oriented development, and the working men and women of California,” Senator Steinberg said. “This strategy is designed to achieve the objectives of AB32 through significant reductions in greenhouse gas and the direction of public and private investment to California’s low-income and disadvantaged communities, which are disproportionately burdened by air pollution and the effects of climate change.”

Significantly, the League of California Cities released a statement joining the Senator President Pro Tem and announcing that cities would benefit in multiple ways.

“Sen. Steinberg’s proposal could provide critical funding to high priority city projects such as transit, local streets and roads and developing affordable housing in locations close to jobs and shopping that can all contribute to greenhouse gas reduction,” said Chris McKenzie, Executive Director of the League in a prepared statement.

He added, “When California enacted SB 375 in 2008, it was with the understanding that funding for the program would soon follow. While the recession imposed severe budget constraints on the state, we appreciate the Senator’s efforts now to develop these important funding resources. The League supports this proposal in concept and we look forward to working with the Senator and Legislature as the details of the legislation are developed.”

Both sustainable affordable housing and mass transit, key to achieving the goals of California’s Global Warming Solutions Act (AB32 of 2006), are already facing a catastrophic funding crisis, according to Senator Steinberg’s office.

“The strategy ensures that California’s suite of climate policies, taken as a whole, provides a net benefit to disadvantaged and low-income communities as California reduces greenhouse gas emissions, goals that were heavily-endorsed by voters with their rejection of Proposition 23 in 2010,” stated the release.

In addition to permanent funding sources for affordable housing and mass transit, the strategy “also provides a permanent source of funding for highway and road rehabilitation to improve traffic flows and repair, to retrofit streets for cycle-lanes, and for the Governor’s High Speed Rail project, which is projected to reduce heavy emissions generated by air and road travel. Senator Steinberg’s proposed strategy identifies funding for green infrastructure projects and clean-vehicle programs, seed funds to assist clean projects, and rebates for consumers.”

In an address before the Sacramento Press Club on February 19, Senator Steinberg proposed swapping Cap-and-Trade’s forthcoming expansion into the non-stationary fuels market for a direct Carbon Tax on those same fuels, while returning most of the revenues to low- and middle- income families through a tax credit, and a permanent source of funding for transit.

Here are some of the key proposals:

Affordable Housing
With bond funding exhausted and redevelopment funds eliminated by a California court, California has virtually no state investment in affordable homes while rents were higher in 2012 than they were at the height of the housing boom. The proposed strategy creates a permanent source of funding for affordable housing.

In a joint-statement from Ray Pearl of the California Housing Consortium, and Shamus Roller of Housing California, the affordable housing advocates said “California’s affordable housing community applauds Senate President pro Tem Steinberg for prioritizing much-needed commitment to state investment in developing affordable homes that create jobs while helping our state meet its goals to reduce greenhouse gas emissions through AB 32. This proposal would bring much-needed investment to build homes close to transit centers, and is welcome news particularly for the state’s urban areas. We call on California’s elected leaders to make this proposal the starting point for a comprehensive statewide funding strategy to increase the supply of affordable homes in communities across the state, create jobs, reduce homelessness, and improve health and educational outcomes.”

Smart Growth
The strategy proposes investments in affordable housing be centered in sustainable communities, illustrated by MacArthur Station, a mixed-use transit-oriented development in Oakland, California, designed to redevelop and revitalize a transit-oriented community that enhances bicycle and pedestrian use, with increased access to BART and connecting public transit lines.

“Senator Steinberg’s proposed investments will lead to cleaner, healthier communities. These are also investments in equity so that Californians at all economic levels will benefit” said Tom Adams, an environmental activist and retired environmental lawyer, adding “Under Senator Steinberg’s proposals, California will set another milestone for global leadership on clean energy and climate. Over at the circus of the climate deniers the carnival barkers say climate policy will result in hardship. Senator Steinberg, on the other hand, is showing that sound climate policy means rebuilding our cities, creating jobs, improving transportation and increasing social equity.”

Mass Transit
Also true to Senator Steinberg’s February proposal is a commitment to provide a permanent source of funding for mass transit and develop 21st Century infrastructure for California to reduce traffic and their polluting emissions. The state’s road users are collectively on course to travel 1.1 billion miles daily by 2020, an increase of over 100 million miles traveled daily over the next six years.

Joshua Shaw, Executive Director of the California Transit Association said, “Senator Steinberg’s plan builds upon the foundation laid by Governor Brown, by confirming that public transit is not simply a discretionary service; it is essential – and becoming increasingly more vital to the health and well-being of our state.”

Tens of Thousands of New Jobs
A standard assessment used by Federal and State government projects that for every $1 billion invested in transportation projects, 17,000 jobs are created. Conversely, a study by the Economic Development Research Corporation projects that congestion threatens 480,000 jobs representing $32 billion per year in income by 2040.

“The California Alliance for Jobs supports the concepts contained in Senator Steinberg’s Cap and Trade Long Term Investment Plan” said Jim Earp, Executive Director of California Alliance for Jobs, and “By making investments in transportation projects that reduce greenhouse gas emissions, California will continue its leadership role in addressing climate change while also creating thousands of skilled construction jobs building new transit lines, infill projects, and improving streets and roads that service transit corridors and alternative modes of transportation. We believe that while this is a significant step forward, there is still considerable work ahead to flesh out a proposal with many moving parts into a viable bill. We welcome the opportunity to continue to work with Senator Steinberg over the coming weeks and applaud his leadership on this critical issue.”

The League of California cities also highlighted their own keys.

After an allocation of $610 million to programs described in the second set of bullets, an estimated $3 to $5 billion would be allocated as follows beginning in FY 2015–16:

$610 million would be allocated annually to the following programs:

“Funding would be subject to a competitive ranking process within individual funding categories to ensure maximum reduction of greenhouse gas emissions,” the League stated. “The proposal unveiled today would also meet all existing constitutional and statutory requirements for use and allocation of Cap and Trade funds, including SB 535 (deLeon, 2011) that requires 25 percent of all Cap and Trade funds be spent to the benefit of disadvantaged communities and SB 1018 (Budget Committee, 2012) that requires careful documentation and justification of expenditures of funds to protect against lawsuits.”

The program works by establishing a hard cap on about 85 percent of the total statewide greenhouse gas emissions. This includes industries like mining, oil production and energy production, manufacturing plants, transportation fuels and others.

The California Air Resources Board  issues emission “allowances” equal to the total amount of allowable emissions over a given compliance period. Entities that are regulated under the program are able to “trade” or buy and sell a portion of these allowances. Each allowance is equal to one ton of greenhouse gases.  As the overall cap declines, fewer allowances will be available.

Here is a portion of Senator Steinberg’s Sacramento Press Club speech from February: