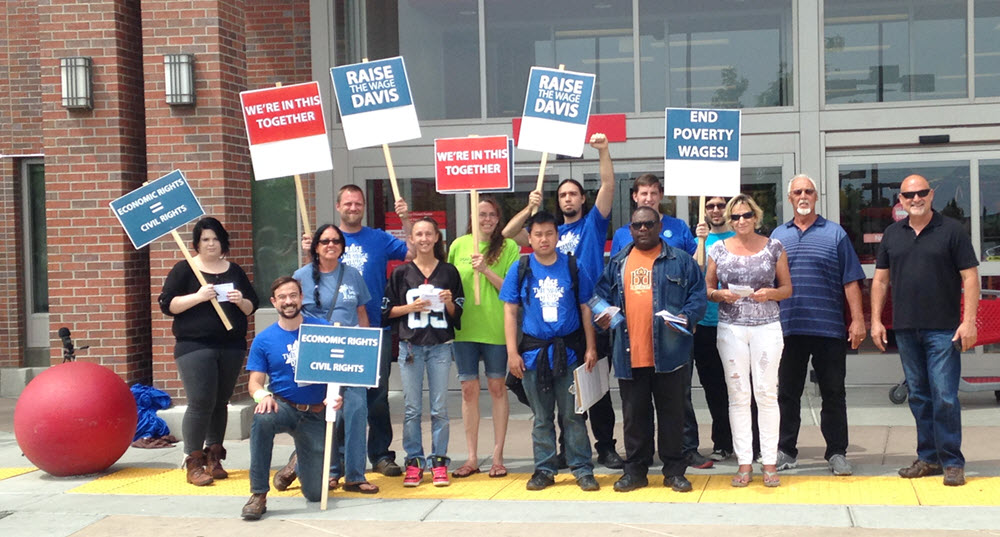 About twenty organizers and union workers protested on Thursday outside of the Target Store on Second Street in Davis. They held signs, chanted, and approached and educated customers about Target policies and the $15/hour minimum wage campaign in Davis.

In its Facebook message, it stated, “Target does not want to pay its workers a decent wage. It would rather spend its money on bigoted politicians like Michele Bachman.”

They noted, “Two weeks ago, Target management threatened to call the police to remove our petitioners from their storefront. In the past, Target has permitted people to gather signatures at this store front. Target management does not want a living wage for its employees. It’s time to show them that low pay is not OK!”

Organizer Bernie Goldsmith told the Vanguard that the incident two weeks ago was one of the developments that prompted the protest as a show of support for petitioners who were in a vulnerable position.

For their part, the Target store sent out a representative to let the organizers know that they should not obstruct or disrupt customers’ shopping experience. 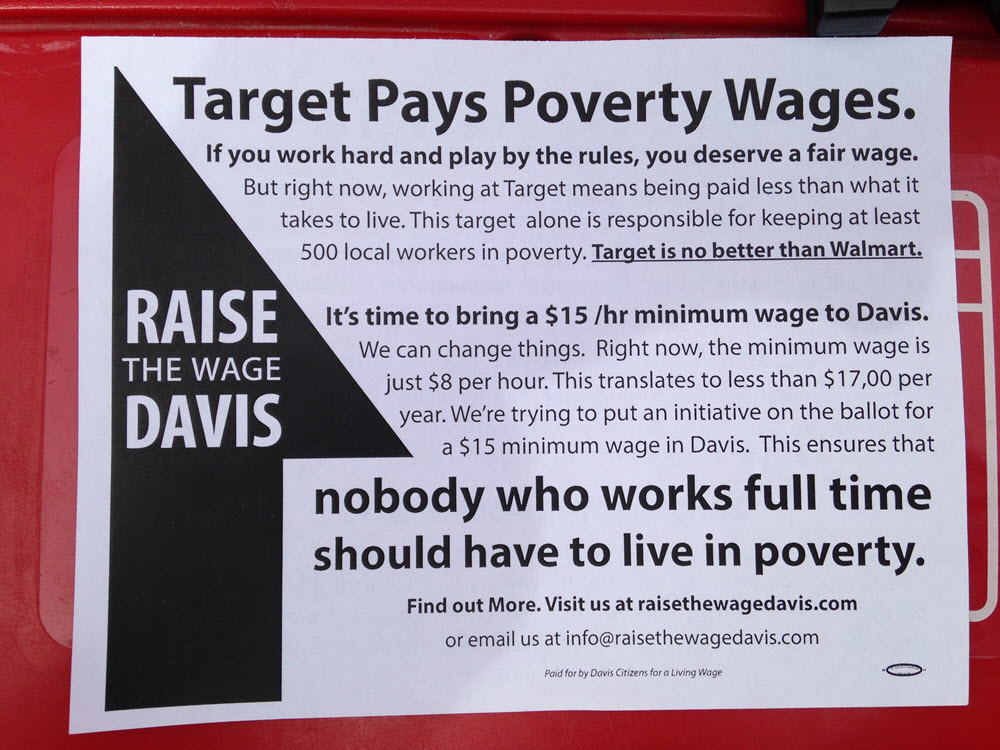 They handed out leaflets stating, “Target Pays Poverty Wages.” It continued, “If you work hard and play by the rules, you deserve a fair wage. But right now, working at Target means being paid less than what it takes to live. This Target alone is responsible for keeping at least 500 local workers in poverty. Target is no better than Walmart.”

The leaflet continues, “It’s time to bring a $15/hr minimum wage to Davis. We can change things. Right now, the minimum wage is just $8 per hour. This translates to less than $17,000 per year. We’re trying to put an initiative on ballot for a $15 minimum wage in Davis. This ensures that nobody who works full time should have to live in poverty.”

The organizers need to get 20% of all registered voters, about 7000 signatures, by May 1. 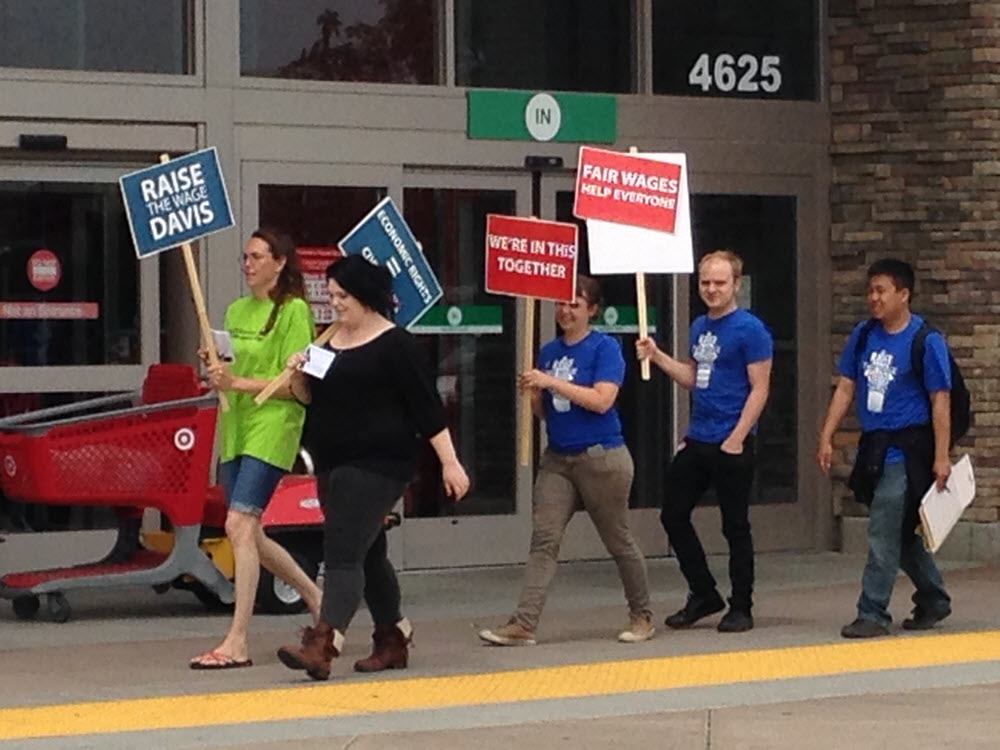 Their notice of intention to sign the petition states their reason, “Someone who works hard and plays by the rules deserves a fair wage. Our current minimum wage subjects workers in our city to economic hardship, sacrifice, and dependence.”

“At a time when our workforce has never been more productive and profitable, we expect our low wage workers to take multiple jobs, be subject to uncertain schedules, and work without health or retirement benefits,” they write. “They are paid so little that they can maintain no hope of improvement. They must rely on government and community resources to make ends meet. Those who work hard for a legal wage should be paid enough to support themselves in comfort and dignity.”

They add, “Furthermore, decades of research has shown that increasing the minimum wage improves the economic climate and the health of small businesses. Providing workers with fairer wages and economic security does not significantly impact the number of jobs. Therefore, we propose an increase in the minimum wage in Davis, implemented in stepwise fashion, to reach $15 by January 1, 2016. It’s smart, fair, and overdue.” 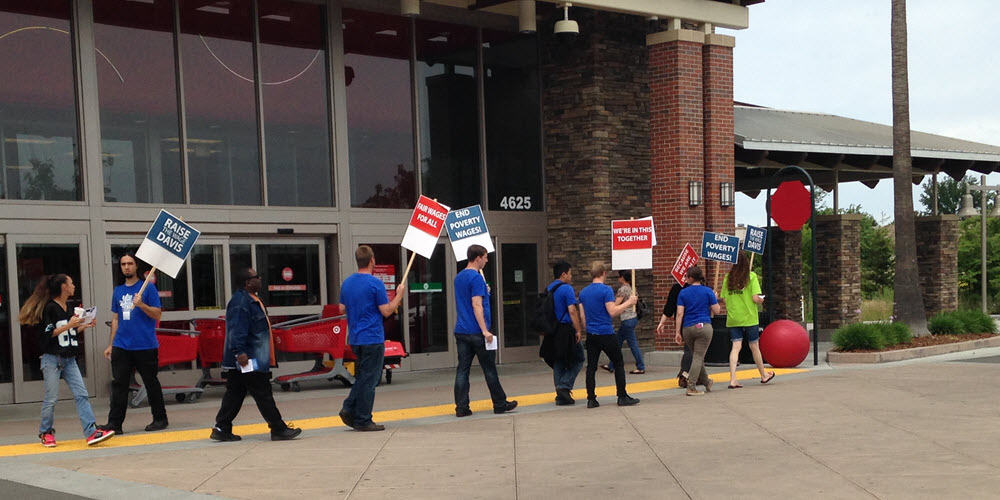 They write, “The state minimum wage has not kept pace with cost of living in California, including in the City,” “worker productivity has dramatically increased during the same period of time that the purchasing power of the state minimum wage has declined,” and “families and workers in the City need to earn a living wage and public policies which help achieve that goal are beneficial.”

The Enterprise this weekend in an editorial argues that “Davis businesses should not be saddled with a $15 minimum wage,” and that “good intentions don’t fund the payroll.”

The Enterprise notes, “If it lands on the June ballot, and gets approved by Davis voters, the measure would set the minimum wage at $11 an hour in January 2015, $13 in July 2015 and $15 at the start of 2016. At that point, the minimum wage would be 50 percent higher than the state rate of $10, with further increases linked to inflation.”

The organizers were originally looking to land it on the November ballot.

Kari Fry of the Centaur Group wrote a letter, claiming to be in favor of minimum wage “increases that are already scheduled by the state of California and proposed by the president of the United States.”  But she writes, “I do not support a localized minimum wage that inevitably will put our community at an economic disadvantage.”

She writes, “I do not support the $15-per-hour minimum wage initiative petition that is being circulated and my company has not and will not provide any services to the organizers of that initiative.”

She adds, “I have spoken with several of my fellow small business owners (some of whom are my clients) and they are, without exception, fearful that they will have to close their doors, lay off employees and/or drastically increase prices if the minimum wage is almost doubled in the course of one year.”

In addition, she argues, “The issue of livable wages is macro-economic in scale, but this proposed initiative does not recognize the unintended consequences on our small community.”  She further argues, “This topic has lacked the necessary community dialogue and thorough research that is a hallmark of the Davis political process.”

Here are two short video clips from the protest:

168 thoughts on “Minimum Wage Organizers Protest Outside of Target”