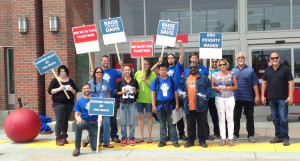 The Question is How Much and How Long a Ramp Up – The push to put a $15/ hour minimum wage ordinance on the ballot was a bold move, that generated a lot of controversy and concern. But it has also sparked, for the first time since 2006, a real discussion in this community about what a living wage is and how much it should be.

It seems unlikely that there will be a ballot measure for November, with the May 1 deadline rapidly approaching. The organizers are suggesting that 2015 is a more reasonable target date, and that gives us a change to recast the discussion.

While we agree with the overall premise of the Raise the Wage Davis folks, we believe that the discussion should focus on what a living wage needs to be, how long we should reasonably take to get there, and how we can keep the wages at a more constant level.

The raise the wage campaigners give us a starting point for discussion, proposing an increase to $15 an hour with a brief ramp up period. Naturally, business interests look at these figures and cringe. They see huge increases in costs, leading to layoffs and business closures.

From our standpoint, we need to be able to scientifically analyze what a living wage is, how much it should be, and how long we need to take to get there. 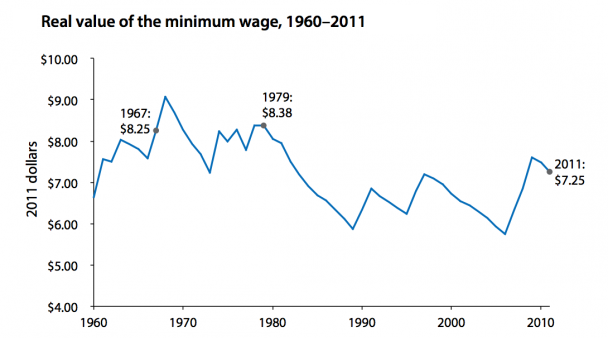 If you look at federal minimum wage in terms of constant dollars, you see pretty clearly that, while the real value is punctuated by periodic wage increases, for the most part the value of minimum wage has declined over time.

That leads to the first point, that any new minimum wage policy should create a target goal and then have a built in annual inflator. Such an inflator would actually help employees who would not see their wages decline in real terms, and it would also benefit employers who would not have to see periodic spikes in wage increases, instead seeing wages increase 1 to 3 percent annually depending on the measure of inflation that the wages are tied to.

That leads us to a second point, which is that raising the wage immediately to $15 might be problematic from the perspective of employers. So, perhaps a better approach is to more slowly ramp up the wage increases, in increments that businesses could better absorb into their expenses. What if we ramped up those wages not over a year or two, but over ten years?

Proponents argue, “It’s time to bring a $15/hr minimum wage to Davis. We can change things. Right now, the minimum wage is just $8 per hour. This translates to less than $17,000 per year. We’re trying to put an initiative on ballot for a $15 minimum wage in Davis. This ensures that nobody who works full time should have to live in poverty.”

The Pew Research Center last summer found “not very many people earn minimum wage, and they make up a smaller share of the workforce than they used to.”

They cited data from the Bureau of Labor Statistics that found that “1.566 million hourly workers earned the federal minimum of $7.25 an hour; nearly two million more earned less than that because they fell under one of several exemptions (tipped employees, full-time students, certain disabled workers and others), for a total of 3.55 million hourly workers at or below the federal minimum.”

People at or below the federal minimum are: 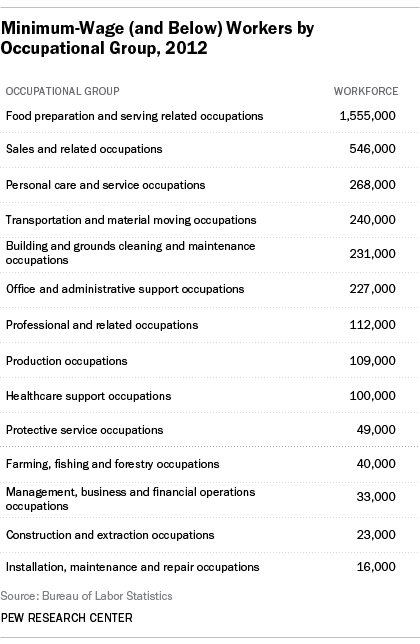 However, that analysis understates the impact of raising minimum wage to $15, because there are a lot of people, in between the current minimum wage rate in California of $8 (which goes up to $9 on July 1 of this year, and $10 on January 1, 2016) and $15, who are not now classified as earning minimum wage.

Nevertheless, legislative data suggests that 90% of minimum wage workers in California are over 20, while 2.4 million of the state’s children live in households who earn minimum wage.

The argument has been posed that we perhaps should discount the poverty level wages because most families are not living on minimum wages. But not so fast. First, about if 2.4 million of the state’s children live in minimum wage earning households, that is more than a quarter of the 9.3 million children in the state.

Second, why are we discounting students making minimum wage? Given the costs of college tuition soaring in recent years, we have an epidemic of students saddled with huge student loan debts – the ability of those students to earn more in wages should not be so easily discounted.

Another issue is whether a city should be the one making minimum wage laws.

As we have noted, Kari Fry in her letter claims to be in favor of minimum wage “increases that are already scheduled by the state of California and proposed by the president of the United States.”  But she writes, “I do not support a localized minimum wage that inevitably will put our community at an economic disadvantage.”

The Enterprise in their editorial writes, “Oh, and while we’re at it: We oppose a city-by-city approach to the minimum wage. The state is the appropriate place for this change to occur.”

While that may not be an unreasonable position, it does ignore an interesting factor, California is almost as diverse as the United States. We have a federal minimum wage which sets the overall floor for wages and states are free to go higher.

Why should the same principle not apply within the state of California? It is not like all communities in California cost the same to live in. So if someone makes a given wage in Dixon or Woodland they have better purchasing power than someone who makes the same wage in Davis. So why not allow minimum wage laws to account for local preference and conditions?

The real question is whether a minimum wage ramp up can be structured in such a way that workers get an increased bang for their buck while not creating the conditions that lead to layoffs and business closures.

It is a fine line and the best solution is to figure out where that line should be drawn. To do that, we need to get empirical researchers into the room with activists and business interests, and, hopefully then, we can create a solution that meets everyone’s needs.