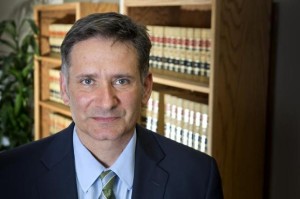 Todd Leras is one of three candidates seeking to replace the outgoing Sacramento District Attorney, Jan Scully. On Saturday he spoke at the United Latinos Voter Forum on the Sacramento State University Campus.

He noted the support he has from Former Supreme Court Justice Cruz Reynoso, and called out two issues that separate him from his two opponents.

The topic of officer involved shooting has been a hot button one in the race.

“One of the reasons it meant so much for me to have Justice Reynoso’s endorsement is because of his work in the Reynoso Commission on the Luis Gutierrez shooting in Yolo County,” he said. He said that a district attorney cannot come into an investigation into an officer involved shooting with a preset notion. “My view is that the District Attorney is in a quasi-judicial position (and) should be evaluating and considering all relevant evidence and making a decision only after all relevant evidence is in.”

He said that he is from Sonoma County and mentioned his concerns about the investigation into the shooting of 12-year-old Andy Lopez, shot by sheriff’s deputies. “If that process isn’t fair, if it doesn’t have any integrity, then I could promise you if I were the DA, I would always look at these things fairly and only make decisions after all evidence has been considered,” he said.

In 2009, the Attorney General’s office reviewed the report by the DA’s office on the Gutierrez shooting that concluded, “When considering all of the facts and circumstances known to them at the time, the use of deadly force by the deputies was objectively reasonable and justified and therefore does not warrant the filing of criminal charges against Sgt. Johnson, Deputy Oviedo or Deputy Bautista.”

That letter was signed by Maggy Krell, who is also a candidate for the Sacramento District Attorney position.

“If you read the Yolo County report on the Gutierrez shooting, they bent every single fact they could to justify what the officers did,” Todd Leras stated. “When I saw that Ms. Krell had reviewed that shooting, I went back, I read the report, immediately I looked at it and said they were relying on a confidential jailhouse informant primarily to justify what the officers did.”

The informant, Rudolfo Flores, never saw the incident but allegedly told DA investigators that Mr. Gutierrez was a “good knife thrower.”  “According to Flores, the deputy was lucky not to get killed because Gutierrez, who is a Sureño gang member, is a dangerous person and had said he would not let the cops take him.”

Furthermore, the report stated, “Flores advised he knew Gutierrez (Navarro) as a Sureño because since he (Flores) associates with Sureños. Gutierrez always carried a knife and was good with it.  Gutierrez’s nickname was ‘Indio’ because he was good with a knife. Flores knew Gutierrez used controlled substances and was considered dangerous.”

“This is what they used to justify and say that this was a lawful killing,” Mr. Leras stated. “Now as an experienced prosecutor, whose prosecuted murderers, rapists, child molesters for over 20 years… I look and I say wait a minute, if I were cross-examining that person as a witness, I would want to know some things that are significant facts.”

He suggested it was important to know who they were, what they were charged with, and what did they get for what they said, and did they corroborate the information.

“That was never done,” Mr. Leras stated. “It wasn’t done by Yolo and when Ms. Krell reviewed it, she never did it either.”

Ms. Krell did not come to the event on Saturday to speak or answer the questions posed by the audience.

The Sacramento Bee editorial board posed questions to the three candidates.

Maggy Krell, is a deputy attorney general and a Democrat

Ms. Krell responded, “I support the death penalty in the most extreme cases. I would make the decision after discussion with victim’s family, law enforcement and the defense. I’d ask for any information they could tell me about the defendant’s background. We want to use this as infrequently as possible. We want to be talked out of this. But it is the law and I would be willing to enforce it.”

The Bee asked, “How would you handle public corruption, and would you prosecute legislators who claim to live in their districts but don’t?”

Ms. Krell responded, “I see a need to be setting up a task force with the Fair Political Practices Commission. … Residency issues certainly have been in the news with Sen. Roderick Wright’s case. It is a violation of criminal law that could wind up in the district attorney’s office and we’d have to evaluate. I really don’t know enough (about the Pan matter). I saw what was in The Bee. If there is nothing new, I don’t know that it would be reopened. I don’t know enough to give you an informed answer.”

Mr. Leras responded, “Officer-involved shooting review is one of the most important issues in the district attorney’s race. The vast majority of officers are honest and completely above board. But to say over the course of 20 years we’ve never had a shooting that raises serious questions is troublesome.”

Anne Marie Schubert is the hand-chosen successor for Ms. Scully and the only Republican in the race.

Ms. Schubert responded, “Obviously Californians rejected Proposition 34, which would have abolished the death penalty. I’m not offended by a jury making a decision in any way that this person should or should not get it. I feel if somebody walks into a downtown theater and blows away 20 kids, it should be an option for juries.”

She added, “I think it’s broken now. I’m absolutely adamant, if we don’t fix it in next couple of years, quite frankly I don’t blame the voters for getting rid of it.”

She responded, “I would fully restore and send district attorney investigators to the scenes of shootings.”

Here is the video of Todd Leras’ speech: