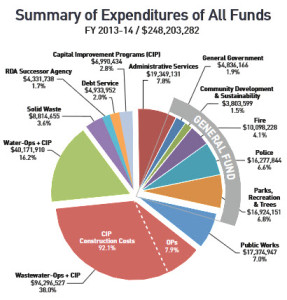 In Bob Dunning’s column this morning, he accuses the city of Davis of breaking the law, calling an insert placed into the public’s April 2014 utility bills a “campaign piece.”

Mr. Dunning writes, “It’s no surprise that city officials want us to vote ‘yes’ in June on the proposed half-percent sales tax increase that is mistakenly being billed as a half-cent sales tax increase.”  He continues, “As such, members of the Davis City Council are free to write op-eds or letters to the editor or one-sided ballot arguments or offer their opinions at forums, coffees and neighborhood gatherings. They can even send out glossy, full-color brochures if they wish.”

“The only thing they can’t do is spend your dime or my dime on such activities,” he writes.  Mr. Dunning uses someone named Bill as a surrogate here, arguing, “The city’s mailing may violate Fair Political Practices Commission rules against using public money to advocate for ballot measures.”

Mr. Dunning continues, “In other words, while the city is free to use public dollars to send out basic information, it can’t advocate on one side or the other for something that people will be voting on.”

We have been through this issue before – as long as the city or any government agency does not state, Vote Yes on Measure O, there is no violation.

Mr. Dunning argues, “One of the measuring sticks the FPPC uses in determining whether a public agency has stepped over the legal line is the use of ‘argumentative’ language.”  He then writes, “For my money, given that we’re within two months of an election, any mailing from the city detailing what will or won’t happen if Measure O does or doesn’t pass is highly suspect.”

But notice that Bob Dunning shifts from the legal line (without citing policy or case law) to arguing his own point of view.  Recall that during the Measure I campaign he was certain that courts would throw out the rate structure on the basis of his analysis, while Judge Dan Maguire specifically pointed out the flaws of Mr. Dunning’s analysis.

Mr. Dunning then goes on to argue, “If city officials wish to convince us that Davis will become Woodland if we don’t vote ‘yes’ on Measure O, they should form a campaign committee, solicit donations and send out as many doom-and-gloom scenarios as they wish.”

Believe they have done that.  But the question here is whether the city has an obligation to educate the citizens on the facts.

Mr. Dunning counters, “While the city will no doubt claim the mailer deals simply in facts, many of those ‘facts’ scream for a rebuttal from those who oppose this measure.” 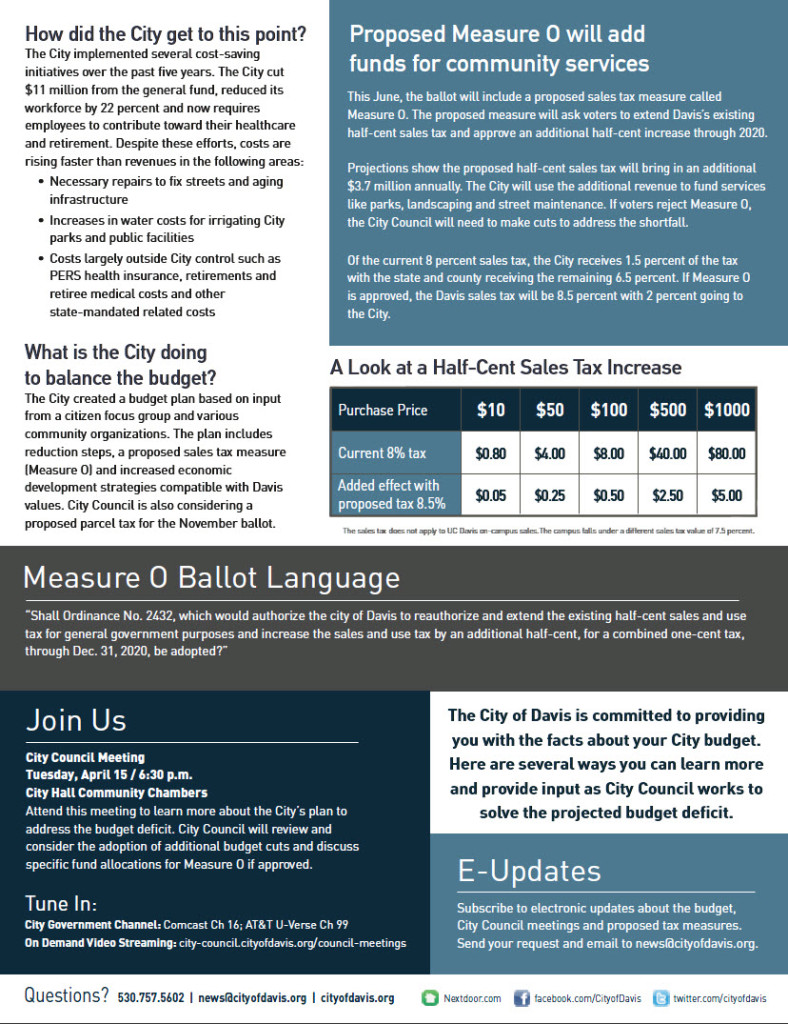 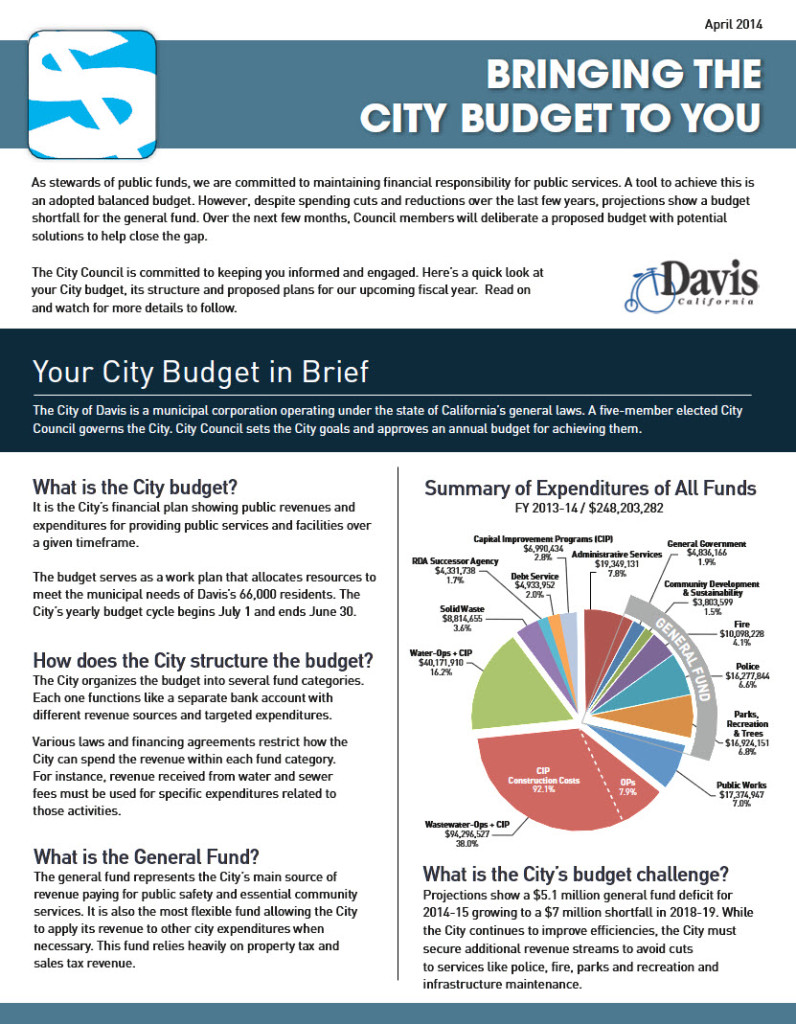 The city’s piece notes, “As stewards of public funds, we are committed to maintaining financial responsibility for public services. A tool to achieve this is an adopted balanced budget. However, despite spending cuts and reductions over the last few years, projections show a budget shortfall for the general fund. Over the next few months, Council members will deliberate a proposed budget with potential solutions to help close the gap.”

These are all facts – the city has a budget shortfall and this past week council deliberated on what the budget cuts might look like, with the tax measure passing and without.

The city then explains what the budget is, how it is structured, and what the general fund is.

Finally, it discusses what the budget challenge is.  They write, “What is the City’s budget challenge? Projections show a $5.1 million general fund deficit for 2014-15 growing to a $7 million shortfall in 2018-19. While the City continues to improve efficiencies, the City must secure additional revenue streams to avoid cuts to services like police, fire, parks and recreation and infrastructure maintenance.”

That is a statement of fact.  The city is not allowed to run a deficit so they either must secure additional revenue streams or they must make cuts.

The city then explains how it got to this point where we need to cut.

Next they talk about what the city is doing to balance the budget.  “The City created a budget plan based on input from a citizen focus group and various community organizations. The plan includes reduction steps, a proposed sales tax measure (Measure O) and increased economic development strategies compatible with Davis values. City Council is also considering a proposed parcel tax for the November ballot.”

Here they told the residents what the city is proposing.  That proposal includes Measure O.  Nowhere do they tell the voters they should or they have to vote for Measure O.

Finally, the city provides the language of Measure O and presents the facts for what Measure O will do.

They write: “This June, the ballot will include a proposed sales tax measure called Measure O. The proposed measure will ask voters to extend Davis’s existing half-cent sales tax and approve an additional half-cent increase through 2020.

“Projections show the proposed half-cent sales tax will bring in an additional $3.7 million annually. The City will use the additional revenue to fund services like parks, landscaping and street maintenance. If voters reject Measure O, the City Council will need to make cuts to address the shortfall.

“Of the current 8 percent sales tax, the City receives 1.5 percent of the tax with the state and county receiving the remaining 6.5 percent. If Measure O is approved, the Davis sales tax will be 8.5 percent with 2 percent going to the City.”

Nowhere here does the city say vote for Measure O, all they do is explain the shortfall, explain what Measure O does, and explain what will happen if it does not pass.  This is almost by the books.

Bottom line is that the city has the right to do that, and anyone who attempts to challenge them will be smacked down by a court of law.

The concerning thing here is that basically Mr. Dunning is arguing that any attempt to inform the public at this stage of the process is suspect.    Again, as he argues, “For my money, given that we’re within two months of an election, any mailing from the city detailing what will or won’t happen if Measure O does or doesn’t pass is highly suspect.”

That’s certainly not the legal standard.  The city has not only the right to educate the public, but the obligation.

For my money, Mr. Dunning has every right to complain about the city using its resources to educate the public on the fiscal crisis because he has done such yeoman work in doing it himself.  After all, he has presented us column after column highlighting the dangers of runaway labor costs, the influence of the firefighters’ union, and long term costs implications of unfunded liabilities for pensions and retiree health.

Oh wait, that was Rich Rifkin.  I do not actually recall Bob Dunning writing anything on these problems.  A google search for Bob Dunning and unfunded liabilities turned up nothing that he had written on the matter.  I couldn’t find him laying out the dangers of deferred maintenance, calling out previous councils for their bait and switch balanced budgets.

It seems that The Wary I has been just as asleep at the switch as the citizens of Davis as to our fiscal crisis.  And after completely failing the public on this issue, he is now attacking the city for belatedly attempting to educate the citizens in areas where he has completely failed.

Without the work of Rich Rifkin, the Enterprise’s readership might be completely unaware of this problem.  How Mr. Dunning could simply ignore a crisis of this magnitude is frankly mindboggling.

How Mr. Dunning can bring up PG&E and the $1 million for the POU when we are facing tens of millions in unfunded liabilities for pensions and health care, and into the $100 millions for roads, parks, and other infrastructures.  Again, none of these have been covered by Mr. Dunning over the years.

At some point one must ask, why is that?  And why does he protest this after missing so much bigger problems in the city over the years?

37 thoughts on “Sunday Commentary: Asleep at the Switch, Yet Blaming Others”