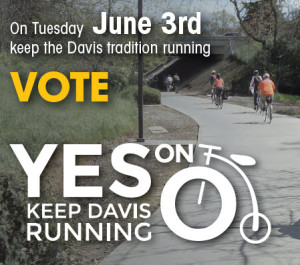 Going down to Farmer’s Market, I got handed a sneak peak of the just-run Measure O flyer, and I’m beginning to have some concerns about whether the campaign, just getting activated in the last month, is going to be able to do the heavy lifting needed to convince voters to increase the sales tax.

The bullet points are okay, but are a bit misleading.

They read: “Reinvesting in local jobs and infrastructure needs by funding long overdue water conservation projects and vital repairs to our roads, sidewalks and bike paths.” “Keeping our budget balanced by bringing in new revenues in conjunction with the budget cuts the city has already made.” “Maintaining funding for critical city services like police, fire protection, libraries, and parks.”

The second bullet point is probably most accurate. The council made the decision to segment off roads and parks and other infrastructure from Measure O.

But then it talks about being endorsed by a coalition we trust, and that includes the Davis City Council, DJUSD Board of Education, the Davis Police Officers and the Davis Firefighters.

Leave aside the fact that they erroneously identify Sheila Allen as the board president. She was last year, but Gina Daleiden is the current president.

The bigger issue that emerges is whether this is really a coalition that we trust. While I think the city council and the police officers have worked in recent years to earn back public trust, there are clearly segments of the population that do not trust them.

But the bigger problem is that, in the wake of volleyball-gate, I have heard in large segments of the community a fundamental distrust for the school board. There have been questions raised about the handling of that scandal, as well as the money spent on external investigations.

Then we have the firefighters that many believe are at the heart of the current fiscal state of the city. With regard to the firefighters’ association, that is certainly going to be a red flag to a lot voters. Is that really the case you want, going forward?

We are concerned here in particular, because it is May, the absentee ballots arrive as soon as tomorrow, and we are making the introductory case to the public. Yes, we know that the former city manager made presentations to a lot of groups of people on the budget in his last two months here, and, yes, they sent the budget piece out in the utility bills, but how deep does that connection go?

To illustrate this point, we continue with our series on letters to the editor. Here we have a letter that illustrates just how much education the people of Davis do not have on the state of our finances.

She writes, “For the first time in my life, I’m considering voting against the proposed sales tax increase, Measure O. I know that the city desperately needs more funds; however, the past City Councils have had their priorities all wrong.”

Now she’s goes on to flag specifics here, but the fundamental point I think she has right – past city councils have had their priorities wrong. What that suggests, at least to me, is (A) we still need to educate the public on the budget, and (B) the city council needs to rebuild trust that they have really caused to be changed.

Just read the comments from earlier this week in our Measure O article and you will see the comments of highly-informed citizens who question this measure.

The examples they cite? “(T)he choice of $800,000 to make Fifth Street better for bikers, while basic street repairs are in great need, and the $400,000 already spent for a municipal electric utility and $600,000 more already authorized. These show the council members have their priorities all wrong.”

They continue, “They have given away the store on pensions for police, pay raises for firefighters (36 percent from 2005 to 2009) and retiree medical benefits for employees, when Davis did not have the money for them. Finally, the council decided that we need new yard waste containers and that will save money. These containers will have to be gigantic to serve that purpose, and guess who will pay for these containers? Yes, we will … as if our DWR bills aren’t already high enough.”

I give the writer credit for knowing about the previous tax increase where the revenues were given away to firefighters, where they got a 36 percent pay increase from 2005 to 2009 that subsumed the $3 million in new revenues from the 2004 tax measure. Although, even there, the facts are a bit confused.

But everyone complaining about city spending is missing most of the big picture. The Fifth Street project was largely funded by grant money. What people are missing is where the bulk of the money is going – employee compensation. We have unfunded liabilities for employee retiree health care that at one point exceeded $60 million.

A large amount of the current budget deficit is increased costs for pensions that the previous council in 2009 was warned about, but never made the effort to address before the costs finally hit us three or four years later.

Ironically, a chunk of the current deficit was racked up when the firefighters and DCEA refused to agree to contract concessions. That’s about $500,000 from the current budget balance that we are having to address.

Then we have the unfunded roads, parks (in part because the council in 2012 only asked for $49 a parcel in the parcel tax, when they needed perhaps twice that much), and other infrastructure needs – none of which are addressed in this current tax.

But when the letter writer writes, “It frightens me to hear the council thinking of redoing the entryway to the city. Just think what that would cost.” They don’t seem to understand that that’s privately funded.

Post cards are not going to educate the public. It is May. And if the public doesn’t trust the coalition that they are supposed to trust, we may well see this tax go down.

The public has deep issues, real concerns, and even people who are supporting the tax because they do not see any other way are going to be questioning this campaign.

Fortunately, there really is no organized opposition.  As we saw on Wednesday, Jose Granda, who opposes everything, has not done his homework on this, does not understand the issues and continues to beat the same drum as though the half-cent/ half-percent issue is going to be persuasive.

So the city may eek by here, despite itself.

36 thoughts on “Analysis: How Will the Measure O Campaign Play Out?”