The Vanguard received a screen shot of a Dan Wolk mailer that asks, Who’s Opposing Dan Wolk, and lists off the villains – Big Oil, Insurance, Chemical, and Pharmaceutical companies and, of course, the ultra-villains, the Koch brothers.

Never mind that the Koch brothers only donated $6500 to a PAC involved in this race back in May 2013, before Dan Wolk was in the race and long before the FairPAC got involved. 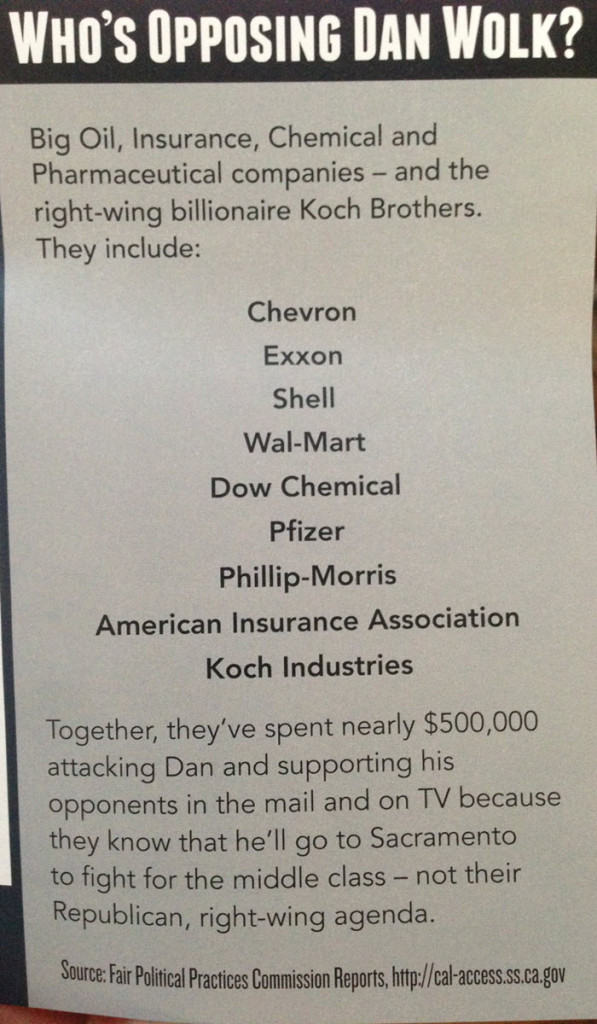 In their message, “Together they’ve spent nearly $500,000 attacking Dan and supporting his opponents in the mail…” The Vanguard fact checked this monetary claim and it proved factual. 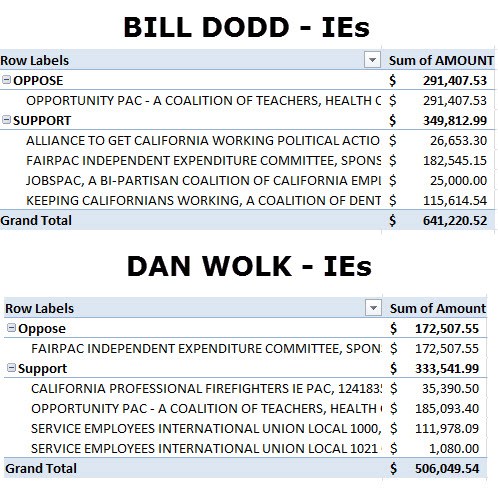 In fact, more than $1 million in Independent Expenditures have come into the race. A check at Cal-Access, the state website  on campaign financial information, revealed both sides have been pouring in tremendous amounts of money.

The Opportunity PAC, made up of various unions, which has been criticized by the Vanguard for making false attacks against Bill Dodd, has spent nearly $300,000 in opposition to Bill Dodd. It has another $185,000 in support of Dan Wolk.

The FairPAC, made up of conservative-leaning organizations, has expended $182,500 in support of Bill Dodd and another $172,500 in opposition to Dan Wolk.

The Wolk campaign draws some sort of distinction between the groups.

“But I do believe it is critically important to look behind these groups and follow their money and their motivations,” the mayor pro tem added. “Those supporting me are funded by teachers, nurses and firefighters. The PACs attacking me, and supporting my opponent, are funded by big oil, big tobacco, the pharmaceutical industry, the insurance industry and other special interests. Big tobacco doesn’t like my effort to keep e-cigarettes away from children. Big oil doesn’t like my support for a ban on fracking. It’s up to the voters to decide which side best represents them.”

However, both sides are engaging in distorted political attacks rather than addressing the critical issues facing the Assembly District.

The Opportunity PAC has tripled down on their false attacks. 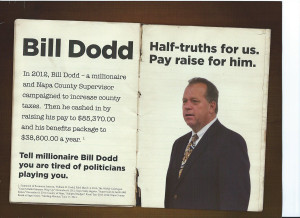 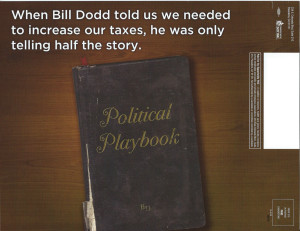 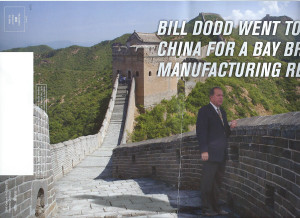 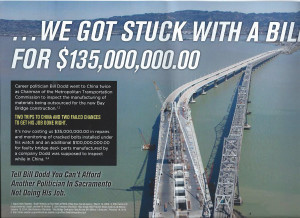 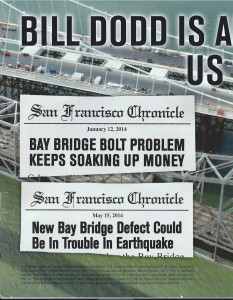 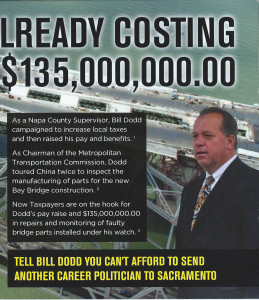 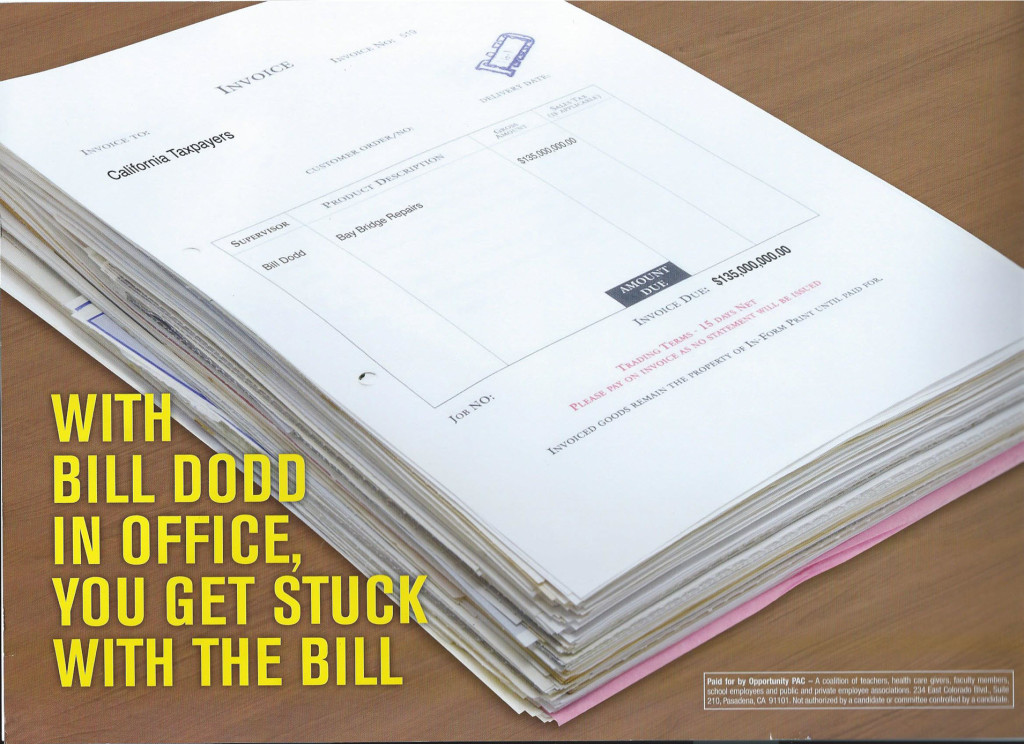 The Opportunity PAC has continued to attack Bill Dodd for the Caltrans Bay Bridge error. The Vanguard debunked these claims last weekend.

As Steve Heminger, Executive Director of the Metropolitan Transportation Commission told the Vanguard on Friday, “Bill Dodd did not pick (the bolts) and MTC didn’t pick them. The bolt specification was developed by CalTrans and issued by CalTrans.”

And, while both Mr. Heminger and Bill Dodd acknowledged that Bill Dodd went to China, the bolts themselves were manufactured not in China but in Ohio.

“The connection is pretty wild, I think,” Bill Dodd told the Vanguard. “This one is so far and away above my pay grade, it’s almost even comical that there’s even a connection.”

Meanwhile, they have also continued the pay raise attack. Despite multiple publications including the Vanguard pointing out, as the Napa paper reported, “The pay raises are mandated by Napa County ordinance, which ties the supervisors’ salaries to a percentage of Napa County Superior Court judges’ pay. Superior Court judges statewide are getting the same 1.4 percent pay raise, increasing their salaries from $178,789 annually to $181,292.”

Meanwhile, Davis Mayor Joe Krovoza continues to stay out of the fray.

“My positive, solution-oriented message resonates with people throughout the district, especially those who are tired of business-as-usual party politics,” Mr. Krovoza told campaign supporters in an email on Wednesday. “Special interests have spent nearly $1 million to support other candidates in my race.  By contrast, I have made a commitment not to issue any negative ads attacking my opponents, and I have demanded that my supporters stay positive as well.  I’m proud that our grassroots campaign is powered by people.”

In his letter to the Vanguard he stated, “There are plenty of policy decisions about which I disagree with my opponents, but the topics of these recent attacks are baseless and dishonest.  I appreciate that these lies have been thoroughly debunked by local press.”

The mayor would add, “Such attacks undermine meaningful political discourse at the time we need it most.  California faces great challenges as it climbs its way out of a devastating recession and grapples with a drought for which our state is inadequately prepared.  The debate should focus on solving problems, not on bickering about spurious attacks.”