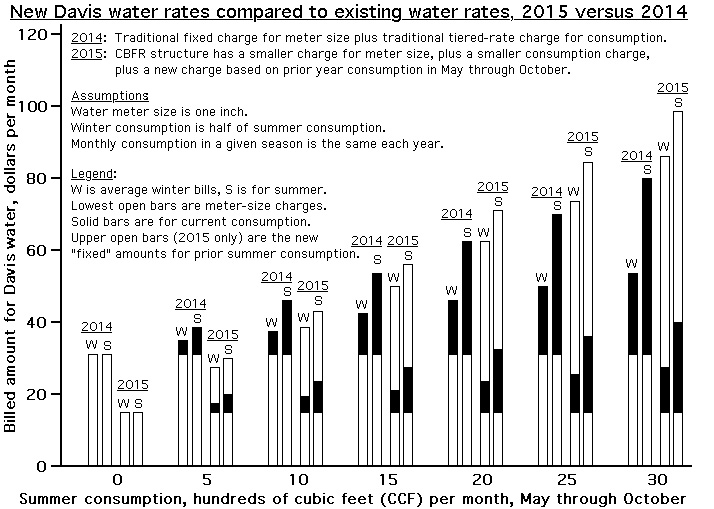 An Enterprise editorial on May 6 suggested that the Davis community doesn’t trust our future water billing formula known as CBFR (consumption based fixed rate).  CBFR has not been explained very well because words alone fall short, as do numbers and arithmetic alone.

The accompanying bar graph represents many calculations in one picture, comparing 2014 water bills to 2015 bills under CBFR.  Overall trends are revealed for single-family residential water users.  The bar heights indicate monthly dollars for average winter and summer bills as labeled, calculated from the tabulated numbers in last year’s Proposition 218 notice for CBFR.  Four bars are shown for each of seven different amounts of monthly water consumption.  For the sake of this particular graph, winter consumption in each case is assumed to be half of the labeled summer number, in agreement with typical single-family averages.

The total heights of the bars toward the left show that CBFR rewards summer conservation below 10 CCF per month, relative to 2014 bills.  For medium consumption, it can be seen that many water customers will pay only moderate cost increases next year.  The most significant difference for greater consumption will be higher winter bills in 2015.

The tops of all the bars also show that CBFR is closer to being a “per gallon” formula than our current rate structure, because the cost of zero consumption is closer to zero.

Individual parts of the bars offer further insight.  The upper open parts of the 2015 bars show the “supply charge” based on prior summer consumption.  While costly, the supply charge will be largely offset by reductions in the meter-size charge (lowest part of all bars) and the monthly consumption charge (solid parts).  If winter consumption differs from half the summer amount, there would only be a proportional increase or decrease in the solid parts of the winter bars, relatively minor overall.

The information in the graph offers voting guidance regarding Measure P, which seeks to repeal the CBFR plan.  Perhaps most importantly, a fear of misunderstood math complexity is a terrible reason to support Measure P.  When preparing the graph, calculations were more cumbersome for our existing tiered rate structure used for the 2014 bars.

If paying purely “per gallon” makes sense, then CBFR is preferred to our existing billing, so vote no.  Some customers are now forced to pay extra for having a larger meter, regardless of consumption.  CBFR charges less “per meter” with smaller dollar differences between meter sizes, a related reason to vote no.

CBFR increases winter bills based on summer consumption, which spreads out payments over time.  Variations will be smaller from month to month, providing smoother and more predictable city revenue for the river water project.  If it feels acceptable to have regular monthly payments for past purchases, a very common theme in our world, then vote no.

For relatively large families that have relatively small yards, CBFR won’t especially increase bills, so vote no.  While not painless for everyone, CBFR effectively places a higher priority on people than on grass.

Users of huge amounts of water should recognize that CBFR eliminates the very high per-gallon rate of the existing third tier, $2.87 per CCF above 29 CCF per month.  For unlimited amounts, businesses and apartment complexes now pay only $1.87 and $2.24, respectively.  The CBFR price per gallon will be the same for all high-end users, which in 2015 works out to $2.78 per CCF for year-round heavy consumption, less than Tier 3.

Considering California’s drought, it would be nice if we could all conserve water while also having the flexibility to buy large quantities cheaply.  Unfortunately, reality doesn’t work that way.  The simplest “per gallon” billing would assign equal importance to grass and people, thus not encouraging dry-season conservation, and it would make billing and revenue less steady and predictable.

The graph doesn’t show future price increases after 2015.  All the underlying numbers increase similarly, so the relative fairness of CBFR to different customers will not change.  For all the cases shown in the graph, total payments in 2018 will be roughly 50 percent more expensive than in 2015, ranging from 1.37 times for zero consumption up to 1.60 times for 30 CCF per month.

Some concerns raised have taken CBFR numbers out of context.  It is technically true that customers will ultimately pay almost $8 per CCF of summer water consumption under CBFR in 2018.  However, if we think of it this way, then we also have to acknowledge that winter consumption will be much cheaper at only $1.32 per CCF in 2018.

We can’t expect a magic alternative billing plan that pays for the new river water system, or any other water source, without increasing our bills over the long term.  Arguments for Measure P primarily rely on math anxiety and a fear of rising costs, without offering a better plan for billing or obtaining water.  My vote is no on P.

The high 2018 price of $8 per CCF for summer water is a mere penny per gallon.  The author has never been affiliated with the Water Advisory Committee that created the CBFR rate structure.  It is unfortunate that the term “CBFR” is somewhat an oxymoron (“consumption-based” is variable, not “fixed”).

It is also unfortunate that the Proposition 218 notice of January 2013 did a terrible job of explaining CBFR, with only words and tables of numbers (other than a couple of conceptual pie charts).

The document itself was not labeled “Proposition 218 notice,” even though that’s what everyone called it.  It contained ridiculous language, notably the repeated use of “established on the basis of” instead of simply “based on.”   The words “rate,” “fee,” and “charge” were used somewhat arbitrarily and interchangeably without definitions.

If the community decides to abandon CBFR for yet another new method of water billing, the goal(s) should be defined first.  The words “fair” and “unfair” have been used in discussions without any specific definitions.  Is it “fair” to place an equal priority on grass and people under severe drought conditions?  Ideal fairness is unfortunately elusive in most aspects of life, and will most likely continue to be elusive in paying for water.

John Whitehead is a Davis resident who once learned in a biochemistry class that key discoveries were made by people who plotted new kinds of graphs using existing data.  His lawn and garden are watered sparingly.