I listened to the water discussion on Tuesday night fully agreeing that the proposed revisions to CBFR will make the water rates both more fair and perhaps easier to understand for the citizenry. However, I found myself surprisingly strongly moved by the arguments made by Michael Harrington and John Munn about process.

One could look at the timing issue with some suspicion – after all, why would the council want to entertain rate changes a week before the election? If I did not know better, I would be screaming foul at this apparent bait and switch.

But I do know better. I know that the rate change impetus came not from the council but from the well-meaning work of citizens Donna Lemongello and Matt Williams, whose motivation was to make the system better. I also know that Brett Lee and Lucas Frerichs attempted to agendize this sooner but were thwarted.

Still, many citizens are not privy to this intimate knowledge of chains of events and they see something nefarious at work. Many will understandably see this as a last ditch effort to save the surface water project from impending doom.

This is embodied by the last slide in Matt Williams’ presentation, that addresses our liability risk, implying a yes vote on Measure P would cause the city to default on the project. Matt Williams, in his comments on the Vanguard, implied that information gathered from his canvassing efforts resulted in a belief in widespread disaffection with the water rates and a belief that Measure P could succeed and result in a calamity for the city.

It is therefore not invalid to suspect that Mr. Williams was motivated by electoral considerations.

“These rates are not equitable and put the burden of paying for the surface water project onto single family homes,” he stated. “Now, we are supposed to trust the City Council to change its mind and do the right thing? After putting this town through years of struggle, you can’t just say ‘never mind.’”

Instead, he argued, we should trust the voters and that “the only way we can be sure of getting new water rates is to vote ‘YES’ on Measure P.”

While the council didn’t and couldn’t actually change the rates on Tuesday night, they sent a strong message for the URAC to look at the new alternative at their next meeting.

At this late date before the election, with Measure P on the ballot, this process seemed problematic to me. The fundamental rules are shifting just a week out from an election in which probably most people have not voted. We’re going to greatly distort the voter signal in this election and that is going to make it more difficult going forward.

Previously we could argue that Measure P would be a clear signal – a Yes vote means that you want the rates to change, or you oppose the project all together. A No vote means to keep going.

Now Measure P almost devolves into a trust issue. A Yes vote on Measure P means you do not trust the council to fix the rates. A No vote means you do. Except that timing matters, because the meaning of Measure P has now shifted.

While Brett Lee was eloquent and passionate on Tuesday, he contributed to the muddling of the signal.

For Brett Lee, the bottom line is whatever happens with Measure P next week, “I want to change the rates.” He added that this is “the mechanics of the rate structure,” that he wants to see changed. “They’re complicated, people are understandably confused.” He added, “There is no need to have the complexity of the six month summertime look back.”

He also pushed the issue forward, stating, “I’m not really willing to sit on my hands for the next four weeks waiting until we have everything teed up. I know that I want to change the rate structure.” He said if you take the Proponents of Measure P at their word, they want a fair equitable rate structure, and “if we can deliver that tonight, then they should be happy.”

While in one sense you can admire the clear signal from Brett Lee, on the other hand, he seems to forget that we have an election and that must be respected. We need to at least find out what the voters want here, and now we probably can’t.

The disappointing part of all of this is that we have lost sight over a clear shortcoming in this process. In December 2012, we had this discussion over CBFR. While there were key shortcomings, the clearest advantage is that it took a system where meter size determined the fix rates and where the low end users were paying nearly 50% more per gallon than high end users and greatly equalized it.

During both the Measure I and Measure P campaigns the council largely sat back and allowed the critics like Bob Dunning and the Measure P folks to define CBFR.

Instead of going to battle and showing the citizens how much more equitable CBFR made the water rates, even as they would rise due to the water project, they allowed Bob Dunning to poke holes in it. CBFR became the poster child for unfair rates, instead of a system that brought much greater equity.

The summer water issue could be fully justified, understanding the notion of peak demand. But it turns out that there was a way to make the system even more equitable than it was already.

Why didn’t they do it sooner? Matt Williams addressed that issue on Tuesday when he stated,“The thing that caused us not to do this until now is that we were afraid that it would cause us to lose the protection of the resilient revenue that’s been fixed.”

“The white space that you see under the black bar is free water that people are getting,” he said. “Those are the highest users and they are paying for less water than what they are getting.” 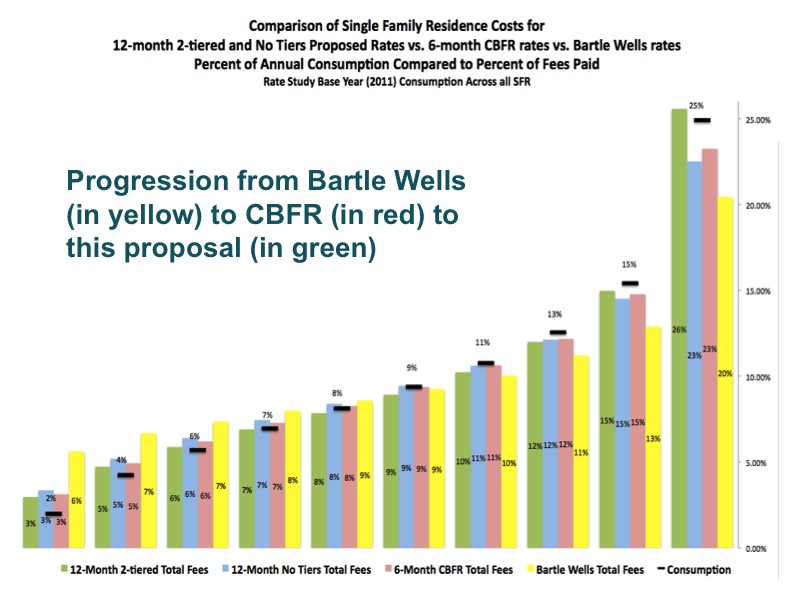 Who is paying for the high end user’s water? “The people that were most responsible, who were most efficient about using the water are paying 6% of the revenue right now and only using 2% of the water. That is not equitable!”

There is no doubt that the system that they have now devised is more equitable and better, but that does not mean the previous system was bad.

Still, it is disconcerting to read the comments made by URAC Chair Elaine Roberts Musser who stated,

Ms. Musser, of course, never supported CBFR, but the answer to her question is that we did the math and it produces a more equitable situation.

However, we would have preferred a better process here. At this last moment, it would have been better to have had the discussion about water rates after the election and after we got a clear signal from the voters.

Now we really have no way of knowing exactly what a Yes on Measure P or a No on Measure P really means, and unfortunately that will not put to rest this debate any time soon.