Rochelle Swanson Forcefully Pushes Council on Economic Development –Rob White was finally allowed to give his full presentation on Tuesday night, three weeks after his presentation was cut short by the lateness of the night. The Council agreed to allow the RFEI (Request for Expressions of Interest) process to move forward.

However, it was Councilmember Rochelle Swanson who passionately and forcefully pushed the conversation forward, relating her experiences in Washington on Cap-to-Cap and reading Congressman John Garamendi’s letter into the record.

Councilmember Swanson said of her trip to D.C., “This year I was lobbied. This year I was pressured. This year the region is wanting to know what are we doing and why aren’t we moving forward because they’re getting really worried because we have assets that nobody else has.

“There’s a lot of criticism in the community from certain pockets about things like the Cap-to-Cap trip and some of the investments we’re doing,” she said. “Usually when you go to these meetings, you thank them for the time and you tell them how you need help. Congressman Garamendi was very generous in that he gave us time to talk about Davis.”

Councilmember Swanson then read the letter into the record. 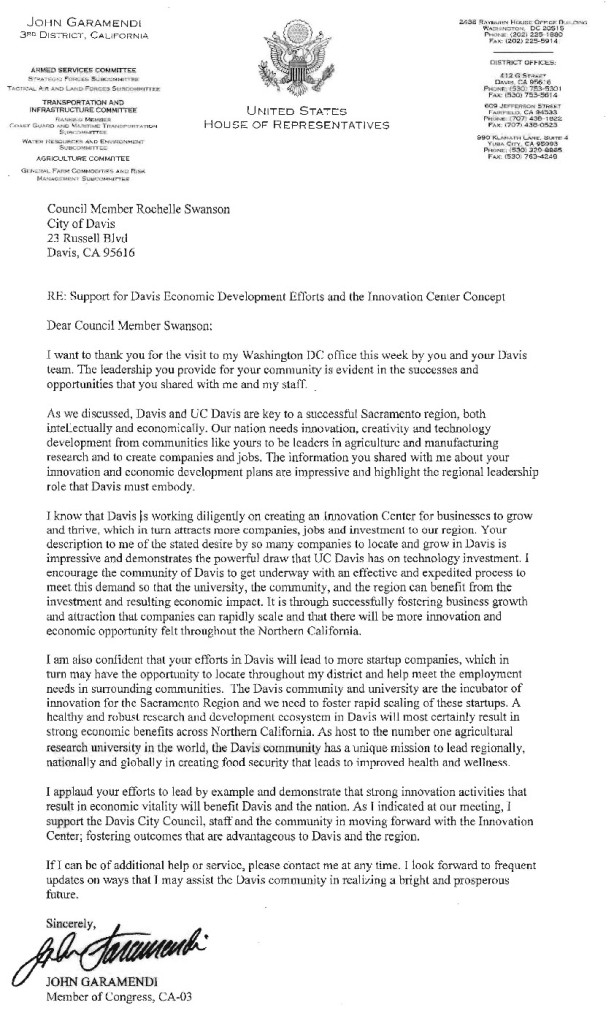 Councilmember Swanson said, “The reason why I share this, and maybe there is a sense of frustration, is that we have been talking for a long time about what we’re going to do. The innovation task force has been talking for a number of years. We’ve talked about waiting for proposals… I do worry that this search for the perfect is going to kill the good.

“We have support like no other,” she continued. “I was not an hour there at a reception and had at least six to ten people, many I didn’t know, who looked at my badge and said, ‘What’s up with the innovation center? What’s going on? How come this hasn’t moved forward? You know that we need you. We have companies asking us when things are coming on line.’

“Other communities around us are very literate, whether it’s their staff or their councilmembers on we have to work with these companies,” she said. “It was telling, people were asking why we just have a handful here, why is it just you. I applaud Sarah (Worley) coming out of her own pocket. Other communities they walk the walk, they don’t just talk the talk.

Rochelle Swanson referenced Paul Tsongas in 1992, saying, “He talked about how there are people on canoes and they’re rowing, and other countries are rowing and they’re all in step. And we’re standing up hitting each other over the head with paddles. When I see what the other communities are doing, they’re in lockstep. They get it. They’re rowing in order. And I think we still tend to beat each other up over certain things. I want to encourage us to really move forward.” 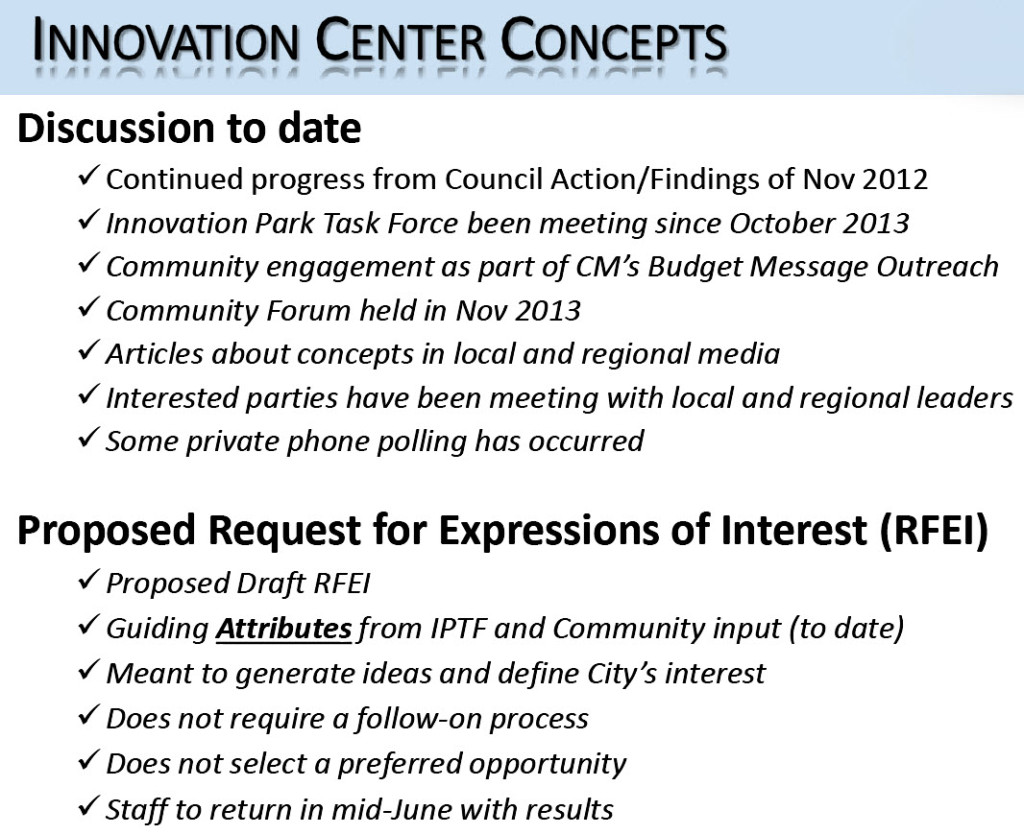 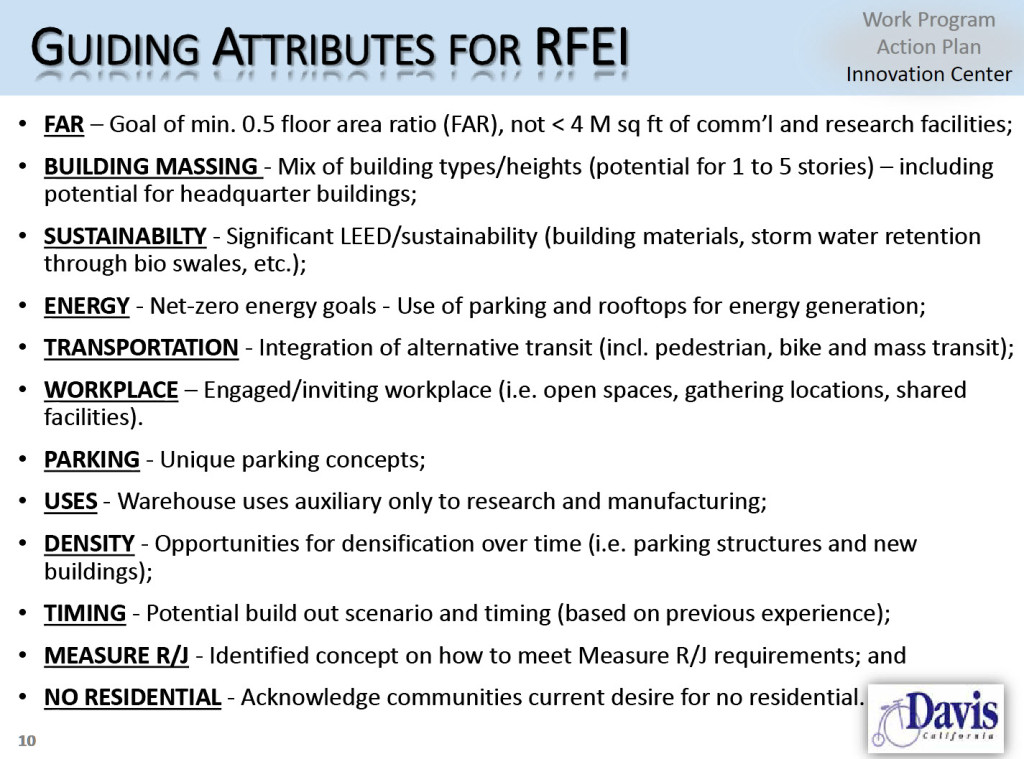 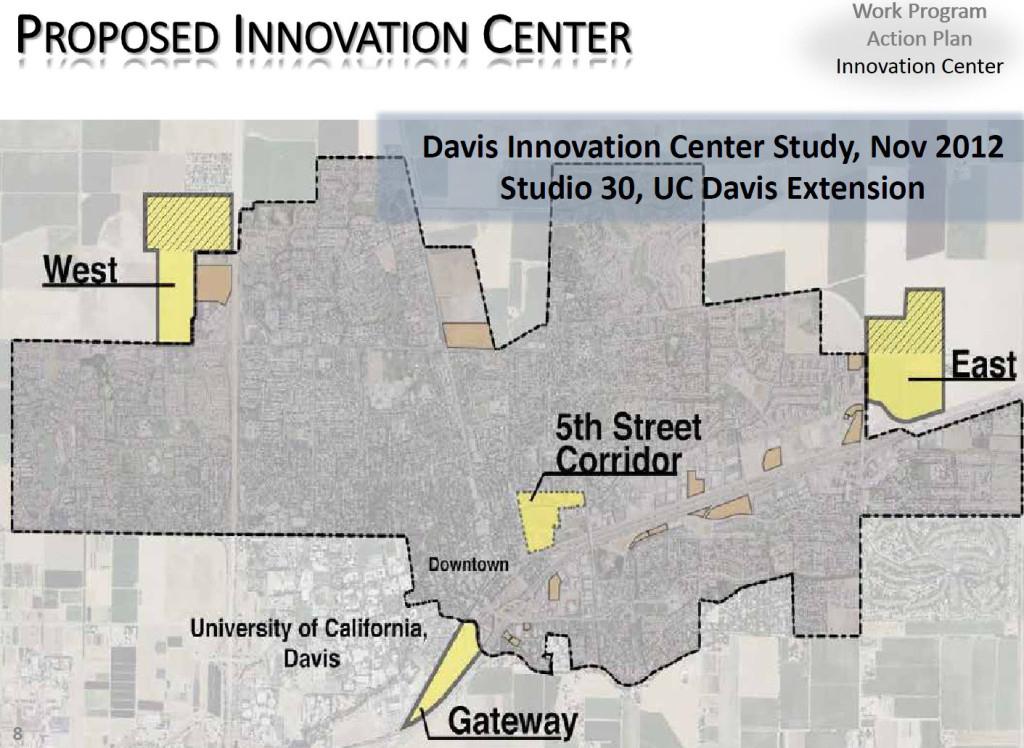 “What we’re looking for here is much more of a statement of interest and how they might meet these things, and much less of an absolute proposal,” he stated. “So I’m not as concerned about the time, I’m not worried if you want to stretch it another ten days. We start running into timelines of decision making, but that’s something, that’s a decision of the council.”

Councilmember Lucas Frerichs noted, “We’re going to get precious few opportunities to do an innovation center, one or more of them. I think they’re not necessarily going to be all that large in size or scope, so the key to me is to ensure that the opportunities exist to increase density.”

He again noted, this time without explicitly referencing Interland, that there are existing areas that are just not that dense. He said, “I would see it frankly as a wasted opportunity to have a single-story 200-acre innovation center.  I just think there needs to be an emphasis on density.” Councilmember Frerichs pushed for adding language that “increased density is desirable.

“I’m certainly supportive of this effort, having spent the previous three years, a year prior to being on the city council and two years since being on the city council, on the innovation park task force, we’ve talked time and time again about the notion of expanding this conversation to the greater community and throughout the region,” he stated.