One week before the election that may decide the fate of the city’s surface water project, the city council voted unanimously to direct the URAC (Utility Rate Advisory Committee) to examine the three rate systems that are proposed – CBFR, Bartle Wells, and a hybrid.

Councilmember Brett Lee directed that they could not consider a rate structure with a look-back and wants to see both a tiered and no-tiered option. Councilmember Lee stated clearly, “The current CBFR is precluded because it has the look-back.” He indicated that the hybrid structure proposed during public comment by Donna Lemongello and Matt Williams was acceptable.

Herb Niederberger stated that he did not know if the consultant could work fast enough to get the hybrid CBFR to the URAC in time for a meeting next week, but stated that he would try.

Former Mayor Sue Greenwald would come out in favor of the compromise.

Why the late timing? Matt Williams explained, “The thing that caused us not to do this until now is that we were afraid that it would cause us to lose the protection of the resilient revenue that’s been fixed.” 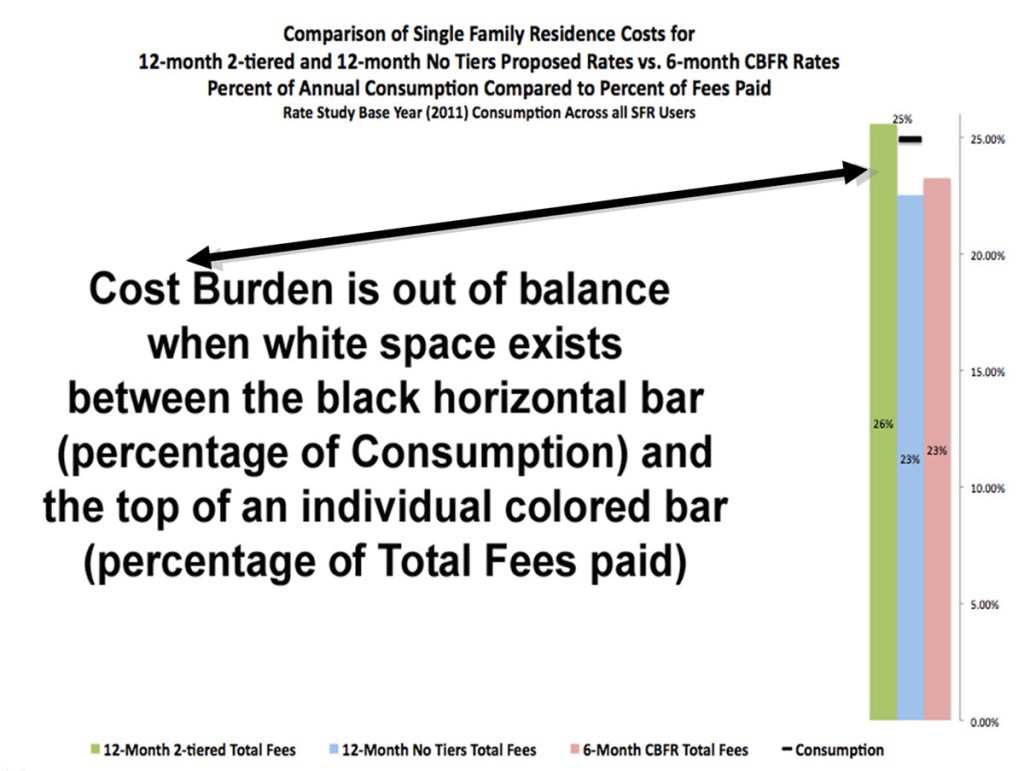 “The white space that you see under the black bar is free water that people are getting,” he said. “Those are the highest users and they are paying for less water than what they are getting.”

Who is paying for the high end user’s water? “The people that were most responsible, who were most efficient about using the water are paying 6% of the revenue right now and only using 2% of the water. That is not equitable!”

The compromise plan was not without its critics. Several proponents of Measure P cried foul at the last moment offer that seemed to them an attempt to save the water rates and defeat Measure P.

Michael Harrington, who was the original sponsor of the water referendum, the lawsuit and the water rate initiatives, told the council, “The burden is on the city council to come up with fair, lawful rates.”

He added, “It’s unfortunate that these proposed changes come up so late… Changes need to be made but it’s the city’s issue to come up with those (changes). “

He said he disagrees with Bob Dunning that we need definitive action right now, instead arguing, “It needs to be careful and thoughtful.” He said no matter what, the rates have to go up to pay for the project, the only question is “whose ox do you gore.”

He concluded, “So if we’re going to radically change the rate structure, you have to have a rate study that’s updated for that.”

John Munn, the only candidate for city council who favors Measure P, said, “We are pleased that the City Council finally recognizes the need to revise the current water rates structure, but it is too late to jump ahead of Measure P with a new rates proposal.”

“These rates are not equitable and put the burden of paying for the surface water project onto single family homes,” he stated. “At the same time, the Council borrowed money to keep water rates low for two years, after which it would be too late to do anything about the much higher rates next year. But concerned residents didn’t wait for two years. Instead, we qualified Measure P so that people could vote on their water rates.”

He argues, “Now, we are supposed to trust the City Council to change its mind and do the right thing? After putting this town through years of struggle, you can’t just say ‘never mind.’”

Instead, he argued, we should trust the voters and that “the only way we can be sure of getting new water rates is to vote ‘YES’ on Measure P.”

It was not just the proponents of Measure P crying foul at the late timing. URAC Chair Elaine Roberts Musser and member Johannes Troost both argued that it was too late to change the rates.

Elaine Roberts Musser told the council, “The ballots have already been printed, they’ve gone out, people have voted. You have to let the process take place. Wait until Measure P passes or doesn’t pass. The URAC is ready to deliberate, to give you the best advice possible.”

She concluded, “I would ask that you allow the URAC to carry out its mission.”

Early in the discussion, Joe Krovoza worked hard to attempt to put off the discussion and throw it to the URAC. However, he was clearly out-numbered on that issue and Brett Lee forcefully argued his case.

He would argue he wants to re-design the rates regardless of the outcome of Measure P, that CBFR is not calculated as he thought it was and therefore he was ready to talk about substitute rates and ready to do it tonight.

As he explained, “The Measure P folks, their whole goal is to have us look at the rates.” He stated, “Measure P doesn’t say anything about the rates that replace them, it simply rescinds the rates.”

He argued that, by replacing the rates in a simpler and easier to understand manner, “Measure P folks should be pleased, if they don’t trust us they can still vote yes.”

He continued, “For the opponents of Measure P, their concerns are that really what the Measure P proponents are really trying to do is tie up the water project in potential legal battles, because they look at the proponents of Measure P and see that those are the same people who sued over the water rates, those are the same people who opposed Measure I and so their concern is not so much that the rates are perfect, let’s keep them as is, the opponents of Measure P really want us to address the rates in a responsible way, but they would like to see the project move forward in the least costly way possible.”

For Brett Lee, the bottom line is whatever happens with Measure P next week, “I want to change the rates.” He added that this is “the mechanics of the rate structure,” that he wants to see changed. “They’re complicated, people are understandably confused.” He added, “There is no need to have the complexity of the six month summertime look back.”

Brett Lee lamented all of the delays in the process. He stated, “One thing I’ve reflected upon in my two years up here is how little I’ve accomplished.” He said he has thought about “the differences I’ve made and they’re quite small.”

He stated, “I’m not really willing to sit on my hands for the next four weeks waiting until we have everything teed up. I know that I want to change the rate structure.” He said if you take the Proponents of Measure P at their word, they want a fair equitable rate structure, and “if we can deliver that tonight, then they should be happy.”

Lucas Frerichs, who would second the motion, argued that they are trying to get to a solution that works for the community. He said he personally appreciates, regardless of the outcome, that we will be looking at adjustments.

Joe Krovoza said that he was inclined to support the motion by Brett Lee based on the understanding that it is building off the current Prop 218 rates, which Brett Lee agreed with.

47 thoughts on “Council Directs URAC to Alter the Water Rates”