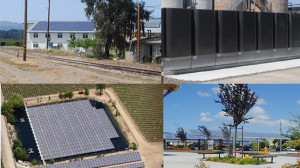 In a surprise move Tuesday night council passed, by a 4-1 vote,  a motion put on the floor by Councilmember Brett Lee  to rescind the authorization of a $600,000 expenditure that was to be used to study the option of the City of Davis forming a Publicly Owned Utility.  Lee’s motion received support from Councilmembers Lucas Frerichs, Dan Wolk and Rochelle Swanson.  Mayor Joe Krovoza dissented.

The staff recommendation made to council that night included approval of a work program that “specifically describes activities and tasks to be undertaken over the next six months that would enable staff to continue the due diligence process, educate the community about public owned utilities and develop partnerships with community groups that would collaborate with the City in its efforts to achieve its energy goals and objectives.”

Frerichs’ and Wolk’s vote to pull support for the funding was a departure from their previous stance on this issue.

At the March 25 council meeting it was Councilmember Frerichs who put forward the motion to authorize the city manager and the city attorney to move forward on a set of actions that would allow for a decision to be made regarding the possible formation of a municipally owned utility.  After moving the motion, that was seconded by Wolk, Frerichs suggested that staff recommendations include the hiring of a project specific manager to guide the city’s efforts.

A vote was delayed on the motion that night after Councilmember Brett Lee expressed concern that some key questions regarding the process of moving from a investor owned utility (IOU)  to a private owned utility (POU) had yet to be addressed.

At the March meeting Lee stated, “I think before we agree to spend, or authorize to spend this fairly large amount of money we should at least be able to talk confidently about some actual real numbers. I’d like to talk to somebody about when they made the effort to go to a POU. We will likely end up in court and there will be legal cost involved.  I don’t know whether this will be millions of dollars in legal fees or whether it will be 10s of millions in legal fees. I don’t know whether the journey is a 1 year journey or a 10 year journey.”

Councilmember Lee, with support from Swanson, requested that staff return with some examples of jurisdictions that have made the transition from an investors owned utility to a publicly owned one.

This information was not contained in Tuesday’s staff report and was cited by Lee as one of the reasons for his motion to rescind the $600,000 expenditure. Lee reiterated his support for examining the possibility of transitioning to a POU. He stated that the magnitude of the potential savings to the City of Davis and its residences warranted us looking into it, but he felt that the city should not be spending money to do some of the basic fact gathering and community outreach laid out in the staff report.

Instead, Lee called for the various community groups who support this effort to step forward and do some of the early, ground laying work. He stated, “I’m not supportive of spending this money, I’m supportive of asking people to help volunteer to provide this information.”

Mayor Pro-Tem Wolk also noted that the examples provided in the staff report, of entities that have made the transition from a IOU to a POU, were not analogous to Davis.  “Davis would be unique in what we are trying to do in terms of moving from an IOU to a POU,”  said Wolk, after which he expressed concerns over litigation and the fact that, “while we were already being asked to spend quite a bit of money, it could end up be being more.”

Lucas Frerichs expressed interest in reexamining the Community Choice Aggregation (CCA) option. A CCA is a state policy that enables local governments to aggregate electricity demand within their jurisdictions in order to procure alternative energy supplies while maintaining the existing electricity provider for transmission and distribution services.

He made the assertion that it was unlikely that a POU would be able to be formed in the next few years and that the CCA route – especially if the city worked in conjunction with partners in county – could be a much more achievable reality. He noted that the likelihood of success versus the amount of money we would have to spend on creating a Davis-specific POU is something he was having concerns about, and thus he was not in favor of pursing the $85,000 for the scope of the work that was listed in resolution.

Councilmember Swanson stated that she shard Lee’s concerns about the lack of concrete examples of the what the process would be like. She mentioned the numerous concerns the public has expressed to her over the proposed expenditure and stated that she would “hate to see the unintentional consequence of this is that we loss support for public power, or we lose support for a POU because we are not going through the steps.”

After noting her support for Councilmembers Lee’s motion, Swanson clarified, “This is not saying no to the idea of a POU, its about being responsive in this snapshot of time to be able to focus on bigger priorities.”

Mayor Krovoza was in clear opposition to Lee’s motion stating, “I’m not going to support this motion. I like the idea of doing the next $85,000. I am comfortable with these recommendations, I think they move us forward judicially with lots of community volunteerism.” He stated that he believes staff addressed community concerns about spending $600,000 by coming forward with a scaled back and reasonable amount.

In his final comment he said, “I want it to be clear that this in an attempt by our council to save hundreds of millions of dollars for our citizens. I think if we are interested in being responsive to our citizens concerns about us spending too much money that this is one of the most dramatic things that we can do.  I do think spending $85,000 to see if it is feasible to save 130 million over 30 years is wise.”

After the motion to rescind the $600,000 passed, Mayor Krovoza made a motion to approve staff recommendation and authorize $85,000 to be spent on considering whether or not a POU would be in the best interest of the community.  The motion did not receive a second and failed.