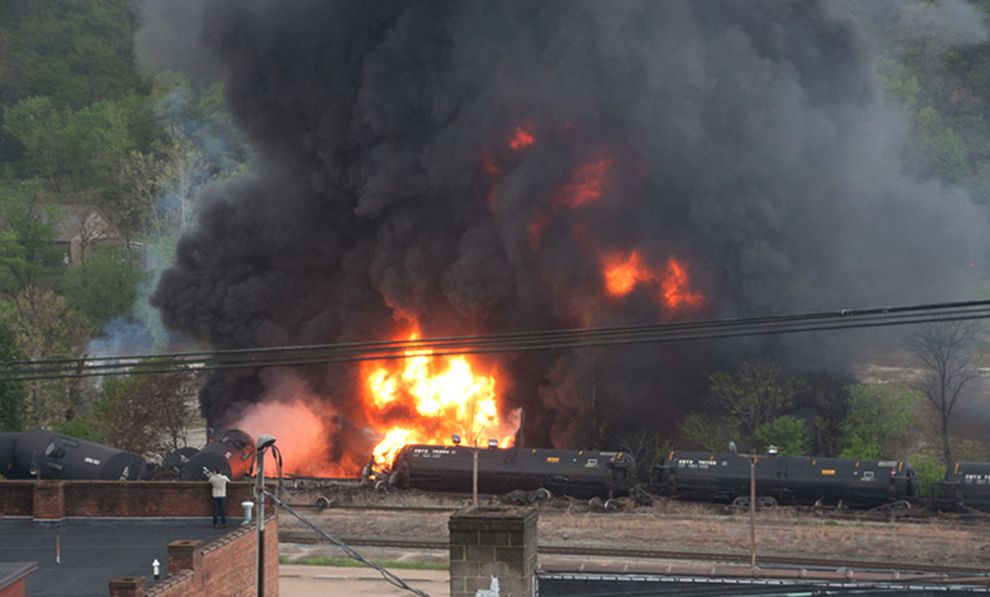 The Sacramento Metro Chamber has now put out a position piece on the increasing concern regarding crude oil transportation concerns in the wake of the most recent crash in Lynchburg, Virginia, that fortunately did not result in the loss of life.

The city of Davis has put forward a resolution whereby the city of Davis would oppose crude by rail transport through our community due to public safety concerns until further consideration, including understanding of risks and needed mitigation measures.

What is clear from the resolution is that the council lacks much ability to control what is transported through the Davis on rail. It requires probably a federal response.

“It is critical that we develop the highest safety standards for transporting oil by rail, especially since this dangerous cargo passes by Davis and several other communities in my district. This is an issue that has been raised at town halls in my district, so it’s very much a concern of my constituents. The House Committee on Transportation and Infrastructure held a hearing on this urgent matter and the Department of Transportation is crafting new rules. I will push them to write the strongest possible guidelines,” said Congressman John Garamendi (D-CA-03) in a statement to the Vanguard on Monday.

Davis City Staff noted in the April 22, 2014 staff report, “The U.S. Department of Transportation recently classified crude shipments by rail as an ‘imminent hazard.’ It is taking steps to mitigate some of the risk, including testing of Bakken crude oil to ensure that proper safety measures are used during transport by the shipper, regulations to improve tank car safety, and a voluntary agreement to slow crude trains in urban areas and install safety equipment to respond to accidents.”

Staff adds, “How timely, or effective, these requirements will be in improving safety is not yet known.”

They add, “Mitigating the impacts of transporting crude and other commodities by rail has been a challenge, as the railroads and other entities involved in the transport of crude claim they are subject to federal law but not to California law. They are asserting federal pre-emption and arguing that other agencies have no authority to mitigate their impacts.”

At the same time, staff argues this is not the complete story. They write, “This is not the complete story. Every permitting agency — cities, counties, and air districts — has the authority to deny land use and other permits if the applicant refuses to mitigate impacts. San Luis Obispo has authority over the land use permits to build the rail terminals that the Phillips 66 Santa Maria refinery is requesting. The City of Benicia has the land use authority over the Valero project.”

The Sacramento Metro Chamber put out a more generalized call for emergency response preparedness and hazard mitigation capability for energy-related emergencies, including pipeline and rail.

They are looking to provide support for what they are terming “a missing piece of the puzzle,” “whereby transportation and distribution funding streams are largely absent at the local level for preparedness and continuous training to address increased risks associated with natural gas and crude oil conveyance.”

The Metro Chamber, however, takes a position different from the Davis City Council, arguing, “Given the capability limitations of our existing pipeline infrastructure, the parallel increased use of Class I railroads for the distribution of these energy resources makes solid logistical and economic sense.”

They continue, “We credit the U.S. Department of Transportation for their newly released Emergency Order strengthening transportation requirements and the PG&E Pipeline Safety Enhancement Plan, however there is a piece of the puzzle missing.”

That piece, they write, is that “[t]hese recent energy commodity distribution safeguards have resulted in lowering some risk yet overlook stable continuing education and training funding streams commensurate with the increased risk associated with rail distribution.”

• Increasing regional capability is about ensuring the appropriate individuals have access to training at state of the art facilities that incorporate clean technology.

• The most efficient use of these dollars is by regional fire and hazardous material training facilities that can support students and educators from a number of states.

• Ensure all disciplines are aware of transportation and distribution operations; to provide awareness and hands on training allowing responders to understand what a compliant program looks like; and in the unlikely event of an accident, to provide programmatic templates that support and protect the first responders and the community.

They conclude, “The Sacramento Metro Chamber is a strong proponent of efforts to create national energy independence by tapping domestic natural resources. We understand the importance of building a sustainable network of distribution mechanisms throughout the State and Nation. We do understand there are potential risks (as seen in recent headlines) and seek to create collaborative solutions to ensure these risks are minimized and that local first responders are prepared to address any emergencies resulting from rail and pipeline distribution of these resources.”

Is this enough to stem the growing concern? The Associated Press noted last week that the Lynchburg incident represents only the latest of several oil train accidents in recent months. Earlier this year, “Pennsylvania saw two derailments within weeks of each other: a CSX freight train carrying crude derailed in Philadelphia in January, nearly toppling into the Schuylkill River, and a Norfolk Southern train carrying Canadian crude wrecked and spilled between 3,000 and 4,000 gallons of oil in western Pennsylvania in February.”

They add, “And in North Dakota last December, a train carrying crude collided with another, engulfing 21 cars in flames and spilling an estimated 400,000 gallons of oil.”

While no one has been injured in these accidents, the AP reports that “the rapid rise of oil shipments is raising fears of an explosive derailment like the one that occurred last summer in Lac-Mégantic, Quebec. That accident killed 47 people and leveled the town’s center. Train service through Lac-Mégantic resumed in December, but the town has banned the transport of hazardous substances, including oil.”

In the meantime this issue is not hypothetical for Davis. Benicia has not made a final decision as to whether they will allow crude oil to be transported from their refinery.

As Lynne Nittler, Milton Kalish, and Matt Biers-Ariel wrote in a Vanguard editorial back in February, the number of oil trains nationwide is expected to increase significantly in 2014 and beyond.

“Crude-by-rail is skyrocketing in California.  According to the California Energy Commission, in 2013 railroads hauled more than over 6 million barrels of crude oil in California.  In 2014 that number may jump to 50 million barrels or more, and by 2016 rail transport is expected to reach nearly a quarter of California’s total oil consumption, or approximately 140,000 barrels per day,” they write.

The immediate risk is that Valero has petitioned “Benicia to allow the oil refinery to enlarge its train terminal in order to increase its production by 70,000 barrels of crude every day. That’s enough to fill 100 sixty-foot-long tank cars with highly flammable crude oil.”

As they warn, “There are major problems posed to the communities and the sensitive areas the trains pass through.  The unsafe tank cars with their volatile cargo pose an immediate and serious safety risk.”

They note, “If the Benicia Valero Project is approved, trains carrying highly flammable Bakken crude oil in the outdated DOT-111A tank cars (intended for non-flammable liquids such as fertilizer) will pass through the center of Davis after crossing the Yolo Bypass on trestle tracks. The propensity for these tanker cars to rupture and explode on impact and to corrode inside is now well-documented.”

They add, “Furthermore, it’s becoming clear that the chemical composition of Bakken Shale oil itself is highly explosive and corrosive.  In addition, there are new challenges for rail inspections and the enforcement of existing safety codes with the sudden increase in long, heavy oil tank trains.  The safety of our families, our community and our environment will be increasingly at risk.”

In mid-February, Mayor Pro Tem Dan Wolk wrote a letter to Benicia Mayor Elizabeth Patterson stating, “I am writing to express my and my constituents’ serious concerns over the proposed upgrading of the rail terminal at the Valero refinery to take in as much as 70,000 barrels of crude oil a day… The proposed upgrade would substantially increase the amount of crude oil passing through our community and others along the rail line each day, with much of that oil coming from the Bakken Shale in North Dakota.  This oil appears to be more explosive, as demonstrated by the tragic accident in the town of Lac-Megantic, Quebec, last year which killed 47 people when a train carrying such oil derailed.”