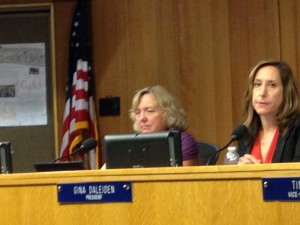 The volleyball scandal early this year exposed the district’s complaint procedure as being out of date and too inflexible to attempt to handle matters at a lower level than a formal complaint. On Thursday, for the first time, the school board had a discussion on the issue and began to shape an understanding of how to revise the procedures.

As staff notes, “As a matter of law, any person has a right to file a formal/written complaint in the DJUSD.  The majority of these complaints are resolved immediately at the site level or with minimum intervention from District administration.  Also as a matter of law, any complaint at the site or district level may be appealed if the involved parties are not satisfied with the investigated outcomes.”

The district wants to encourage the parties to handle matters at the lower possible level. Superintendent Winfred Roberson argued that there are opportunities for restorative practices in our current forms.

He noted the language in the policy, “The Board encourages the early, informal resolution of complaints at the site level whenever possible and appropriate.”

It adds, “The Board recognizes that a neutral mediator can often suggest a compromise that is agreeable to all parties in a dispute. In accordance with the uniform complaint procedures, whenever all parties to a complaint agree to try resolving the problem through mediation, the Superintendent or designee shall initiate that process.”

“While the forms themselves do not state ‘restorative practices’ it’s implied there. We’re trying to bring parties there to resolve at the lower level so that it does not have to escalate,” Superintendent Roberson stated. He said the district is raising awareness of restorative practices across the district. “So there’s an opportunity to integrate this into these particular forms and we would like to receive direction from the board as to whether or not we want to integrate all three of these to include specific language about restorative practice and have discussion about where and what that might look like.”

Trustee Tim Taylor said, “I think it’s helpful that we have training in that regard, but I think it’s helpful to remember what we are and who we are. We’re a district of educational professionals and administrative professionals, we’re not mediation professionals. So I’m certainly not suggesting that every time you go to the outside mediator service at cost but there are reasons those folks exist to do this on a full-time basis and for disputes that have the possibility to blow up into something far more contentious, far more expensive, using the right services to solve the problem before really it really explodes is very very cost efficient.”

He said while they can do some of this in house, he was suggesting that they cannot do all of them.

Alan Fernandes noted that the form takes you right into conflict mode. That’s a view that Board President Gina Daleiden agreed with. “Nowhere on this form does it hint that we have a policy that states that we want a lower level resolution and that is important.”

Mr. Fernandes said, “What I’m hearing is that we’re all sort of in agreement that a more holistic approach is warranted.” He also noted that each policy and complaint form were done at different times and there is no consistent system.

Gina Daleiden noted that the volleyball scandal highlighted the weakness of the current policy. “I think we’re all now crystal clear we want some ways to address issues before they blow up and we end up thousands of dollars into something… People come out the other side and don’t feel any better.”

She said sometimes an organization has complaints that do rise to a serious level. “I would expect anything that has to do with criminal behavior should never be investigation by (DJUSD) that should instantly be turned over to the police,” she said. “There are very few complaints that actually are that serious in nature and a lot of complaints that are felt to be very serious by the people involved… but it’s conflict that could be resolved… with some mechanisms in place.”

Tim Taylor had some concern, “Here’s the part that I’m concerned about what you said… The pinnacle complaints or issues that are automatic and you would say these warrant investigation no questions asked.”

He continued, “I’m hearing in my head, a comment from a lawyer that we have heard and I think it’s very important to reiterate there and this is why I want to draw the line of distinction between what we’re talking about here and the complaint process.”

He stated, “100% of the complaints that come in are investigated, 100% that can never be 99.9% it can never be 3%.” He said, “Somebody files a complaint we can’t just say well this one doesn’t rise to the level of investigation. Now where that investigation is conducted it has to be done appropriate for the circumstance but if you don’t look behind the curtain which is what the investigation is, that one time when you don’t and miss something very very serious the entire district is at risk.”

His view was that they needed a pre-complaint process that does not require a formal lodging of the complaint.

He was concerned with the power imbalance between the teacher and the principal in this process. “I think the process has the potential to if not implemented incorrectly, to replicate power imbalances within the district.” He noted, “The principal has a lot more power over me as an educator than over the student and the parent.” He said that since the district has little power over parents in general, “Many times teachers bear the brunt of any actions that come from this process.”

He wants people trained other than administrators to break up that power imbalance. It was a view that Superintendent Roberson indicated he completely shared. “I think what Blair said is absolutely right,” Mr. Roberson stated. “There are others in the district besides administrators that facilitate a process like this.”

Our biggest concern remains the lack of oversight by the board prior to the appeal process. As Gina Daleiden has noted, “Generally speaking, the Board is not involved in the complaint process because we may become the appeal board and the concern is that we remain impartial.”

But that view perhaps needs to be modified in the wake of some of the issues that arose out of the volleyball controversy.