If we take their arguments at face value, the supporters of Measure P really do not believe its passage will kill the project, then the alternative is that they oppose CBFR. That puts them in an interesting place because the alternative to CBFR is a Bartle Wells fashioned rate structure which puts heavy emphasis on meter size which means that low end water users pay a disproportionate share of the new costs.

Given the water project, there is no avoidance of higher rates. The only question is who that burden should fall on. If you follow through the yes on Measure P arguments, it becomes clear that burden in their view should fall on low end users.

How significant is the burden that the Bartle Wells fashioned rate structure puts on low end users?  The best way to illustrate that difference is to look at various use levels and compare the proportion water consumed versus the proportion of revenue paid for that water.  The graph below was produced by Robb Davis from 2011 actual use data provided to the WAC during its deliberations.  The data was extensively examined by Bartle Wells, City staff, myself and others during the WAC process, and served as the foundation of the 2013 Cost of Service Study, the Bartle Wells Rates and the CBFR rates approved by the ratepayers in the 2013 Proposition 218 Notice process. 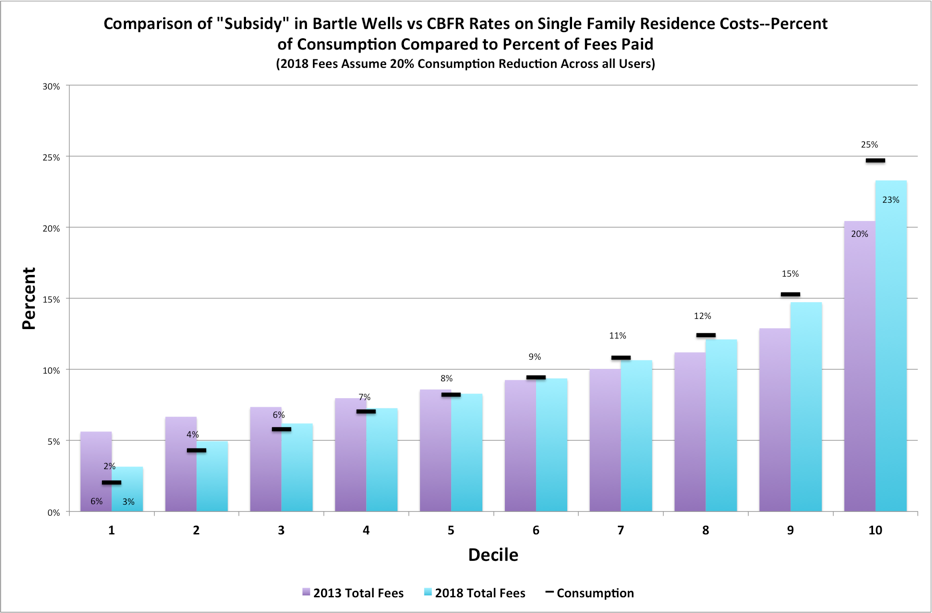 The graph above illustrates the extent which different groups of single family residence user groups are burdened (or not burdened) by Bartle Wells and/or CBFR. Robb did this in a straight-forward way by asking the proportion of water each consumption decile uses and the corresponding proportion of total costs that decile bears. If there were no subsidy (and true Proposition 218 proportionality), each decile would use and pay in the exact same proportion (consume 10% and pay 10% of the total cost among the whole single family residential class for example).

In the graph the horizontal black lines indicate the percent of all consumption by that decile based on the data presented to the WAC.

What this graph shows is that under the Bartle Wells rate structure the lowest consumption decile (labeled 1 in the graph) was expected to consume only 2% of the water consumed by all single family residences, but pay 6% of the total water fee revenue. That three to one ratio stands in stark contrast to the highest consumption decile (labeled 10 in the graph), which was expected to consume 25% but pay for only 20%.

Lower groups will probably always pay a slightly higher proportion than they consume because they are spreading the fixed rate component of the rate structure across a significantly smaller volume of water.

This graph clearly shows the extent to which Bartle Wells produces significantly more burden on the lowest consumption users.  That brings us back to the point we made in today’s Measure P: Sue Greenwald versus Ed Schroeder article  If you follow through the yes on Measure P arguments, it becomes clear that burden in their view should fall on low end users.

My question to the supporters of Measure P is, Why do you want to burden the low end users so heavily?  Nothing in their literature or oral arguments answers that fundamental human rights question.

11 thoughts on “Who bears the burden of a Yes vote on Measure P?”